I experienced a major growth spurt when I was ten and I feel like I’ve been hungry ever since. Because of this, pre-race food is very important to me, otherwise I get dizzy and lethargic.

We had Tim Hortons breakfast sandwiches before the Harbour Passage 5k (race #2 of the Port City Challenge in Saint John, New Brunswick). I found out that most places wouldn’t be open before our Sunday race (race #3), so we planned ahead and bought oatmeal and yogurt cups that we could keep in our hotel fridges and eat in the morning. I’m glad we’ve learned a thing or two from our other runcations.

As we headed over to the 5k race start I realized that I was going to get overheated so I ended up taking off my arm warmers. I’m so glad I did because it ended up being a cloudless, sunny August day, which is a recipe for hot running weather. The race course was the same as the Into the Night 5k that we ran the night before. The atmosphere felt very different during the day. Maybe it’s because I don’t know the area but it felt like a different race course to me altogether. I decided to try to run the course evenly, but still save something in me for my half marathon the next day. We lined up at the start and after the anthem played we were off. 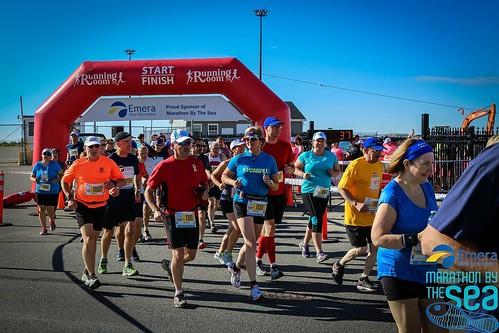 Me, Dan and Kristen at the start of the race. Marathon by the Sea provided free race pics!

Dan ran with Paul and the rest of us ran separately. By the time I hit the 3k point I was ridiculously hot so I stopped for some water. After the turnaround I followed a 10 year old girl who was running who was keeping, what I thought, a good pace. I’ve decided that 5ks are the most challenging for me because I’m just not a fast runner. I’ve noticed that I tend to slow down after 3k, and then pick it up again for the last kilometre. This will be something to work on in 2016.

After following the girl for a while I saw a kid with a sign that said “Push this button for a speed boost,” so I pretended to push it. He was very cute. I wish it really could give me a boost, though it did help motivate me to pick up the pace. I crossed the finish line in 27:03, which was only 13 seconds slower than the 5k that I had run the night before. I was happy with that time. 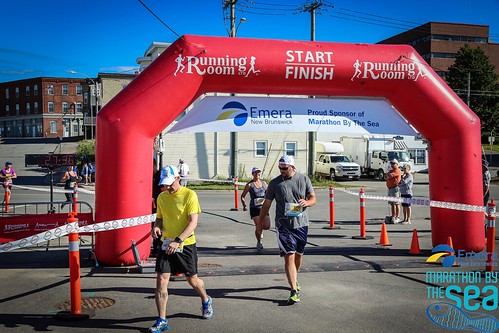 Finishing the 5k. Photo courtesy of Marathon by the Sea. 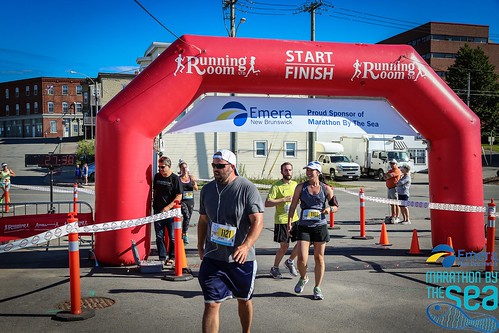 Right after I crossed the finish line. 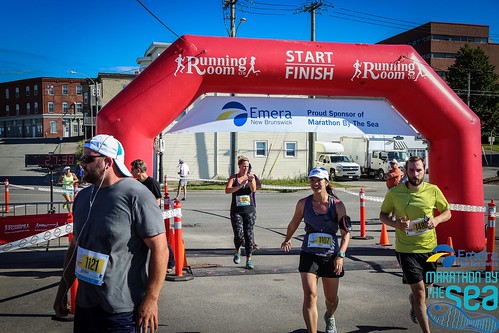 I was happy with my time.

Once again they had chocolate milk at the end of the race and we waited and watched everybody else cross the finish line. We collected our medals, took pictures and then headed back to the hotel to shower and get ready for the day. 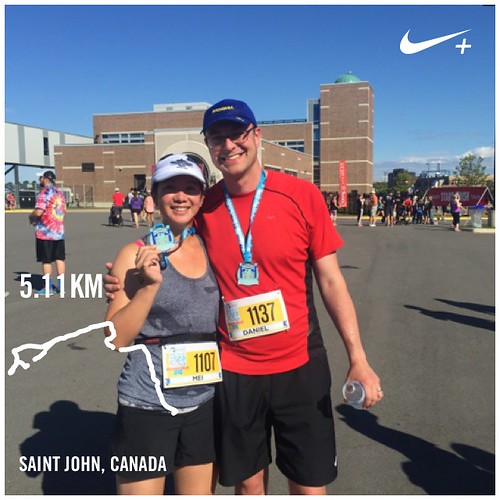 Dan and I with our second race medals of the weekend. 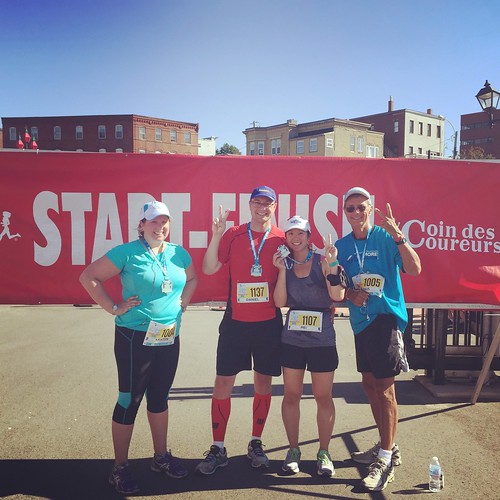 Kristen, Dan, me and Paul after finishing our second 5k that weekend.

We ended up getting lunch at North Market Seafood in the City Market. The day before Eddie had told us that the seafood platter was “dyno” so I decided to try it out. It consisted of fish and chips, scallops and shrimp and it was delicious. Nothing beats a good seafood platter. 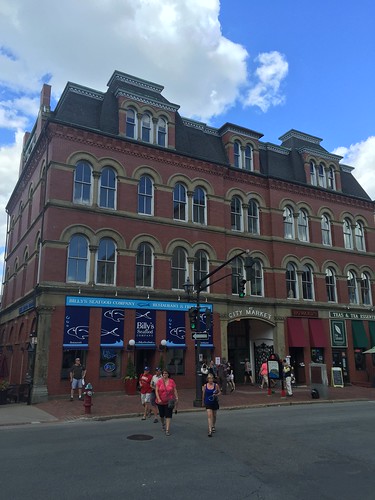 The City Market from the outside. Loved this place. 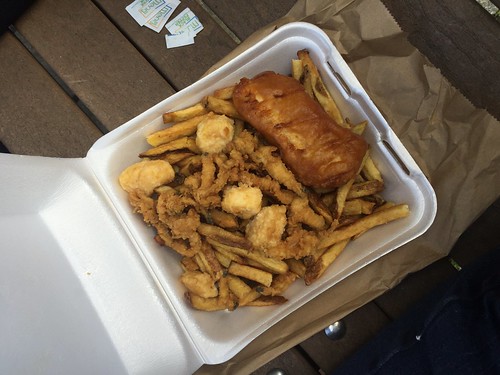 My seafood platter. It was lightly battered so it wasn’t too heavy and the fresh seafood was delicious!

In the afternoon Kristen, Paul, Sue, Dan and I hopped into Paul and Sue’s rental car for a road trip to Moncton, which is approximately 1.5 hours away. Our first stop once we got there was the famous Magnetic Hill. There wasn’t much of a line up and when we got there we were instructed to drive down to the bottom of the hill, put the car into neutral and then make sure to steer. The “magnets” would pull our car up the hill. We ended up going up the hill more than once! 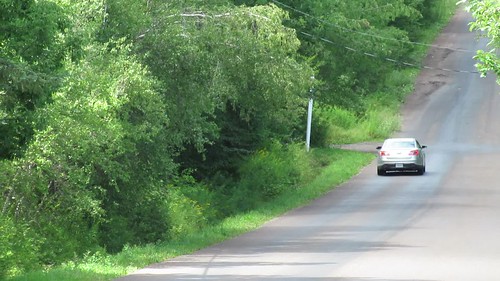 Paul took this video of us going up the Magnetic Hill.

Afterwards, we went into the Magnetic Hill gift shop area and found out the secret to the hill. It turns out it’s an optical illusion that makes it look like you’re going uphill but you’re really going downhill. Basically there aren’t any magnets pulling you up and it’s all from gravity. I had actually figured it out because there’s a “magnetic hill” in Caledon that I visited a few times in my twenties. When I told my dad about it he ruined the magic and explained that it was all gravity. I guess my dad was right. While we were in the gift shop I found some shwings for a really good price. I decided that I needed all the help I could get for the next day’s marathon (I had seen the elevation profile and it was pretty confidence shaking) so I bought them. 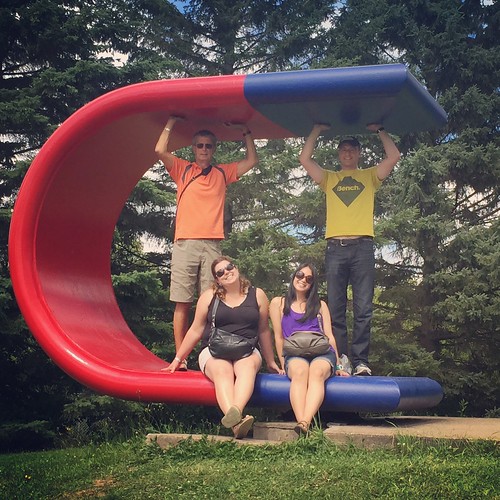 Paul, Dan, Kristen and I at the Magnetic Hill sign. 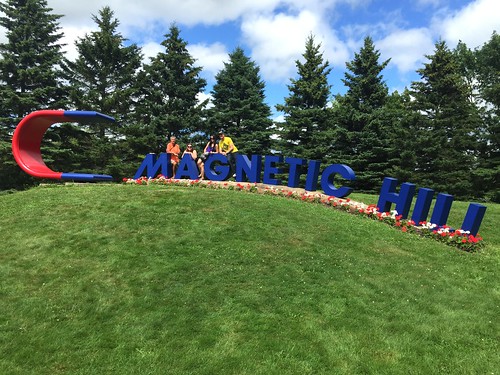 Another picture of us by the Magnetic Hill sign. 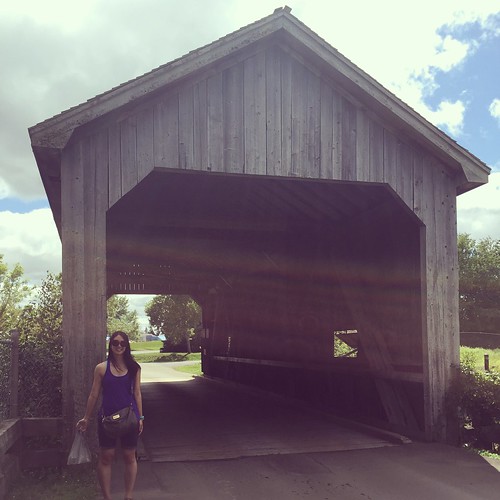 New Brunswick is known for their covered bridges so I had to take a picture with one. Someday I’ll come back and see more of them and visit their famous Hopewell Rocks! 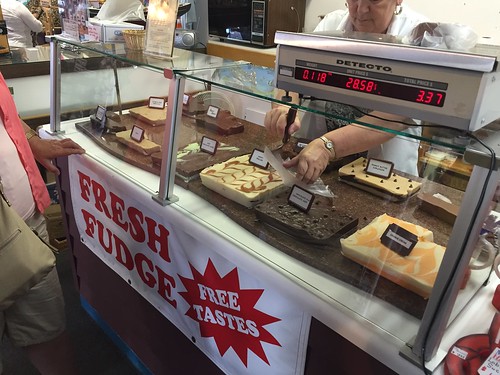 We also bought a pound of fudge. The fudge was delicious.

After our adventures at the hill we went to the casino in Moncton where they had an all-you-can-eat buffet, which included crab legs. The crab was good and at one point I felt eyes staring at me. I turned to see Kristen, Paul and Sue all watching me tear into my crab. Kristen said that they were watching my technique. My parents met at an all-you-can-eat crab buffet so maybe I inherited some of their skill? 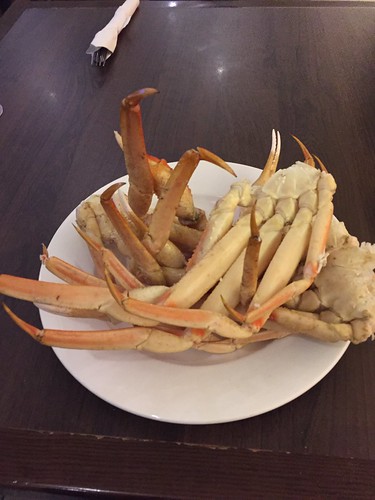 A small sampling of the crab legs that I ate.

When we were stuffed full of crab we piled back into the car and went back to Saint John where we stopped to see the reversing rapids. They recommend viewing the rapids at low tide and high tide, but we didn’t have enough time to see them more than once. 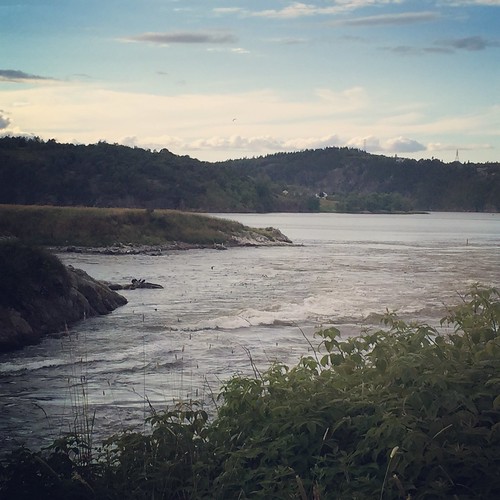 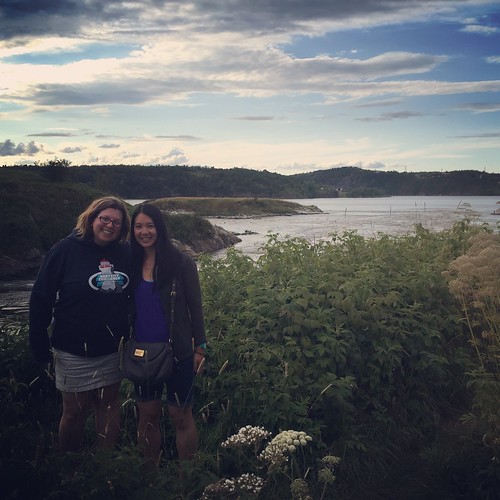 Kristen and I by the Reversing Rapids.

With our sightseeing finished for the day we went back to the Delta Brunswick Hotel where we met up with Anna, Eddie and Gianna at the Mix Resto Bar. Our waitress was really nice and let us sit in the restaurant and eat our fudge. We later also ordered what she described as the “best nachos in town.” 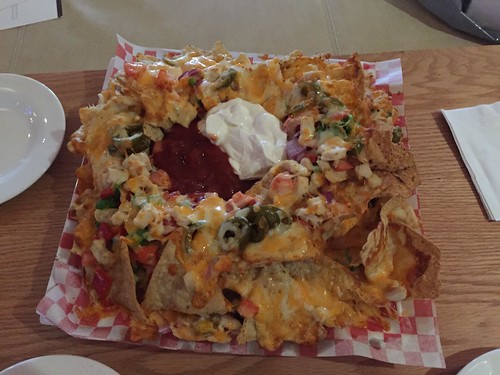 The “best nachos in town.” Also good fuel for a half marathon. Yum!

Nachos are also good fuel for half marathons. Stay tuned for the last race recap of our Port City Challenge.