After a three year hiatus, the “crush it” gang (as I affectionately call us) reunited at the Port City Challenge, Marathon by the Sea race weekend in Saint John, New Brunswick.

We had previously travelled to Disney World and Montreal with this group of friends where I ran my first and third half marathons respectively. It had been three years since we had all been together again. This time we were taking on the Port City Challenge, which meant running a 5k on Friday, 5k on Saturday and a 10k or half or full marathon on Sunday. Since I was marathon training at the time I opted to run the half marathon and use it as my long run while everybody else signed up for the 10k. 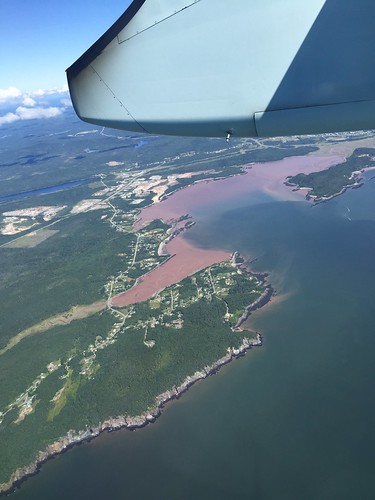 View from the plane as we arrived in Saint John.

Dan and I flew to Saint John on Friday morning and ran into Anna and Eddie at the airport. It turned out we were on the same flight! When we landed we shared a cab to the hotel. The airport in Saint John reminded me of a larger version of the airport in Sault Ste. Marie. The city was beautiful with architecture that reminded me of St. John’s, Newfoundland. We had a really interesting driver who told us about the history of Saint John as he drove us into town. He complained that it had been too hot and I tried not to laugh. It had been a ridiculously hot summer in Toronto and for the first time in a long time I felt comfortable. It was a beautiful day with a nice cool breeze from the water.

After checking in at the hotel we met up with Kristen, Paul and Sue and then went to explore Saint John. I loved walking along the waterfront. We also stopped for some drinks before heading out to pick up our race kits. Along the way, Anna’s friend Gianna also arrived. She was running the race too. 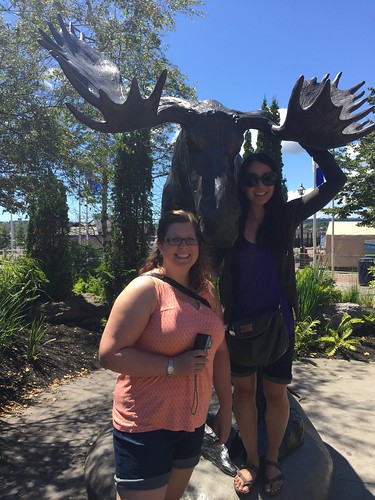 Kristen and I with the Moosehead moose. Later Paul also took a “moose selfie.” Popular moose! 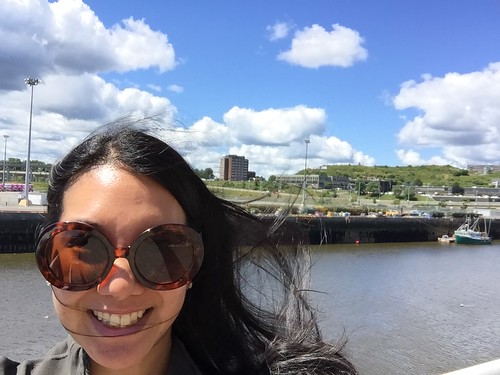 Me on the boardwalk. It’s hard to see but in the background is a Hollywood style “Saint John” sign. I was thrilled when I got to run past it during the half on Sunday. 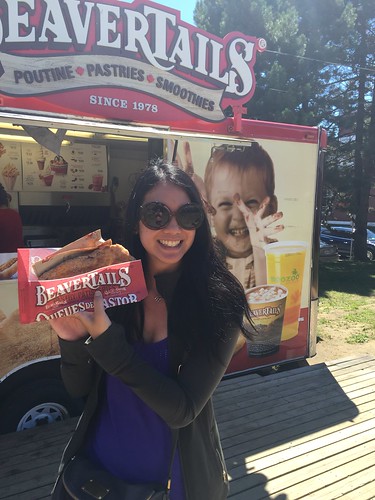 I love Beavertails. They’re always a good idea! Cinnamon sugar and lemon is my favourite. 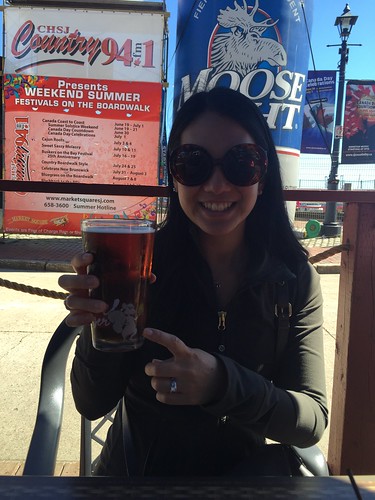 The best thing about night races is that you can drink during the day. I had a Barking Squirrel lager.

As I expected, the expo was small but very well organized. What I liked about the expo was how friendly the volunteers were. Port City Challenge participants received a special hoody. I had ordered a small and when I went to pick it up the volunteer told me that the hoodies ran big and got me an extra small instead. She said if it didn’t work out I could exchange it. It ended up fitting perfectly! I really appreciated that.

Opening my race kit reminded me of Christmas morning. I couldn’t believe how much useful gear we got. 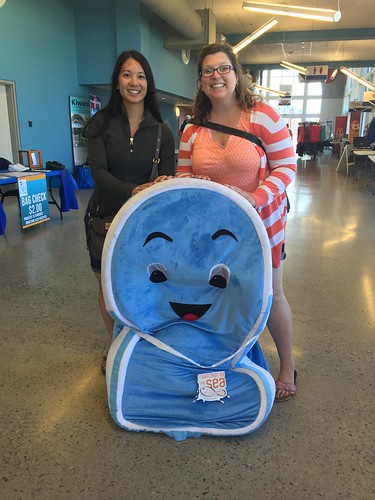 Kristen and I with the Marathon by the Sea mascot. It’s a shoe. 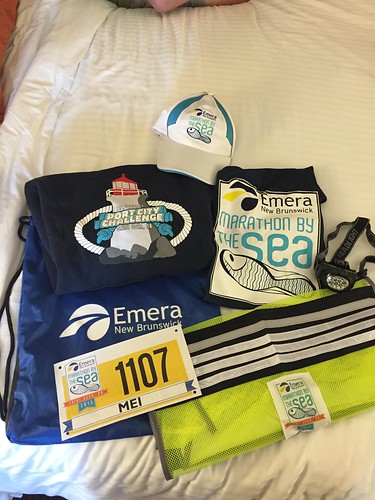 The contents of my race kit. I got a running hat, Port City Challenge hoody, Marathon by the Sea tech tee, head lamp and a reflective vest.

The first 5k race was at night so we went for a pre-race dinner at Steamers Lobster Company. For $63 Dan and I shared the set dinner for two. I couldn’t believe the value. It included two cups of homemade chowder, a bucket of steaming mussels and clams, two 1.25 lb lobsters and two corn on the cobs. It was so good. You can’t beat fresh seafood and especially at that price! Dan also had dessert. Dan ate so much that Gianna thought he wasn’t running. When he said he was she just kept saying “Good for you!” 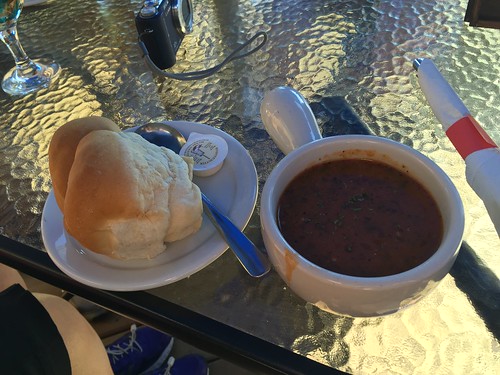 My soup. The buns were also good. 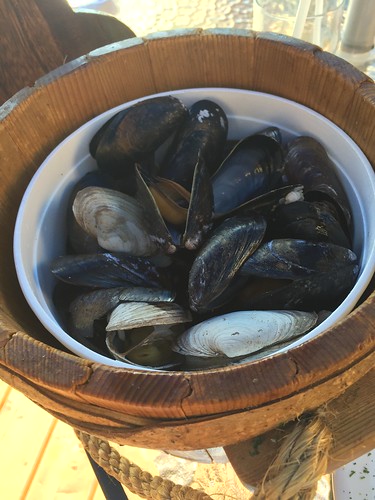 Our bucket of mussels and clams. There was so much that we couldn’t eat it all. 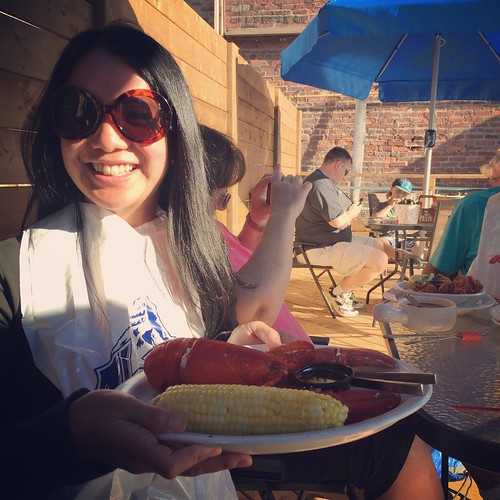 Holding my lobster dinner and corn on the cob. Yum. 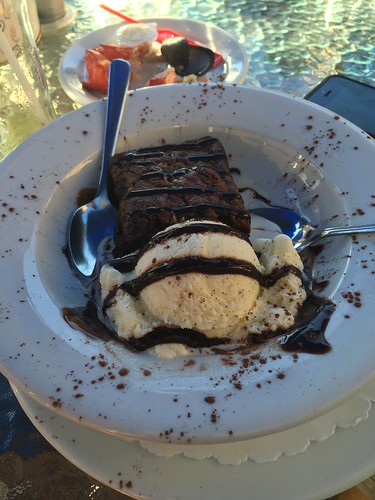 Dan’s dessert. You never would have guessed that he was going to run a race in an hour.

After dinner, we got changed and ready for the race. 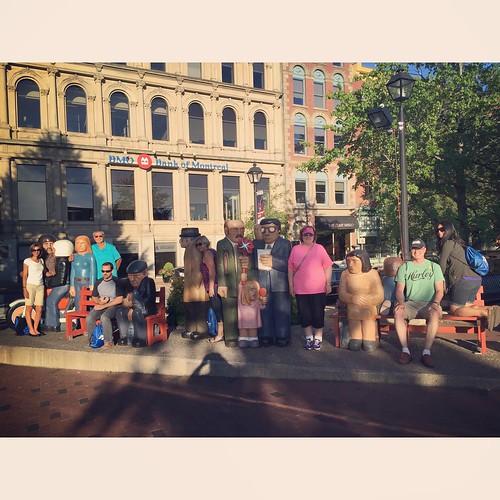 On our way back to the hotel we had to stop and take this hilarious picture. 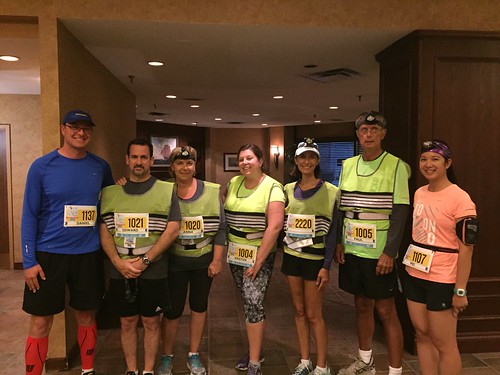 Team “Crush It!” before heading off to the race.

They handed out glowstick bracelets and necklaces at the race start. Everybody looked like miners with their lights on and it was really exciting. There were also runners in costume and the atmosphere was very festive. We all wished each other a good race and before we knew it we were off.

I loved this bride and maid of honour’s race outfits. If I had been a runner when I got married I would have done something like this leading up to my wedding. I’m sure my wedding party is happy I wasn’t a runner yet. lol. Photo by Al Gagnon.

One thing that I had trouble with was all of the walkers I had to get around in the beginning. Because it was a smaller race there weren’t any corrals and as usual, I lined up too far in the back. It was fun though to see everybody out. The race course was mainly flat with a few very small bumps and dips. It took us by the harbour and all of the bars and pubs on the boardwalk. We ran past the boardwalk and onto a path that took us under an overpass. There was a small loop and then we circled back around and headed back. It was dark in sections of it so I turned my headlamp on to make sure I didn’t lose my footing. Dan and Gianna took off ahead of me. When I was heading back the fireworks started and I slowed down to watch them. They were spectacular and it was amazing to be running along the water and seeing the fireworks going off. This was definitely one of my nicest race experiences ever. I ended up finishing in 26:50. I didn’t realize it at the time but it was a new 5k race PB, which I was really happy with considering I had slowed down to watch the fireworks.

A photographer took pictures of the fireworks. Photo courtesy of Nicholas Lowe Photography.

Another photo by Nicholas Lowe Photographer. I was so happy that he took these and shared them on his Facebook page. 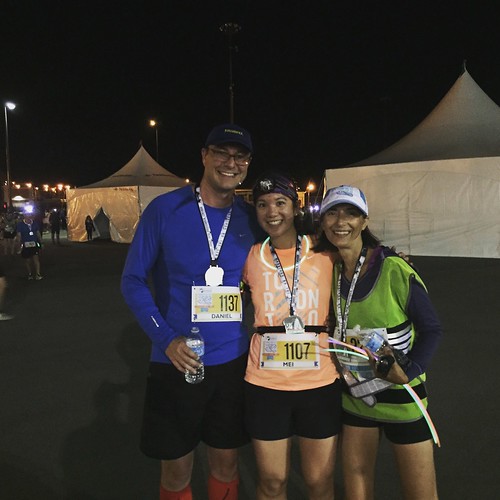 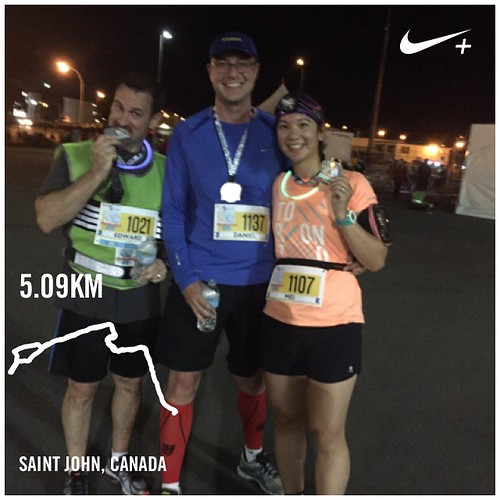 Eddie, Dan and I after the race. 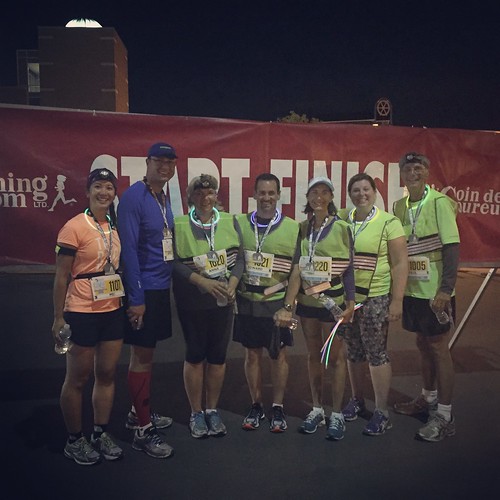 Crushed it! Everybody was amazing!

Dan, Gianna and I met up at the finish, drank some chocolate milk and waited for the others. Anna ran a PB as well and everybody was excited. We all loved the relaxed atmosphere of the race and the beautiful fireworks. It was a lot of fun and set the tone for the rest of the weekend. We were off to a great start in Saint John! One race down, two more to go!