I decided to wear a tutu for my third half marathon. It was one of the best decisions of my life. More on that in a bit.

Ready to run! I opted not to wear my fuel belt. Instead I attached my camera to my bib belt. Not a good idea. I spent the whole race pulling my bib belt around (it kept moving because of the heavier camera bag).

I had a quick breakfast (a bagel) at Second Cup on the morning of the Montreal Rock n’ Roll Half Marathon. We made our way to the metro, and through some crazy co-ordination, got in touch with everybody else and found out that they were all on the first car. For once we actually all made it in the same metro car with no problem and very little confusion. The mood this time was sombre. Everybody had been so confident before the Disney World half, but this time there was more nervousness. Most of us felt like we hadn’t trained enough and I was still tired from running my previous half three weeks before.

Since the race was starting on Jacques-Cartier Bridge we had to take the metro to Parc Jean-Drapeau. As more and more runners crowded into the station we became increasingly crammed. Anna, who is a little claustrophobic, opted to leave with Eddie and take a cab to the bridge. We were worried that she wouldn’t make it, but again things seemed to be working out for us that day and we managed to find her at the starting line! 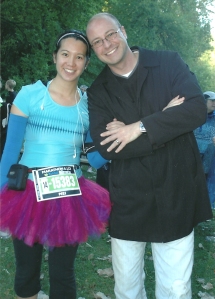 Dan and I before the Montreal half. We were actually in line for the porta potties.

After saying goodbye to Dan, Kristen and I made our way to Jacques-Cartier Bridge where thousands of runners were lining up. Because the start was on the bridge it was freezing! Being late September in Montreal dressed in running clothes and not moving also didn’t help. We found our corral and huddled close together for warmth.

In our corral. We were huddling together to stay warm.

Kristen and I in our corral. Trying to stay warm.

We could see runners from the faster corrals from our starting place on the bridge. Later we would be running there too.

Moving up and getting closer to the start. I took this picture in our corral.

As we moved closer and closer to the start line we realized that we were in the wrong corral. Oh well, this happens probably 9 out of 10 times when I run. Soon it was time to go and we did a quick countdown in French (trois! deux! un!) and we were off!

During the first kilometre we saw Dan who had stayed close to the metro station to cheer for us. I yelled “Dan! We started in the wrong corral again!” and he just laughed. We made our way through Parc Jean Drapeau and past the Montreal Biosphere. I didn’t know the name of it and later when I was describing it to my friend Shannon (who was living in Montreal at the time) I referred to it as “the ball.” Thanks to my stellar description it took a while for her to clue in and figure out what I was talking about.

Kristen and I ran past the Montreal Biosphere.

We eventually also caught up to Paul and took some pictures with him.

We snapped this quick picture of Kristen and Paul.

Later Paul caught up with us and photobombed me.

Paul photobombed me. It was awesome.

Eventually we said our goodbyes again and continued to run our own races. The route took us across the Pont de la Concorde where we had a beautiful view of part of the Montreal skyline. That’s one of the things that I love about running, it’s such a great way to see a city from a different perspective.

View as we crossed the bridge.

At this point, Kristen and I were having lots of fun so we snapped some pictures of each other running. The other runners were more serious than us (and much faster) so I think some people were annoyed.

I love my tutu.

I was starting to feel sore a lot earlier than usual so we kept having to stop and stretch. There were a few people out and when they saw my tutu they cheered “Yay belle ballerina! Yay tutu!” I loved it. Kristen said that she’s getting a tutu next time.

We stopped for a bathroom break and Kristen said I found us the cleanest porta pottie ever. I think we were the first to use it. While I was waiting for Kristen I saw Paul run by. He looked good and we never caught up with him again. He was like greased lightning!

This is where I saw Paul run by.

The rest of the race was painful. My legs kept cramping and I felt tired. Since we didn’t run all of Disney World together we decided to stick this one out together and enjoy the scenery. We ran through Old Montreal, which was really beautiful and also meant we were getting closer to the finish. A woman ran past us and said that it was really difficult for her because we were running past her apartment and she just wanted to go home. I know how she feels now.

Kristen and I smiling through the pain.

At 19k in we were greeted by a massive hill.

Me running. Dan always gets mad that I take such good race photos. I told him that the price he pays for being fast is poor race photos. lol

We crossed together and I was so happy it was over. I couldn’t believe that we did it (again!).

We did it! Kristen and I with our medals.

We made our way through the finishing shoot and met up with Paul and Dan and waited for everybody else. Kristen and I saw somebody who had just completed the marathon hobbling around. It looked painful. They were probably very fast if they were finished around the same time as us (the marathon and half marathon started together)!

Kristen and Paul toast to running a good half.

Dan and I after the half.

Happy Birthday Dan! I dedicated my medal to him.

After the race all I wanted to do was get poutine. So after we all met up we headed over to the nearest metro station and made our way back to Old Montreal. I hadn’t been thinking that morning and forgot to give Dan a bag with my coat and everything in it so I was starting to get pretty cold.

At last we made it to Montreal Poutine and it was delicious. Poutine after running a half marathon is definitely one of the best things ever.

When we were done we said goodbye to everybody and headed back to our hotel. Dan and I found that our keys had been deactivated when we tried to get back into our room. We had asked for late checkout so figured it was just an error. We ran back downstairs and talked to the front desk. Dan said “The whole plane would really appreciate it if my wife could shower before getting on.” It was no problem at all and they fixed our keys and we were good to go.

In all, we had a great trip to Montreal. It was wonderful to see everybody and to run another half with Kristen.

Last look at the medal. Later the poorly sewn ribbon broke so I had to pin it back together. Oh well. I still looks pretty.