I reached a very important running milestone in May when I ran my tenth half marathon! As I was getting ready to run the Goodlife Fitness Toronto Half Marathon, I reflected on my first nine halfs. Even though my training hadn’t been as diligent in the weeks leading up to Goodlife, I still had high hopes for this half and set a very ambitious goal. I wanted to run a sub-2 hour half marathon. 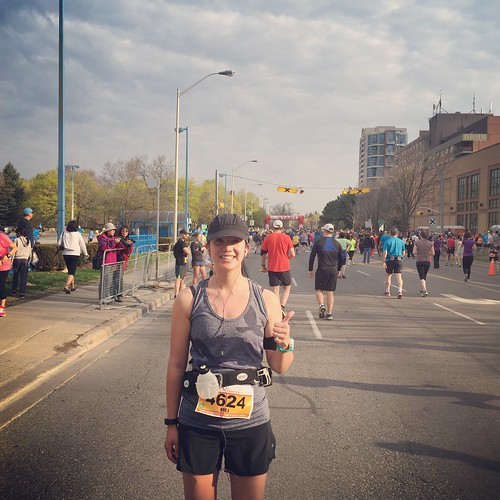 Me before the race. I had dreams of a sub-2 hour half.

I had run some very strong races in 2015 on hilly terrain and the Goodlife half marathon boasts a net downhill course. The words “downhill” appealed to me, though I should have paid more attention to the “net” part of that. More on that in a bit.

I picked up my race kit at the expo the day before the race. The expo was smaller and a little underwhelming. The race kit didn’t have much and included the race bib, a t-shirt, a free t-shirt from one of the previous race years and that’s it! Not even a bag! I guess I’ve been spoiled by other bigger races, such as Scotiabank Toronto Waterfront Marathon. 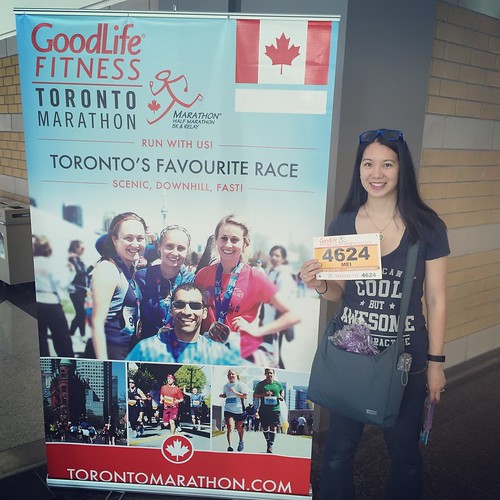 With my race bib at the expo. 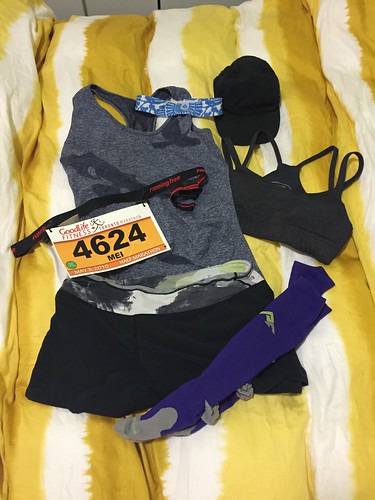 The next day I met up with Jane, whose husband very kindly drove us to the start line. The race starts up at Mel Lastman Square in North York and ends by Ontario Place. We arrived with plenty of time to warm up, check our bags and use the washrooms. At first we thought we were lucky to have access to the washrooms inside the municipal building located in the square, but the line ups were extremely long. We decided to try our luck at the porta potties and fortunately for us, the line up there was short when we got in line and then started to get long when we were leaving.

There aren’t any formal corrals for this race so we found a spot and lined up. The full marathon started at 7:30 a.m. and the half didn’t start until 8:30 a.m. I think 8:30 starts are ok in the fall but maybe a little too late in the spring. It was already a comfortable temperature when we started and I knew that it was only going to get hotter.

When the race started Jane and I wished each other luck and then took off. I could see her for a few kilometres and tried to keep her in my line of vision until she was gone again. She’s so fast! There were a few things that were my undoing that day. The first was hills. Things were going ok for the first part of the race and then we hit the famous Hogg’s Hollow Hill at about 3km in. I usually excel at running hills but in my overzealousness to run a sub-2 hour half I attacked the hill a little too hard. I distinctly remember being partway up and thinking “I’m still on this hill? When will it end?” After this hill I was tired for the rest of my race. Rookie mistake.

The race is advertised as fast, downhill and scenic. I quickly found out that “net downhill” means that the finish line is at a lower elevation than the start line, and even though there were a lot of downhill sections, I never felt like I gained any speed there because of all of the up hill sections that balanced it out.

The next thing that was my undoing was the heat. At about 10k in I checked my watch and was pleased to still be on track to finish in about a 1:55 time. That would give me some buffer if I got tired in the second half. The temperature continued to rise and by 9:30 a.m. it was already 16 C. I was already over heated and could feel the heat rising off of the street. I get overheated easily and hadn’t planned for it to be this hot this soon. I had only brought one bottle of water and one bottle of eload in my fuel belt (on hotter days I usually bring two of each). I felt tired and knew the second half of the race would be a challenge.

Another thing that was my undoing was improper fuelling. I ripped open a gel and stuck it in my mouth but nothing came out. I looked at it and had somehow ripped it in the wrong spot! Because I had put it in my mouth it was slimy from my spit so I couldn’t open it. I know that sounds gross. So I put it back in my pouch, cursing it the whole time. It’s kind of funny to think about now. At the time I had run nine half marathons, three 30k races and one full marathon and had never had an issue opening a gel during race day before. I guess there’s a first time for anything!

By the time we were headed down Rosedale Valley at about 12kms in I was done. I started to take walking breaks, which is something that I rarely do during races. I was so tired and just wanted it to be over.

At close to 16 or 17kms in I was running past my condo and desperately wanted to go inside, take a break in the air conditioning and eat a popsicle. I was ready to do it but then I saw Jose and Ginny from the Running Room, who cheered for me. I knew I couldn’t run into my condo with them watching me so I kept going! At this point you can probably guess that my A goal of finishing in sub-2 had gone completely out the window. I concentrated on my B goal, which was to finish in 2:11:57 (my latest PB) or faster. 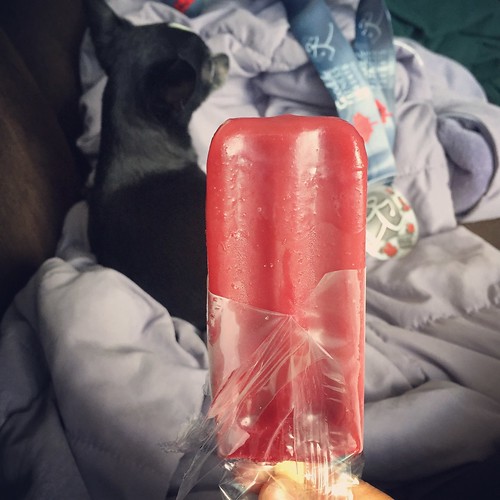 This is all I could think about when I ran past my condo. I later got my popsicle and sat with my dog and my newly earned medal.

I ran out of water in my fuel belt and had to stop at a few water stations. Unfortunately I felt like the water they gave me just wasn’t enough. I was so thirsty but kept going. Quite a few pace bunnies passed me for good but at this point I didn’t really care. I found it mentally challenging to run past Fort York, which is the finish of the Yonge St. 10k. I kept reminding myself that I just had to hang on for a few more kilometres. With less than a kilometre to go the 2:10 pace bunny ran past me, but I knew I might still be able to squeak in and meet my B goal. Feeling determined and knowing that I was close to the end, I hung on and finished in 2:11 on the dot. Strangely enough I was completely ecstatic with this finishing time! It hadn’t been the race that I had hoped for, but I still managed to PB and meet my B goal by 57 seconds! I couldn’t stop smiling. After finishing I found Jane, who ran the same time that she had run at the Chilly half. We grabbed some water, picked up our bags and then walked up to the streetcar together. 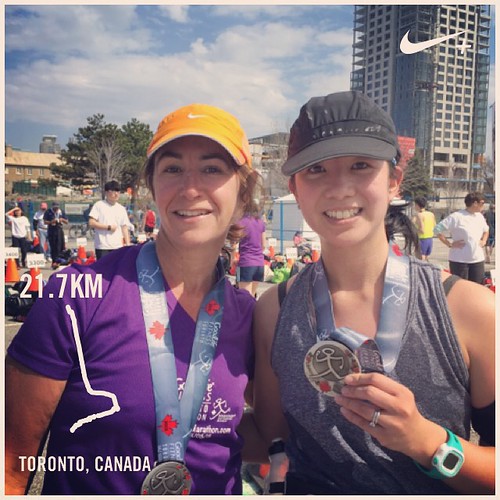 Jane and I after the race. You can see the sweat marks on my hat. That’s how hot I got!

This race had been tough for me and hadn’t gone according to plan, but I was still happy with the result. I’m glad that I stuck with it and did the best I could. I’ll also pay more attention to “net downhill” races from now on!

One thought on “The meaning of “net downhill” – Goodlife Fitness Toronto Half Marathon, 2015, Race Recap”