Last week, I ran the Toronto Yonge St 10k for the third year in a row (fourth time running this course if you count The Sporting Life 10k from 2012). The race weekend started off with picking up my race kit from the mini expo. As always, kit pick up was quick and efficient. We didn’t spend much time at the mini expo because we had an appointment that we had to get to. 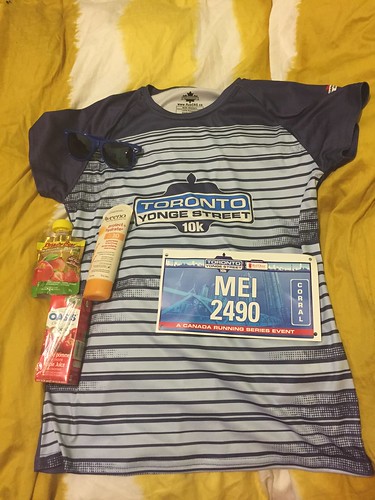 My Toronto Yonge St. 10k race kit included an awesome tech tee, sunglasses, sunscreen, powerbar sample and a juice box. I learned about t-shirt sizing from last year and made sure to get a women’s medium shirt for all of my Canada Running Series races. (I have a long torso and broader shoulders so my women’s small shirts from last year were a little too tight and short. I ended up donating them.)

As I wandered through the Running Room booth, one of their staff members tried to get me to spin a wheel to win a prize. I usually go for things like this since I love winning prizes. This time I was completely distracted because the Canadian women’s marathon record holder was there. Not only was Lanni Marchant there but she was packing her stuff up and getting ready to leave. I felt bad interrupting her on her way out but Dan, who was equally excited, stopped her and asked if we could take a quick picture. She was so nice and she agreed. We took a quick picture and I wished her luck on the race and she said “Thank you. Good luck on your race too.” That made my day. I said to Dan “Lanni Marchant wished me luck on my race! I’m going to run a PB.” 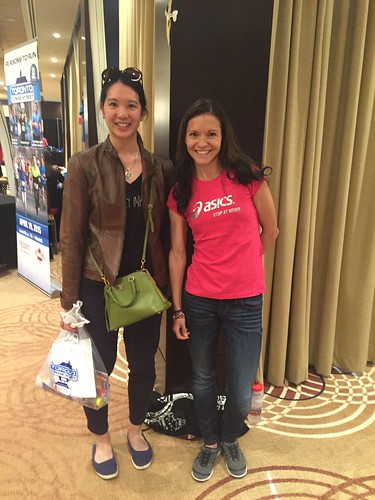 I was thrilled to meet Lanni Marchant as she was leaving the mini expo.

Dan dropped me off at the race start the next day. The race starts at Yonge and Castlefield, which is also our old neighbourhood. I still love visiting this area and find it comforting in its familiarity. As is my tradition, I took a selfie with the start line. 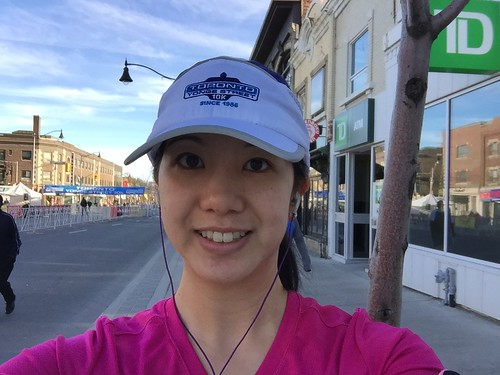 My yearly race day selfie with the start line. I stole the Toronto Yonge St. 10k hat from Dan, who got it in his race kit last year. He ended up not running the race due to injury and had never worn the hat so I figured it was up for grabs.

It was cold and windy that morning and as I made my way up to bag check I saw runners huddled inside of bus shelters, doorways and within the glass doors of ATM locations. A lot of people were wearing jackets and I wondered if I was underdressed. I checked my bag right away anyway, thinking that it was similar to ripping a band-aid off quickly. After checking my bag I stood in a sunny spot and that’s when I saw Jane and Nanlee from the Running Room. With over 7,000 people running this race it was amazing to me that we found each other. We stood together chatting and also made one last stop at the porta-potties (in line we ran into a Running Room manager that we knew! Again what are the chances?). After Jane and Nanlee checked their bags we did a quick little warm up together before heading to our corrals.

This year I had seeded myself in the blue corral (one lower than the last two years). As we headed over some girls complimented me on my shirt. It said “Does this shirt make my butt look fast?”  I figured I could use all the help that I could get. I had yet to break an hour on this course, which was surprising because it was mainly downhill and known to be fast. I’ve broken an hour running other more challenging 10ks before. Also, every year I seem to get 20 seconds slower on this course. With a few PBs under my belt already in 2015, I was determined to get redemption and run a race with no regrets. As I waited in my corral I bounced around and danced by myself. I wanted to keep my limbs warmed up instead of letting myself cool back down (otherwise what was the point of my previous warm up?).

When we started I felt relaxed and excited and started to weave around people. As my garmin stats started coming in I couldn’t believe how fast I was flying down the course. Unlike Harry’s Spring Run-off I still felt good so I kept going. Running downhill definitely helps. There’s a small uphill section just past Davisville and I felt like I soared up it this year. I could see a girl up ahead who had been in my corral so I used her as my pacer. Eventually I caught up to her and passed her. This is something that has been new for me this season!

I hit the 5k point in 26:12, a new PB for that distance. Last year I had hit this point in about 29 minutes so I was happy with the improvement. In between the 6th and 7th kilometre I saw two runners up ahead who looked like Brian and Kevin (aka Sexy Chad). I thought there was no way that out of 7,000 runners I’d see them on the course. They stopped for water and Gatorade and as I ran by I knew it was them. I shouted to Kevin and we said hi before I continued on.

I saw a flash out of the corner of my eye as I ran past this aid station. Later on I saw this picture on Facebook and realized that it was a camera! You can see me running by in the top right corner.
Photo courtesy: Canada Running Series Facebook page

One of the challenges on the course this year was the crazy wind. It was so windy that it felt like I was running through a wind tunnel and sometimes I couldn’t breathe. When I turned onto Richmond Street at the 7k point I was hit by another gust of wind. I felt like like I was going to get blown away. The last 3k of the course are always challenging for me because the race course flattens out. It takes some adjustment and I always lose speed here. I tried to stay strong and keep running. At the 9k point when I was getting tired I tried to continue to look strong. My run clinic instructor Tim had told me that he was a course marshall at the race and would be stationed at about this point. I kept thinking that if I saw him (or if he saw me) that I wanted to look strong. It’s funny how your brain works when you’re racing and what you do when you think you’re being watched. I didn’t see him but I was getting close to the finish line and started to kick it up a gear. When I saw the finish line ahead I started to full out sprint. Some people sprinted past me and in my head I decided that they didn’t run hard enough on the course (or else how would they have enough gas left in the tank to sprint like that?). I tend to get a little delusional at races.

I crossed the finish line in 53:17. It was a new course and 10k PB for me (last year I finished in 1:00:43 and my 10k PB was 57 minutes). I was exhausted but proud of my new achievement. As I was going through the finishing chute I saw Jane with her medal around her neck and eating a banana. I couldn’t believe that we ran into each other again! We congratulated each other on our races and talked for a bit before I went to get my medal and some food. She said that she was meeting Nanlee at bag pick up so I said I would head over there afterwards. While I was in line for food I looked across at the other line and saw Brian and Kevin! We waved at each other and when we all picked up our food we met up to recap the race. I was so happy to see them and get the chance to talk and eat cookies together (they made fun of me because I had three cookies. Some of them stuck together when I tried to pick them up so I just took them). 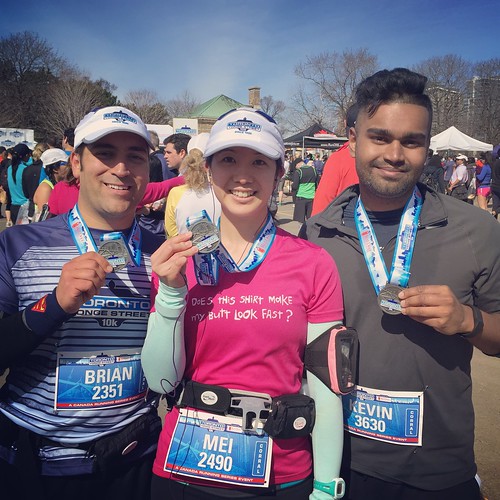 Brian, Mei and Kevin with their medals. Can’t wait to catch up with them again at another race!

Kevin and Brian’s next race is the Goodlife Toronto Marathon. I’m running the half so we talked about seeing each other on the course then. I just found out that the half starts an hour after the full, so I doubt I’ll see them. It’ll still be good knowing that I’m running in their footsteps though!

After catching up I decided to try to get out of the finish area so I could meet up with Dan. I wandered around for a bit trying to figure out how to get lost. The race ends in Fort York and for some reason I always get disoriented there. It’s hard for me to figure out how to get out and what direction I’m facing. AS I was wandering around looking confused I ran into Mitch from the Running Room. Again, I couldn’t believe my luck! We both congratulated each other on our races and then I headed out. On my way out I bumped into Tim, who was still doing course marshalling as the final fitness walkers came in. I was able to catch up with him a little bit before heading off. 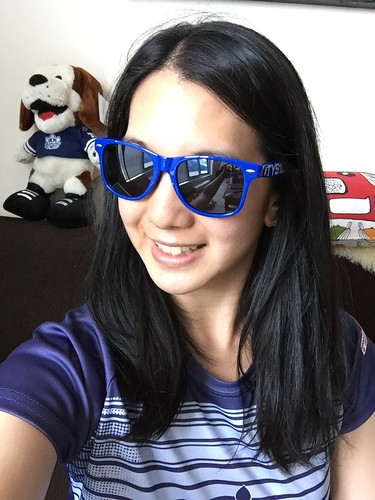 Overall, it was a great race and I was very proud of my result. Once again, my months of winter training is paying off. I also love the running community. Even though I was technically running this race on my own, with no real plans to meet up with anyone etc., I still ran into seven familiar faces in a sea of thousands. Just seeing everyone was enough to lift my spirits and give me an extra boost. I love this race and will definitely run it again next year. If it’s not windy next year, maybe I can even aim for a 52 minute finish! 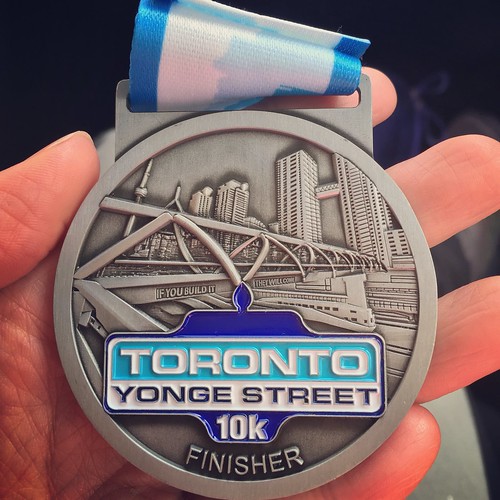 My #TYS10k medal. I love that this iconic bridge that we run past is on the medal. Every year, Canada Running Series puts a hidden message in the Yonge St. 10k medal. This year’s message is “If you build it, they will come.”