With three weeks to go until marathon day, I’ve been feeling a mix of excitement and nervousness. When I decided to train for this marathon I thought I would feel more confident, since I’ve run one before and know that I can finish. As of a few weeks ago I was still feeling nervous, but my confidence has grown thanks to an amazing long run last week. 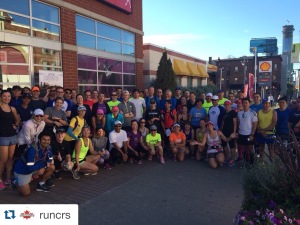 Group picture at the tune-up run. I thought everybody was waving their hands around but it turns out it was just me! Photo courtesy of Canada Running Series.

STWM hosted their last tune-up run before the race (I ran their first tune-up run in June). With some of the race’s pace bunnies participating and a 23k route that covered part of the marathon route, I decided to switch it up and go to this run instead of my usual weekly long run with The Beaches Running Room. The tune-up run was held at 8:30 a.m. at the Rosedale Running Room and since subways don’t run until 9 a.m. on Sundays I decided to run there.

It was 11 C when I left but it looked like it was going up to 16 C later that morning. I get very hot when I run so I opted to run to Rosedale in shorts, my singlet (I was trying to get one last long run in with this singlet this season), compression socks and arm warmers. I brought my running backpack with me with a change of dry clothes and a pair of regular running socks in case I needed to change later. I thought that the Rosedale Running Room was less than 5k away, but I was a little off (it was 5.2k). That was ok though because I was supposed to run 29k that day, and having only run 13k the week before I couldn’t skip it. 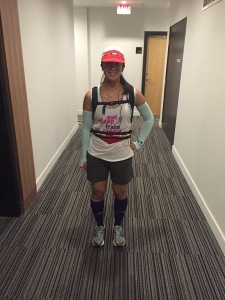 By the time I arrived I was sweating like crazy. I said hello to fellow digital champion Allison and then pulled off my arm warmers and compression socks, leaving what I called a “trail of destruction” behind me. I stashed my backpack at the store and then we prepared for the run. While we were waiting a runner dressed in long running tights and a long sleeve tech tee asked Allison if she thought she would be ok in just one layer or if she should layer on more. Allison assured her that she didn’t need more while I silently laughed to myself since I was sweating like crazy in shorts and a singlet. I know that everybody is different and I always find it interesting how some people hardly sweat while I basically start sweating the minute I tie my shoelace. 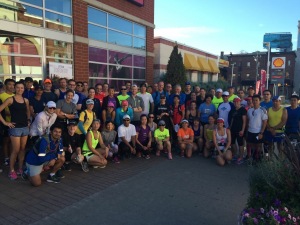 We took a group picture and then went through the route before everybody started running. The 3:15, 3:30, 3:45 and 4:40 marathon pace bunnies were there so it was an opportunity to run with your race day bunny. Out of curiosity I checked to see what pace the 3:45 bunny would be running and then laughed and decided to run with the 4:40 bunny.

Our 4:40 bunny was the incredible Lisa. She was very friendly and experienced and had a Boston Marathon tattoo on her calf, which I really admired. She also let us know that she finished her first marathon in over five hours, so it was inspiring to know that she has since qualified and run Boston. I’m still a long way off from my qualifying time (pretty much nearly impossible) but it’s nice to dream! Our group included fellow digital champions Allison and Karyn (this was my first time meeting Karyn in person so that was cool!) and another runner named Richard. It was a good group and we ran at a pace that was faster than my usual long run pace. It actually felt closer to my half marathon pace! For the most part I felt good and only got tired toward the end. Despite the pace, the run felt relaxed with  good company.  Lisa pointed out when we were on the stretch leading to the race finish line and I started to picture it on race day and get excited. Then a few kilometres later she pointed out that we were at the starting line. When we got back to the Running Room we realized that we had missed a turn and were a little short so we ran another loop. We ended up running about 23.6k. Lisa was an excellent pacer and I’ve decided to look out for her on race day. Karyn and I both accidentally ran a new half marathon distance PB on the training run! My Nike app let me know afterwards (my last half PB was set at Around the Bay during the 30k race so I was in disbelief that I just beat it!). That was a happy accident and a good boost to my confidence. It also explained why I felt tired. 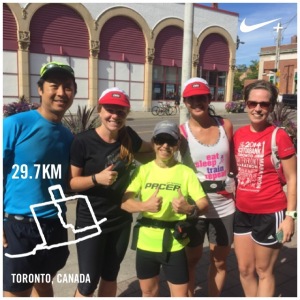 Our awesome group! Richard, Allison, Lisa, me and Karyn. The distance in this picture includes the 5k that I ran to get to the store. 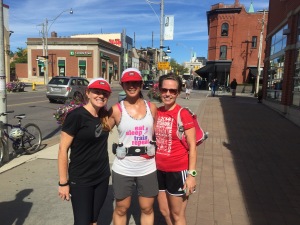 I had a great time running with fellow digital champs Allison and Karyn.

Having run about 29k I was originally planning on taking the subway home. Unfortunately there was a problem with the subway and they were sending shuttle buses instead. I decided that it would be faster and more convenient to run home (it totally was!). When I got home I felt tired but good. For the first time in my training I felt like I was ready for the marathon. I think I can. I think I can. Let’s hope this feeling lasts. 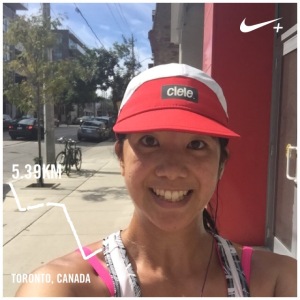 A week before the tune-up run I also joined Canada Running Series for a free run with an announcement; Lanni Marchant (who set the Canadian women’s marathon record at STWM in 2013) was returning to Scotia and aiming to qualify for the Rio 2016 Olympics! Lanni was at the run and we got to run with her! (By run with her I mean she was ahead of the group and I could see her and I was running in the group). It was exciting! 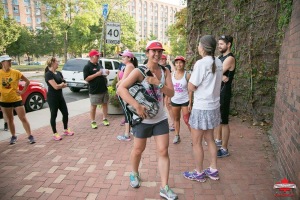 Me arriving at the run. I took the TTC partway and ran the rest of the way. Photo courtesy of Canada Running Series. 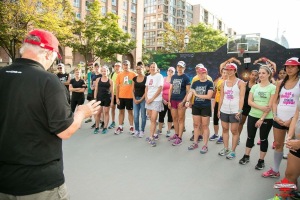 Race Director Alan Brooks talked to us about Lanni and the race and got us all excited. Photo courtesy of Canada Running Series. 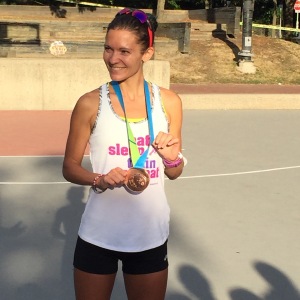 Lanni Marchant and her bronze Pan Am Games medal. 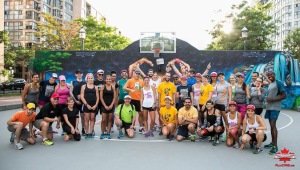 We ran to the Toronto sign in Nathan Phillips Square, which was an interesting feat during rush hour. When we got there we posed for some pictures. We were a little lacklustre and a tourist in Jays clothes started pumping us up and telling us how much he loved our city. That was nice to hear. 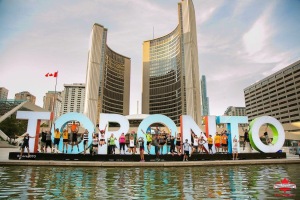 We jumped at the Toronto sign! Photo courtesy of Canada Running Series.

With our pictures done we ran back where they had freezies and water waiting for us. We also got to hold Lanni Marchant’s bronze Pan Am Games medal for the 10,000 metres race. It was actually pretty heavy! After that we took some pictures with Lanni and then I ran home. 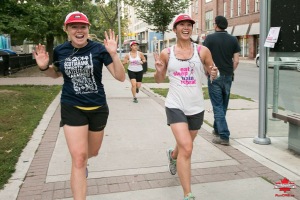 Allison and I looking really happy at the end of our run. lol. Photo courtesy of Canada Running Series. 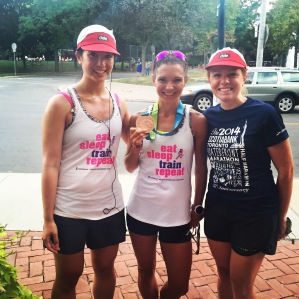 Allison and I with Lanni Marchant and her bronze Pan Am Medal.

I’ve been feeling excited after these two training runs. I’ve had many challenging training runs this season, especially due to the heat. There have been many runs where I’ve wondered what I was doing as I desperately tried to get from water fountain to water fountain. Even on Sunday (a week after this wonderful long run) I was scared to take off my shoe and see what my toe nail looked like afterwards (it’s bad but not as bad as I thought!). It’s ok though because it’s all part of the process and I feel like every runner training for a marathon is in this together.

The last time I met Lanni I wished her luck on her race and she wished me luck too. I told Dan that I was going to run a PB at my race the next day (Yonge St. 10k) and I did. I hope there’s a marathon PB in my near future!