Less than a week after running Around the Bay I was pinning another race bib on. This was another race that I had a score to settle with. Last year, my goal was to finish in 50 minutes or less and I had missed by an entire minute (an eternity for a runner). This year I was ready to fulfill this goal.

I regrammed this collage from Canada Running Series’ Instagram account. You may recognize the girl in the middle right hand column. 😉 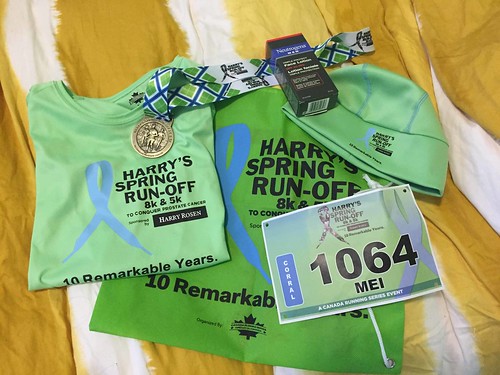 My race kit from Harry’s Spring Run-off. It was the 10 year anniversary of when Harry Rosen started sponsoring the race. This year’s kit included a nice race bag, t-shirt, and Neutrogena Men’s lotion (I gave the lotion to Dan). They gave out their signature beanie and medals after you completed the race. Not pictured are the Race Guide and Get Out There Magazine.

I’m not going to lie, getting ready on race morning was tough for me. I hadn’t slept well and was still tired from running Around the Bay. It had been warm all week (warm enough to run in a t-shirt) but of course the temperature plummeted on race day. It was hard to stay positive but I reminded myself how much nicer it was this year. In contrast to the snow last year it was sunny, beautiful and 2 C this year. 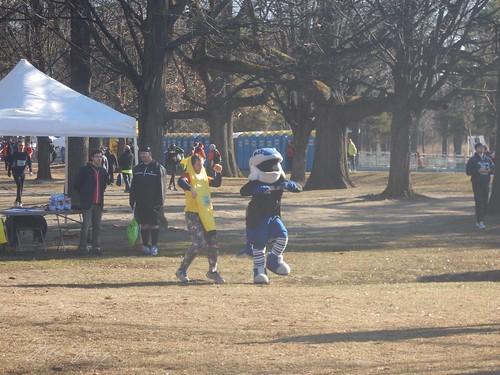 Their dancing cheered me up when we arrived at the race site. 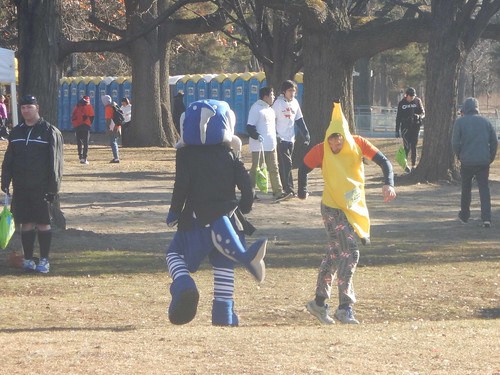 Dan and I arrived at High Park where the race took place with plenty of time to spare. As always, race day packet pick up was a breeze.I love this option since Harry’s Spring Run-off takes place on Easter weekend, so there’s no pick up the day before. Also, because the race takes place on Easter weekend it’s held on a Saturday, leaving Sunday to recover before going back to work. While we waited for the race to start I found a nice sunny spot to stand in to stay warm. They had a warm up by Jock Yoga that was really fun.

You can see me in the background doing my Jock Yoga warm up. Sauga from the Mississauga Steelheads was dressed in a suit and warmed up with us. Photo courtesy of Canada Running Series Facebook page.

Shortly after this the bag piper started to play and the runners for the 8k headed towards the corral. On the way, somebody saw my Around the Bay Race shirt and told me that they had run the race too. He asked how it went and I told him it went well. He told me that he and his girlfriend were both sick during the last 10k! It always amazes me what runners can run through. As I waited in the corral I noticed that the other runners around me were wearing more layers. I was wearing my long sleeved Around the Bay race shirt, a pair of running tights and a cap (not a toque). I kept reminding myself that I get overheated when I run and just tried to warm up so that I’d be ready when the race started.

When the race started I high fived Sauga, got too excited and took off. There seemed to be a pack of runners around me who were dodging and weaving to get around the “slower” runners. I joined them and momentarily thought that I had signed up for the wrong corral until my splits started coming in. I was running much faster than I realized and when we hit the first hill around the 3k mark I bonked. I felt exhausted but gritted my teeth and kept going. My running tights were also bugging me and I kept having to pull them up. I was really happy that I had opted to wear my other pair for Around the Bay! At the 4k mark there was an aid station so I took some time to walk and drink at the station so that I could regroup. 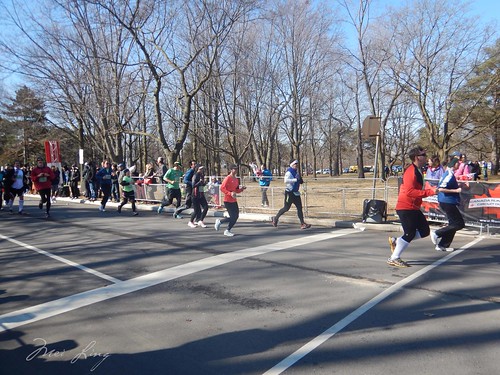 Dan took this picture of me hitting the 4k point.

While I was at the 4k mark, Eric Gillis was finishing and winning the race. You can hear the excitement in Dan’s voice in this video he shot of Eric Gillis making his way to the finish line.

Meanwhile, I still had 4k to go. I can tell you right now I didn’t look as smooth or fast as Eric Gillis when I eventually finished! Feeling slightly re-energized I kicked it up again and thought of my goal of finishing in 50 minutes or faster. I had banked enough time in the first few kilometres and knew that my brief walk wasn’t enough to get in the way of my goal. 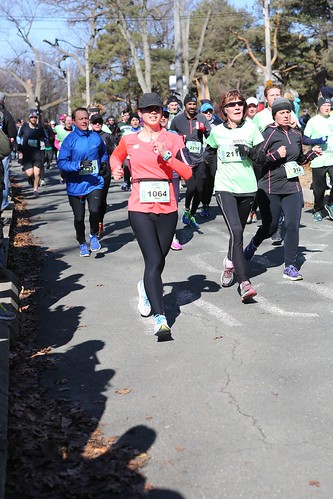 I was glad I didn’t wear a jacket. It was warming up! 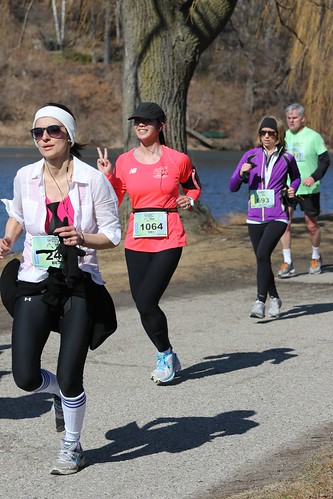 Running past Grenadier Pond. I knew that I was in good shape and just needed to hang on.

Tribe Fitness had a cheering station near the beginning of Spring Road Hill, so as I hit the hill they all started screaming words of encouragement. Even though I didn’t know any of them, I felt like a rock star and it was a good boost as I started up the hill. I think they need to have a cheering station there every year!

As I made my way up the hill there were volunteers cheering along the way. One woman was cheering 加油 (jia you) in Mandarin. It literally means “add gas” and it’s a phrase that means “Good luck” or “You can do it!” I called 谢谢 (xie xie) meaning “Thank you” to her and she lifted her hand up so I gave her a high five. It was an awesome moment. As I continued up the hill I kept repeating to myself “Just like Scarborough Road. Just like Scarborough Road.” As part of our training runs with the Running Room we run up and down 15 hills in the area, and one of the toughest hills is Scarborough Road. After what felt like an eternity I could see the top of the hill. Dan shot this video of me as I got to the top.

I love the excitement in his voice. As I approached the finish line they called my name. This always makes me so happy that I put my arms in the air. Feeling exhilarated that I had crushed my goal, I channelled my inner Meb Keflezighi and pumped my fist in the air. 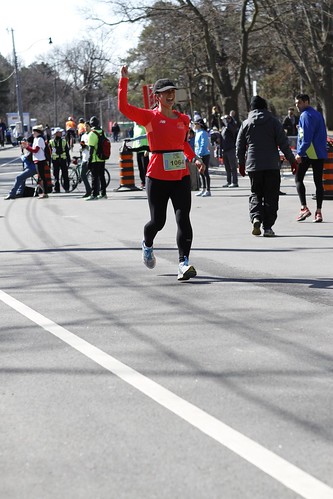 Channelling my inner Meb as I fist pumped at the end of my race.

Meb Keflezighi’s fist pump right before he won the Boston Marathon. I know that my 8k race is no Boston, but I was elated. Photo courtesy: Competitor.com

I crossed the finish line feeling strong and proud of running a new personal best time. 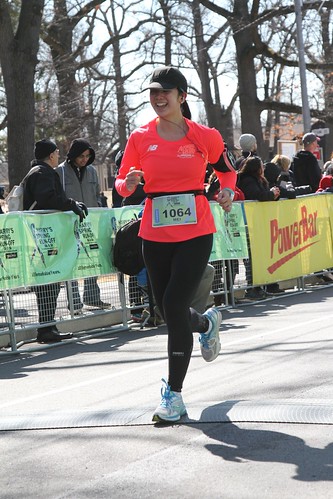 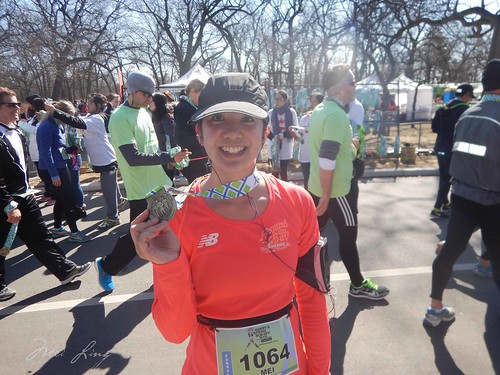 Showing off my medal.

Again I feel like my hard work over the winter has paid off. My year of personal bests continues.

I noticed after the fact that I posed the same way with my medal two years in a row. I guess it’s the type of medal that you just want to bite? lol. 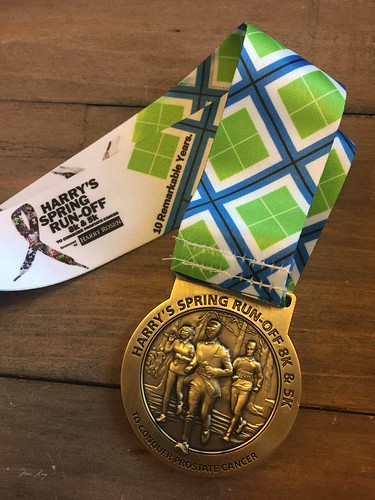 Picture of my medal.