Yesterday I ran the Toronto Waterfront 10k for the second year in a row. I’ve had this post recapping last year’s race saved as a draft for an entire year, so I figured I should post it now before recapping the 2017 race. The Toronto Waterfront 10k debuted in June 2016. Previously Canada Running Series had organized the Yonge St. 10k, but there were too many races too close together in the city so they replaced it with the Waterfront 10k. I had a lot going on that week. Here’s a breakdown and recap.

I opted to pick up our race kits on Wednesday the week of the race, because they were offering free yoga and our marathon training clinic was starting that Thursday. 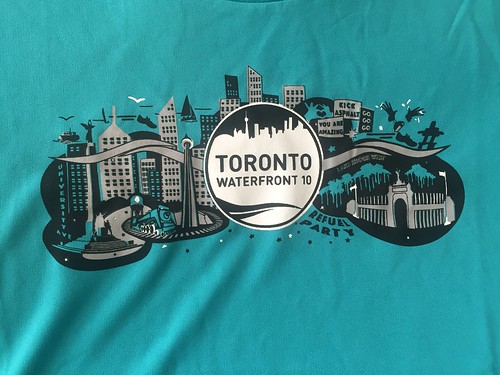 Race kit pick up at St. Lawrence Market was a breeze. I didn’t check out any of the booths at the mini expo because I was focused on making sure we got to yoga on time. Free yoga was taught by Heather Gardner, the founder of Tribe Fitness. Since I hadn’t done yoga in a while, the 30 minute class was a good balance of being both challenging, but not intimidating, and relaxing without being boring. Even Dan (who is anti-yoga) had a good time. After the class we thanked Heather and picked up free full size cliff bars for participating. She told us about the Tribe cheer station that was going to be on the course, and how they were going to have a wading pool, inflatable inner tubes, water wings, etc. and water guns. It sounded like fun. 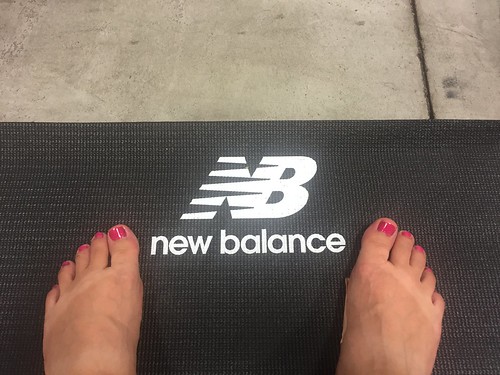 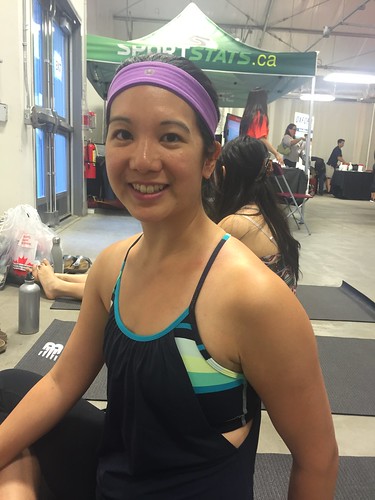 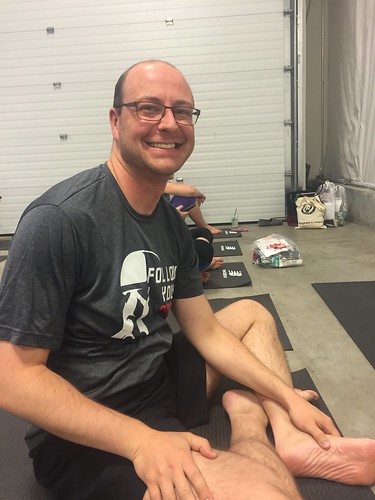 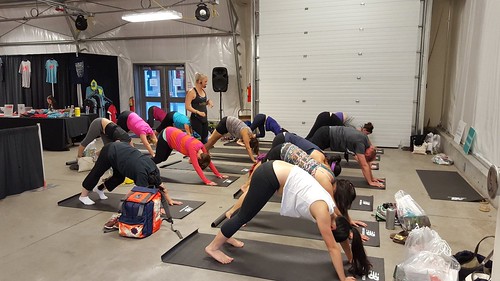 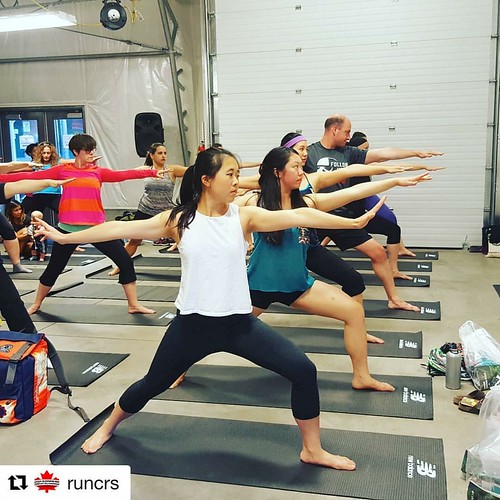 On Thursday evening we had our first marathon training clinic night at the Running Room. Our clinic instructor Larry (who is also a member of the Beaches Runners Club) ran and chatted a little with everybody. While we were talking he mentioned that he was also running the Waterfront 10k on Saturday and that he was an official pacer.

“What time are you pacing?” I asked, foolishly thinking that I might see him/run some of it with him.

“I’ll see you at the finish line.” I replied. Haha. He told me that Allegra was also pacing the 55 minute group. My best 10k time on a flat course is around 54 minutes so then I thought I might run with her. 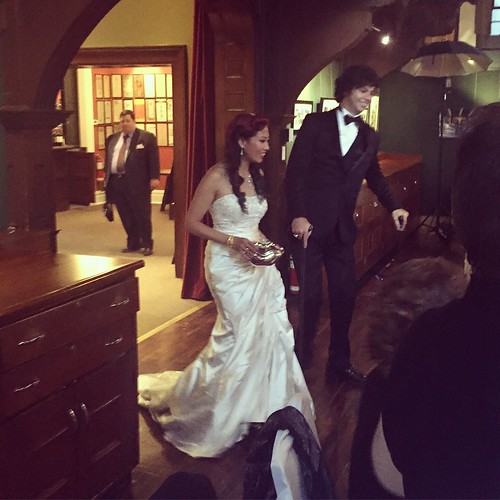 I took a half day off from work and then went to my close high school friend’s wedding. I was happy that we were able to celebrate with Serena and Simon, as well as catch up with old friends and dance up a storm. Of course this meant a very late night, which usually doesn’t lead to PBs the next morning.

Unsurprisingly, Dan and I slept in. There was a mad scramble to get ready and we had to run to the start line. This race starts at 7:30 a.m. to try to beat the heat. We wished each other luck before getting into our corrals. I saw the 55 minute pace sign so I made my way over and found Allegra. It turns out Andrew was also pacing! I told them that I was going to try to run with them. Then I turned around and saw Beth and Ardith. It was exciting to see so many familiar faces at the start.

The race started and we ran downhill for the first kilometre or so. Allegra and Andrew took off and I tried to follow but quickly lost them in the crowd. The buildings in Toronto throw off GPS watches and I heard later that they had to run more by feel than by their watches. I ran with Beth and Ardith for a bit before losing them and then Dan passed me. It was really hot out and I was exhausted from going to the wedding the night before. I knew then and there that it wasn’t going to be a PB day and decided to enjoy as much as possible.

As I headed onto the Lakeshore I saw the elites coming back in. I cheered for Eric Gillis. It turns out this would be the first of two 10k wins in 24 hours in two different cities!

As I ran I tried to keep my mind off of the blazing heat. I cheered for friends in the out and back sections and clapped my hands at all of the cheering sections. Sam was racing the Waterfront 10k and had started further back then me. She caught up to me and when I spotted her I ran with her for a bit and said hi. She was in the zone so I said we should meet at the finish. We agreed on a meeting spot, I wished her luck and watch her take off. Conditions were really tough due to the heat and I admire anybody who still tries to put it all out there.

I reached the Tribe cheer station where I saw Allison and her daughters cheering. It was really uplifting and I was happy knowing that I would see them again on the way back.

Photo by Allison. You can see how happy I was to see her. 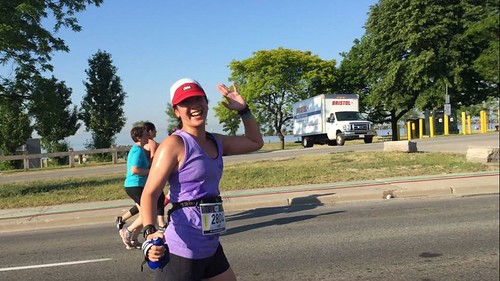 The out and back section seemed to take forever. I was so hot! I said hi to more friends along the way and then thankfully the race was over. I finished in about an hour and while I didn’t PB, I’d say it was a PB in fun.

Photos by Allison at the 8.5k mark. Again, you can see how happy I was to see her and her daughters. 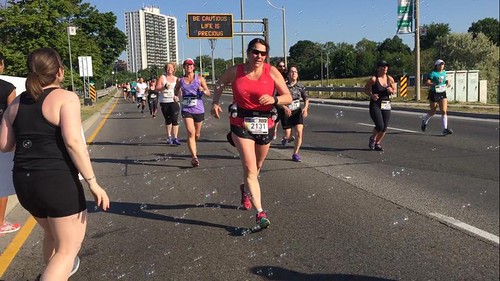 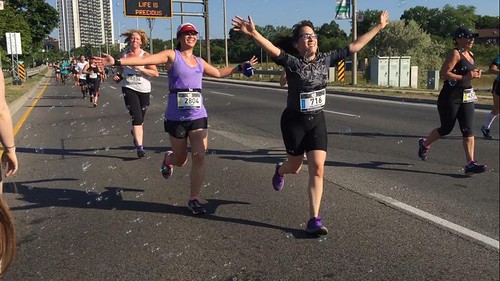 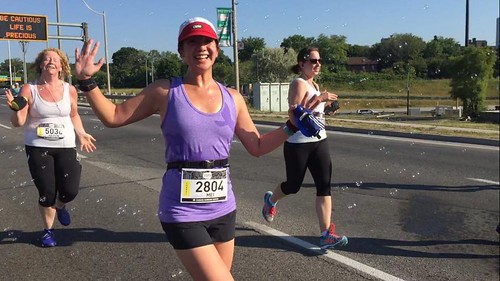 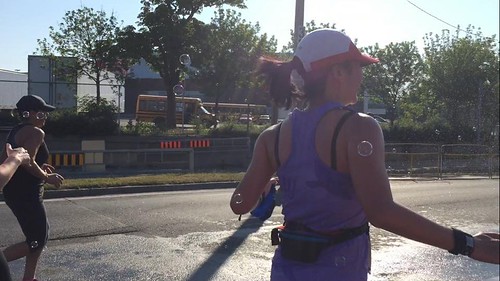 At the finish area I somehow found my friends and we took a few hilarious pictures together. It always astonished me how you can find people you know when there are thousands of runners around you. 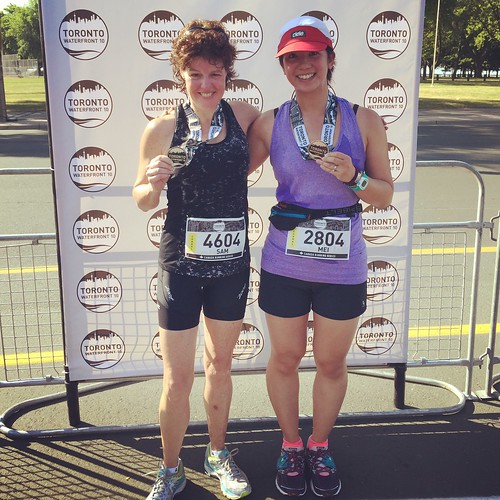 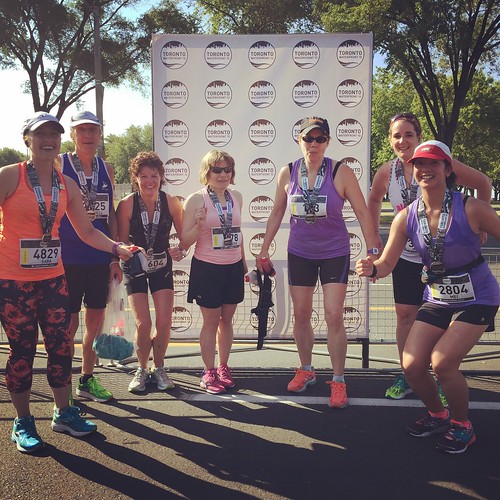 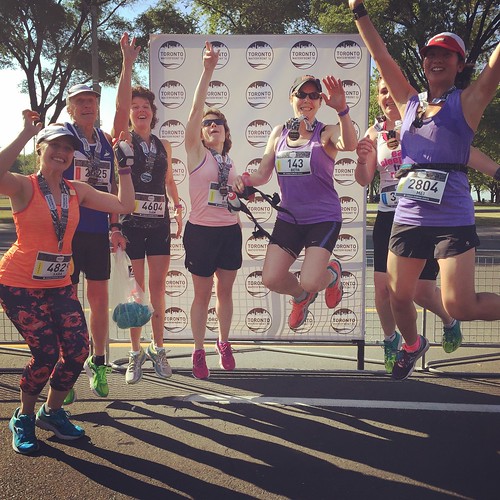 We stuck around in the finish area and said hi to more friends. Karen waited for a friend and ran her in. Then, by pure randomly without any planning, I saw Arlene! I didn’t even know she was running this race! I was a little confused at first because she was wearing her sister’s bib. They had somehow mixed up their race bibs. We took a few pictures together and Dan made us laugh. 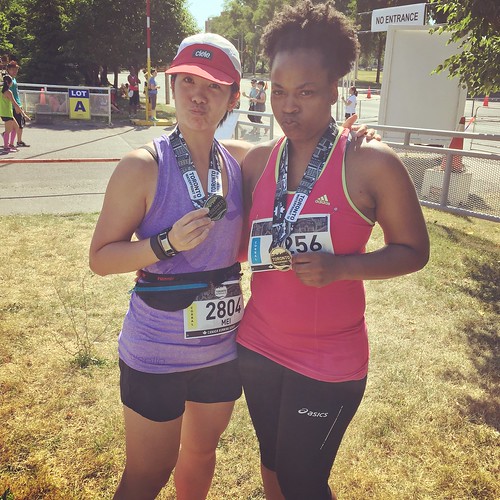 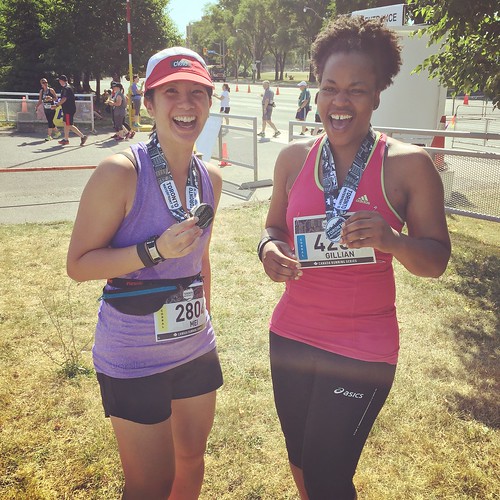 After the race ended Dan, Karen, Sam and I walked up to the Thompson Diner where we had brunch, which included a burger on a doughnut! Overall it was a fun day. 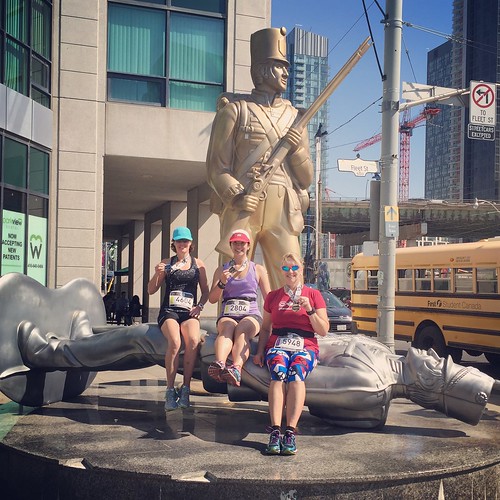 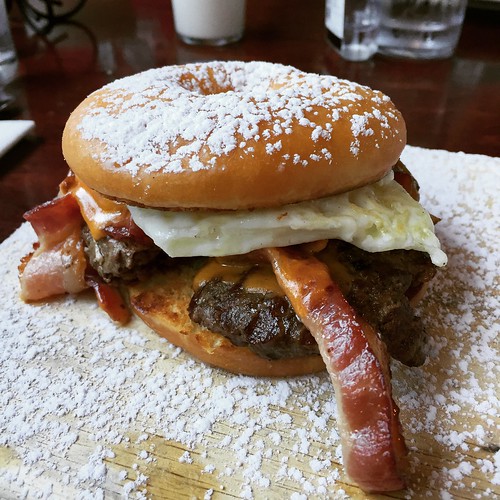 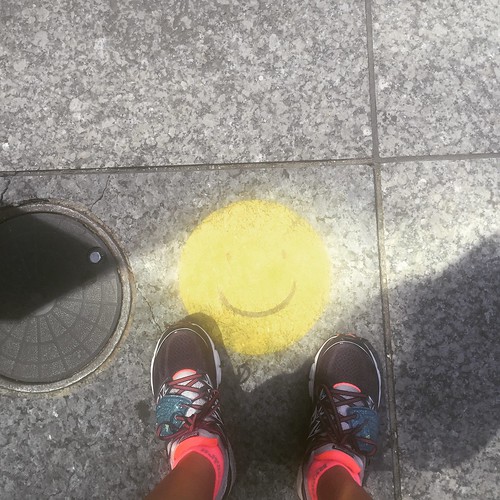 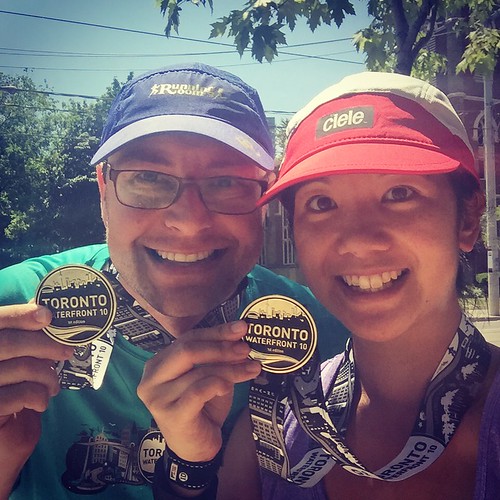