So far in 2015 I’ve run five races and haven’t published a single race report. I guess I have some catching up to do! On March 29, 2015 I ran my third Around the Bay 30k race. This is the race that has kicked my butt for the last two years. This year I was determined to conquer it and finally get my redemption.

Three years of Around the Bay shirts and medals.

My annual picture with my race bib number at packet pick up.

The morning started out in a hazy rush. Usually I lay my clothes out the night before a race but this time I had been too tired. I also slept poorly so naturally this was the morning where I couldn’t find my running tights. I had trained all winter in this specific pair of running tights and tore the condo apart looking for them. Dan tried to help me find them (all of my running tights are black so my description was no help). I could have worn another pair but I felt most comfortable in this pair. Anyway, since I’m usually very calm under pressure I took a moment, took a deep breath and then found them where they had fallen behind some furniture. With the running tights dilemma solved, we were off to the race.

We arrived in Hamilton later than planned but with still enough time to get to the starting line. I found my running group and we all wished each other luck. My plan was to run with Lyndsey from my running group since we were a similar pace and see how it went. When we got into our corral we decided to go to the washroom one last time. Naturally the line up was long and as the race was starting we were getting to the front of the line. I wasn’t too concerned though. I knew that we would still start somewhat on time and that the chip time was what was important to me. Gun time is only important if you’re in contention for an Age Group Award or for a gold or silver Around the Bay medal (Women who run 2:15 or faster get a gold medal and 2:30 or faster get a silver medal. I knew this was out of my league so I wasn’t too concerned).

Somebody was kind enough to film the start and finish of the race and share it on YouTube. If you watch this video you’ll get a sense of how many people were at the race. If you fast forward to around the 9:40 mark and look towards the bottom left of the screen you’ll see me waving at Dan. That’s how far back we were at the start of the race!

I soon learned that one of the advantages of starting near the back is that you get to pass a lot of people. This was a big ego boost and it felt like we were zooming past everybody. My Garmin was still looking for a signal for the first 6k of the race, so I relied on Lyndsey’s pace and my Nike Running app for the first part. It turned out to be a beautiful day with blue sky and sunshine. It was warm (for March) so I had to unzip my jacket a little bit. I felt a little warm but mainly comfortable and was happy that I had swapped my toque for my cap.

At around 8k a really good song played on my playlist and I started to run a little bit faster. My goal had been to run a 6:12 pace for the whole race and finish in 3:09 or faster. This would have me finishing 1 hour faster than last year. We were in pretty good shape and passed the 3:20 pace bunny. I started to think ahead to the rolling hills and thought I should bank some time. I got around a bunch of people but accidentally lost Lyndsey in the process. I found out later that she stuck with me until 15k, so that was nice to hear!

Just before 15k I passed the 3:15 pace bunny and saw Brian and Kevin (aka Sexy Chad). It was nice to see familiar faces and Brian joked that he was going to have to run to beat me. At 21.1k I ran a new personal best for my half marathon time (it was approximately 2:05, my previous PB was in Bermuda, which I’ll recap later). After this point my legs started to get really tired and it was a struggle to keep going. My strategy for the whole race was not to stop at the aid stations and to just use them as a reminder to drink some eload and water. One of the things that I’ve been working on is proper fueling, so I spent the winter training with eload, water and chocolate flavoured powerbar gels, so these were my go to for race day. I made sure to have a third of a gel every 30 minutes and found that this made a big difference in how I felt in the last part of the race.

The hills were killer but I persevered. The last 7k were absolutely excruciating. I was tired but knew that I couldn’t stop to walk because it would be too hard to start running again. I made it through the last 7k by high fiving as many kids as possible and concentrating on running strong. As we passed the church there were people standing outside of it waving palm leaves at us and blessing us (it was Palm Sunday). This is one of my favourite parts of the race. The race organizers had to cut out the big hill near the end but this didn’t make the last 5k any easier. The last 5k were extremely windy and I thought I’d get blown away. Before I knew it, I was at the reaper. This year there were two Grim Reapers instead of one so I high fived one of them and kept going.

Me with the Grim Reaper last year. Nice guy. I didn’t stop to take my picture with him this year.

With 2k to go I saw bunny ears up ahead and started running faster. When I caught up to the pace bunny I was in complete disbelief. It was the 3:05 pace bunny! I kept saying to myself “I can’t believe it! No way!” (though I was probably saying it out loud since I was getting out of it). With 1k to go I saw Cathy S., who I had been training with since November up ahead. I was so excited to see her that I caught up to her and we said hi. We both said how strong we looked and other words of encouragement. This was a huge boost and helped me pick it up for the last kilometre. Before I knew it I was racing into First Ontario Place (formerly Copps Coliseum) and they were announcing my name. If you look to the right side of the video below you’ll see me raising my arms when I hear my name before crossing the finish line.

Overjoyed I crossed the finish line with a chip time of 3:00:59.5. Hard work paid off and I crushed my time! As I was going into the finishing chute I heard a familiar voice. My mom was in the stands taking pictures of me on her iPod. This was the first race that my parents came to so it was wonderful to see them. Overall it was an exciting race day and I was happy to finally get my redemption. I’ve already decided to run it again next year though when they put the hill back in. Also, this has become one of my favourite races due to its challenging course, supportive spectators and exciting atmosphere.

Me with my medal. I was so excited I forgot to take the bag off of my medal. lol.

Here’s a comparison of my times between last year and this year. I love tracking my progress.

Next year I may try to shoot for a sub 3 hour finish! 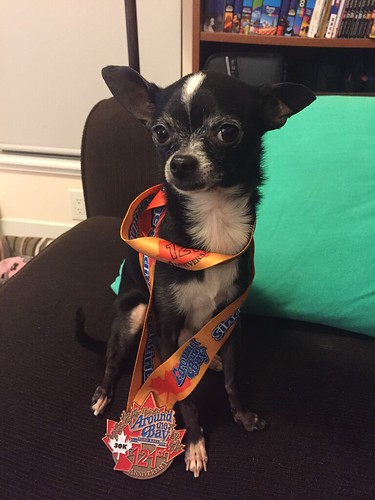 Daisy proudly shows off my medla.