Less than a week after running Around the Bay, Arlene and I were back and ready for more. Apparently we signed up to run races three weeks in a row, so there’s still one more to go after this one. 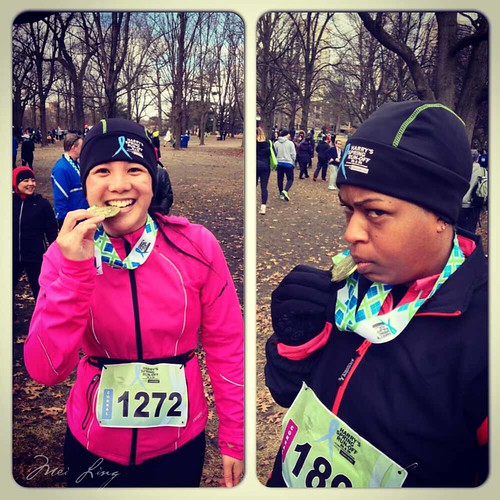 Arlene and I with our medals after finishing Harry’s Spring Run-off 8k.

Harry’s Spring Run-off is a popular local race that takes place in High Park. As its name implies, it’s one of the first races of the spring and includes a fast field of elite athletes, as well as regular runners like me. Harry’s Spring Run-off is also known for its rolling hills, ending with the very challenging Spring Road Hill in the last 400m of the race. Fun Fact: The winner for the women’s 8k this year was actually Krista DuChene, who just won Around the Bay last week. So that was pretty cool!

I got up that morning feeling pretty good, until I looked out the window and saw the light snow flurries. Oh well. At least it wasn’t raining. Reluctantly, I got my winter running jacket ready (it’s my only running jacket with a hood).

Arlene and I met up at High Park and found a place to huddle with other runners. It was windy and I longed to see the sun. I joked that I was crying icy tears. 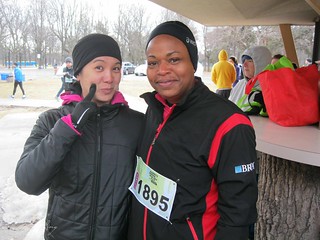 Arlene and I before the race. I’m crying icy tears.

They announced that there would be a group warm up so we joined a very small group of people. I didn’t care how ridiculous I looked since I knew that the warm up would help. The instructor led us in Bokwa Fitness, which is a workout involving writing numbers and letters with your feet. She was very energetic and even though I’m generally uncoordinated the workout was easy to pick up. We ended up having a lot of fun and the warm up definitely did what it was supposed to. I think I also saw someone from Get Out There Magazine filming so maybe Arlene and I will end up in the race report for half a second. 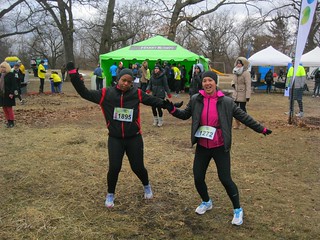 Getting ready to warm up. 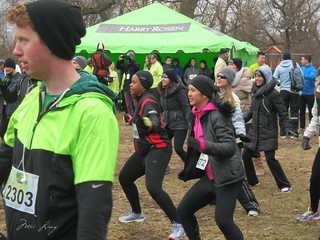 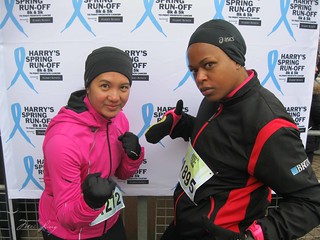 Warmed up and ready to go. Got our game faces on and looking a little crazy.

A little after the warm up it was time to head over to the corrals. As is tradition, they had a bagpiper play and the runners followed him to the starting line. 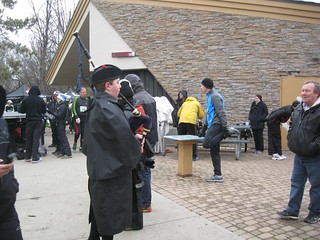 The bagpiper. We all followed him to the corrals.

For some reason Arlene had placed herself in the slowest corral (for finishing in an hour or more) so Dan and I made fun of her relentlessly. This was mainly because Arlene and I have run 10k in under an hour before, so it seemed ridiculous that it would take her over an hour to run 8k, even with the hills. Arlene complained that she was going to tell Jason that we were making fun of her. I said that when he found out why we were making fun of her he’d probably make fun of her too. Anyway, Arlene decided to join me in my corral since we typically run at the same speed. 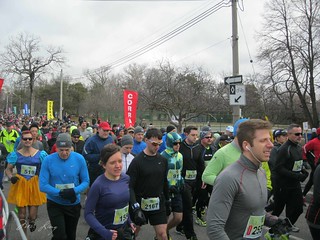 There’s a contest for “best dressed” and I think the guy in the dress won. The back of his dress was open because he couldn’t do it up all the way. He was also a pretty fast runner!

Soon we were off and running. I lost Arlene early on and started to look for her. After a while I realized that I was looking for her purple coat and that she was actually wearing her black coat. At that moment she was suddenly beside me, so it all worked out. As we went up one of the many rolling hills together and a gust of wind hit us with the flurries swirling around us I said “My face is frozen.” We ran about 3k together and then I lost her again going downhill. I tend to tackle downhills really well so my strategy was to exploit all the downhill and flat areas as much as possible to make up for my slower uphill runs. Arlene tends to be more cautious running downhill because she worries that she’ll fall. 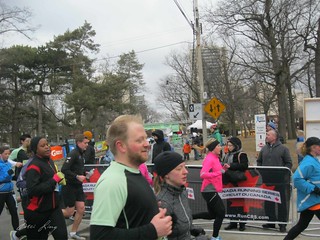 Arlene running. You can also see part of my arm.

Just before 4k I stopped to drink Gatorade and water. The Gatorade was icy cold and the water was even colder. It felt good but I could only have a few sips. Dan was there to cheer me on and said he’d see me at the finish. The second half of the route was much easier. There seemed to be less rolling hills and more downhill areas. The hills that they did have seemed to be easier (or maybe I was just more used to it by then). I felt good and stopped at another water and Gatorade station at 7k. They had my favourite Gatorade, Cool Blue (I always tell Dan that it tastes the way I imagine blue would taste). 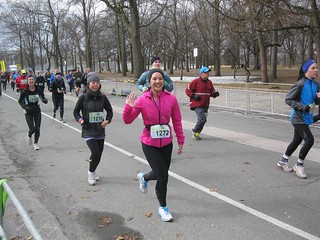 I was feeling ok until we hit the dreaded Spring Road Hill. With 400m to go I saw that the clock was at about 49 minutes. I knew that I didn’t have much time if I wanted to finish in under 50 minutes. Let me just say I will have nightmares about this hill for the rest of my life. As I slowly climbed up I started thinking about all of the other hills that I’ve run. The hill at the end of Around the Bay, Pottery Road Hill, Chinguacousy Hill, the horrible hill in the Monster Dash, the hills in Caledon, the hill at 19k in the Montreal Rock n’ Roll Half marathon and so much more. It was like a flashback of every hill I’ve ever run went through my head. I was determined not to walk. Dan cheered for me and said he’d see me at the finish line, so I kept going. 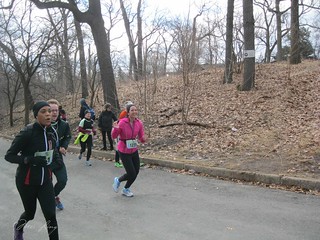 Running up Spring Road Hill. I didn’t realize how hunched over I was! Terrible form! Something to work on for next year.

At the top of the hill I saw the most glorious sight. The finish line. I made my way over and finished in 51 minutes (chip time). Even though I didn’t finish in under 50 minutes I was still happy. I felt good about how I ran (and I held back in a few places since we have a 10k next week that I desperately want to finish in under an hour). I also felt good knowing that I was able to run a pretty good 8k less than a week after running 30k. Last year after running Around the Bay I had to call in sick the next day because I was so sore. This year I felt much better and even did kickboxing class two days later. So those to me are other indications of success and improvement.

After crossing the finish line I grabbed some more Gatorade (more Cool Blue!) and water. A volunteer put my hard earned medal around my neck and another volunteer gave me the coveted Harry’s Spring Run-off hat. It’s a really nice hat. Much nicer than the t-shirt and I know I’ll wear it proudly. I stood in line to get my picture taken with the background and Arlene found me. She was only a few minutes behind me. 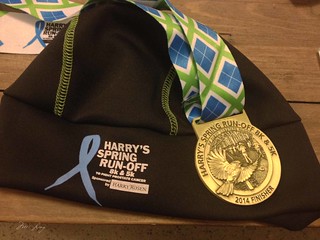 My hat and my medal.

As we stood in line we saw a group of runners who we know from the Bramalea Running Room. And by know, I mean we see them all the time there and sometimes chat with them about running afterwards, but don’t actually know any of their names. We refer to one guy who we always talk to as “Beard Guy” though Arlene is convinced that she knew his name at one point. They’re really nice and friendly and he said “You guys need to tell us when we’ll be at the same races!” and then we joked around, with him joking that he’s always in front of us (This is true. They’re also fast runners!). We also ran into them at Around the Bay last week, so it was funny to see them again. 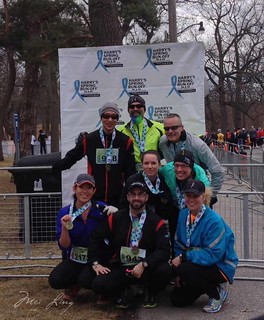 Runners from the Bramalea Running Room. We don’t know any of their names. 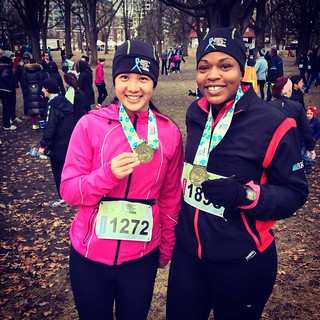 Arlene and I happy to have finished and holding our medals.

After getting our picture taken we grabbed some bagels, yogurt and other snacks. They also had a pancake breakfast but we didn’t stay for it. Since we were done running, the flurries disappeared, the sun came out and we saw blue sky. 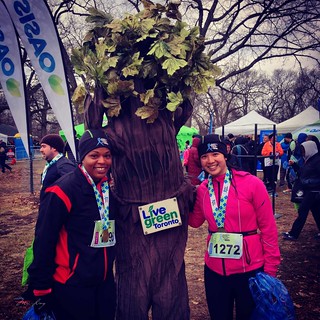 We also decided to take a picture with this tree! He/She was very nice. 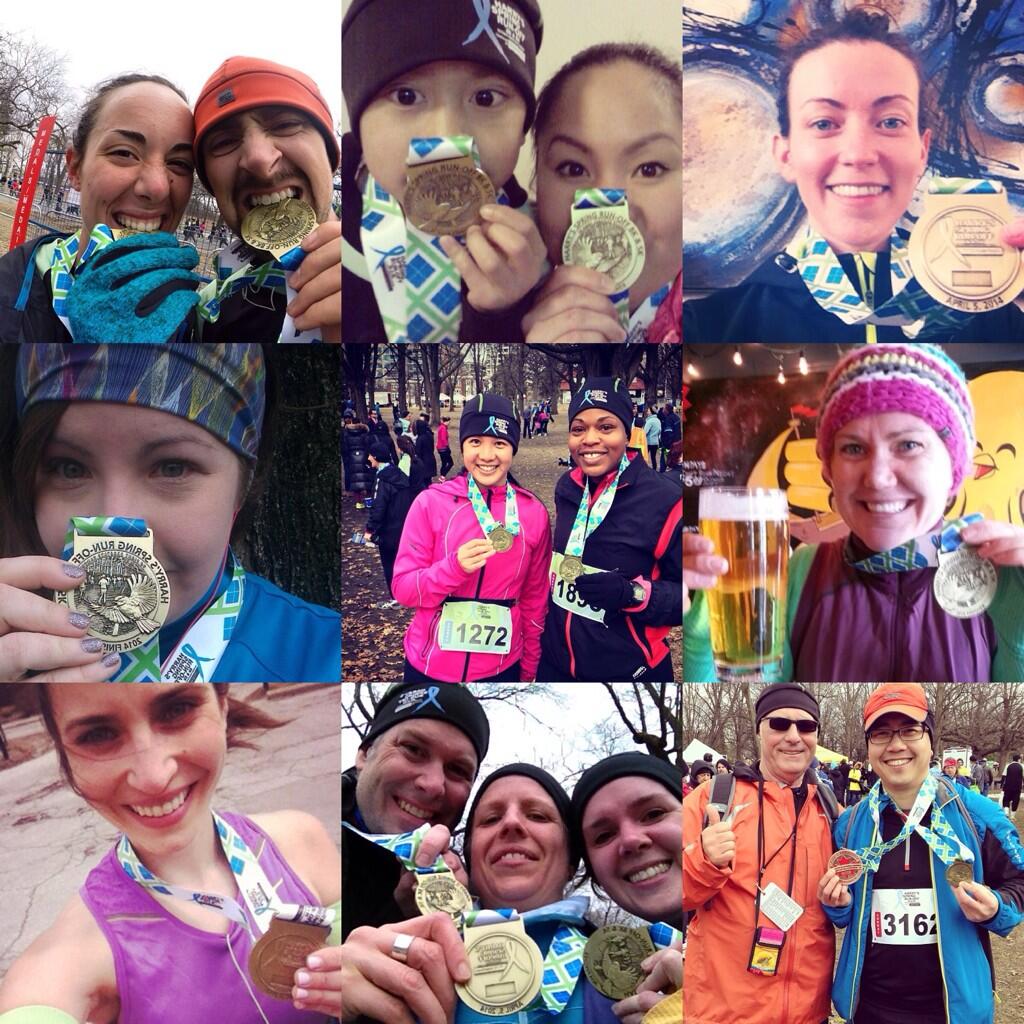 Canada Running Series also used our picture in their collage of runners with their medals on Instagram and Twitter. So that was pretty cool too! Glad to be included with all the happy runners. Source: @RunCRS

Overall we had a good time. I’m already thinking about next year. If I finally train properly for Around the Bay, then I’ll be primed and ready to tackle the hills in Harry’s Spring Run-off too! Just something to think about.