There are only two times a year when the roads on and around the Las Vegas strip are closed. One of those times is New Year’s Eve. The other time is for the  Rock ‘n’ Roll Las Vegas half and full marathons. 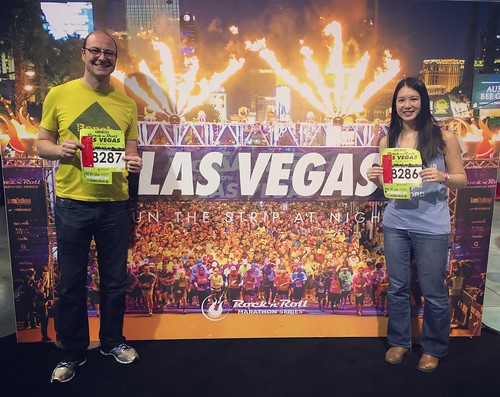 Dan and I with our race bibs at the expo.

Dan and I love Vegas and given how fun the Rock ‘n’ Roll race weekend seemed it was an easy decision for us to sign up. In addition to the half and full marathon distances, the weekend includes a 10k and a 5k. The 5k is held the day before the other three races, and if you complete both the 5k and one of the other race distances you get a special “Remix Challenge” medal. Not being one to pass up on a challenge, we opted to run the 5k as well. 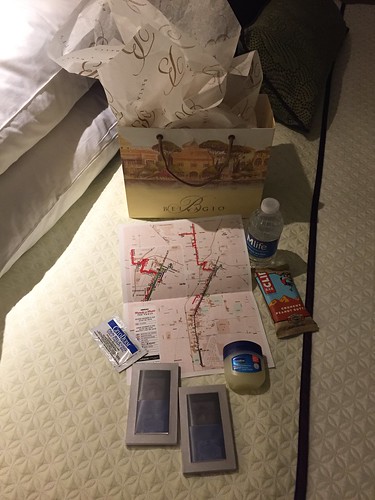 All of the hotels on the strip offer special rates for race participants. We opted to stay at the Bellagio and when we checked in, they had a personalized letter for us and a gift bag! It was a nice touch.

On Friday morning, after hitting the Bellagio’s breakfast buffet, we headed over to the Las Vegas Convention Centre for the expo. We bought three-day monorail passes at a special rate, which proved to be valuable. We used the monorail a lot that weekend and the passes more than paid for themselves. We arrived at the expo at about 1 p.m. and it was busy but not as busy as it could be. The expo runs for three days and I had heard that Saturday is the busiest day with crazy line ups. It took us less than five minutes to get our race kits and t-shirts. After that we were free to explore and do some shopping! 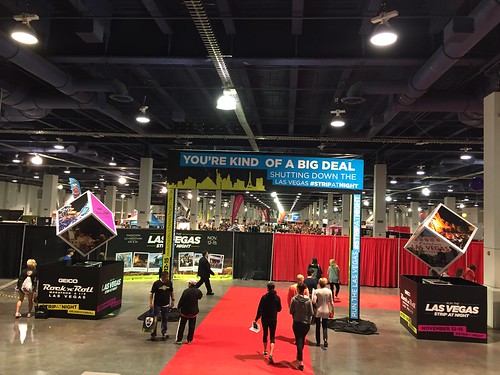 Entrance to the expo. 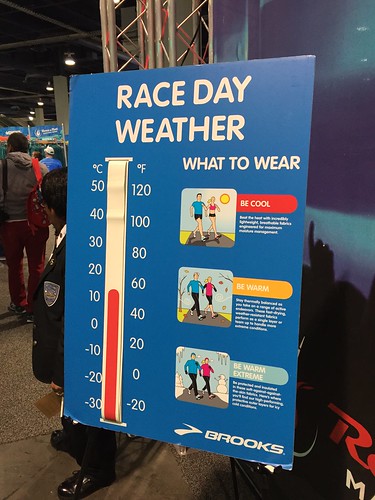 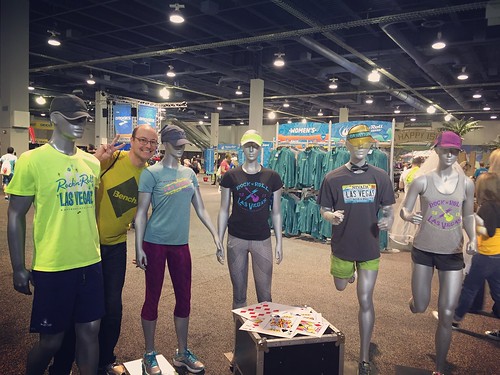 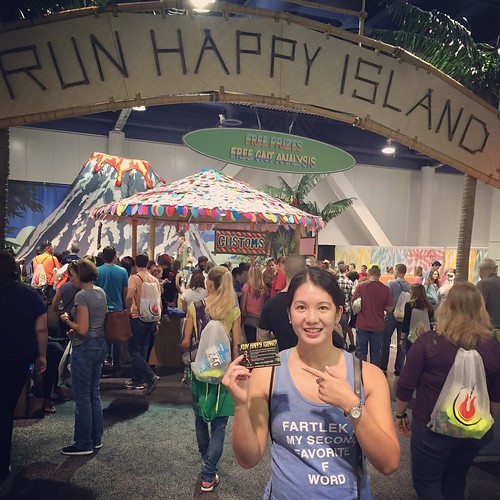 Me with my Brooks Passport for Run Happy Island. 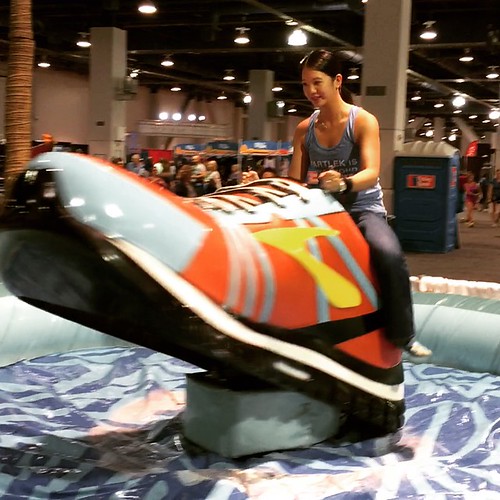 Riding the Brooks mechanical shoe was like riding a mechanical bull but harder. The shoe is wide and it throws you around. I got thrown to the side and banged my leg so I decided to abort the mission and just let myself fall off. Dan was more stubborn and hung on for longer. Afterwards, I had a giant bruise on my leg and Dan made fun of me for the rest of the weekend for getting beat up by a shoe! 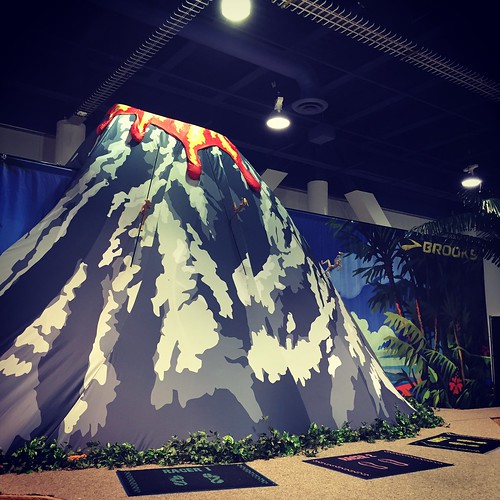 Dan and I competed against each other. The person with the fastest feet got their runner to the top fastest and won! I won! 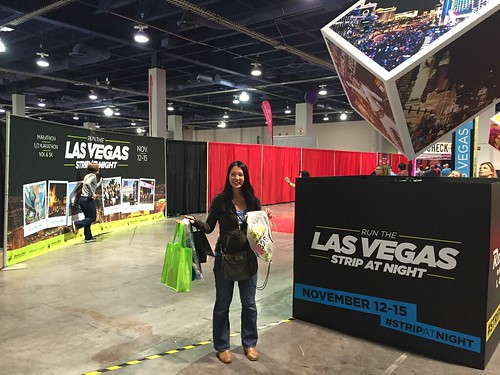 Me with our shopping bags as we left the expo. We did good! I also like how we got the woman posing for her photo in the background.

There was also a gait analysis area in the Run Happy Island but the line up was too long so we went to claim a free piece of merchandise (we each got a Brooks tote bag) and then headed out to explore the rest of the expo. The expo was amazing and we did most of our shopping here. It was a good day!

Later that evening, we saw the Cirque du Soleil show O. It was amazing! They mixed their usual acrobatics and aerials with diving and synchronized swimming. There were times when I almost didn’t know where to look because there was so much going on. Their clowns were also entertaining and one of the highlights for me. 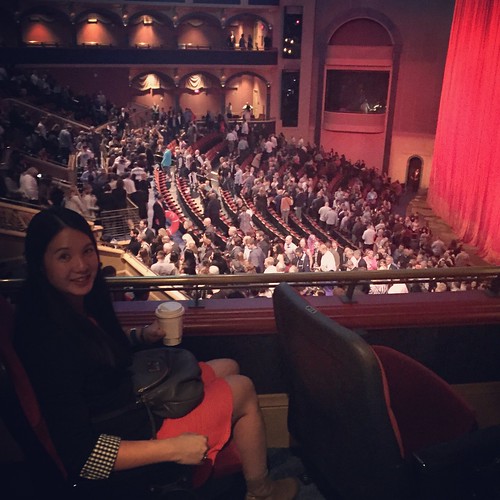 We had awesome seats for O! I liked not having to sit next to anyone either. Nice to have my space and a great view too! 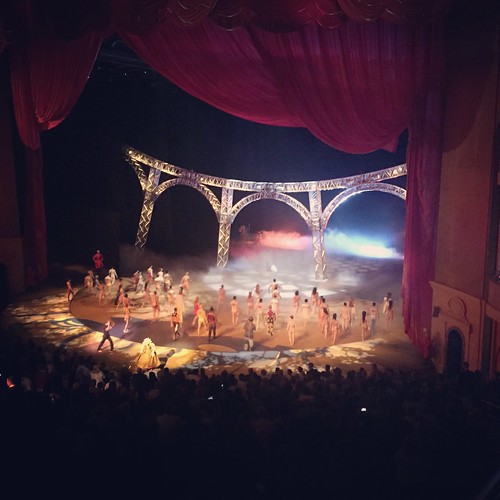 As they took their bows at the end of O one of the clowns held up a sign that said “Photo Op” so everyone took their picture.

After the show we had a later dinner at Picasso where we were seated by the window with a good view of the Bellagio’s fountains. It was relaxing to look out and watch the fountain show every 15 minutes. The food was also delicious and I was stuffed when we left. Some highlights for me were the foie gras and the sea bass. 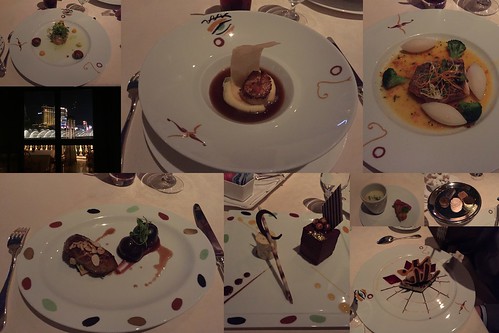 Our food from Picasso was amazing! We both had the Menu Degustation, which included the Maine Lobster Salad, Pan Seared U-10 Day Boat Scallop and Sauteed Filet of “A” Foie Gras. I had the sea bass and Dan had the lamb. For dessert I had the Hazelnut Joconde and Dan had the Earl Grey Cheesecake. Yum!

On Saturday morning we ended up wandering into Serendipity3 at Caesar’s Palace where they were able to seat us right away for breakfast. Dan opted for waffles with strawberries and I opted for waffles with bacon, banana and peanut butter sauce. I know that that sounds like a strange combination but it included all the things I love so how could I go wrong? I later found out that that was Elvis’s favourite combination (bacon, banana and peanut butter sandwiches). Who knew?  The waffles were huge and I told Dan that we were carb loading. I didn’t end up finishing them and felt uncomfortably full for most of the rest of the day. After this, we did some shopping, had a light lunch and then headed out to the 5k race. 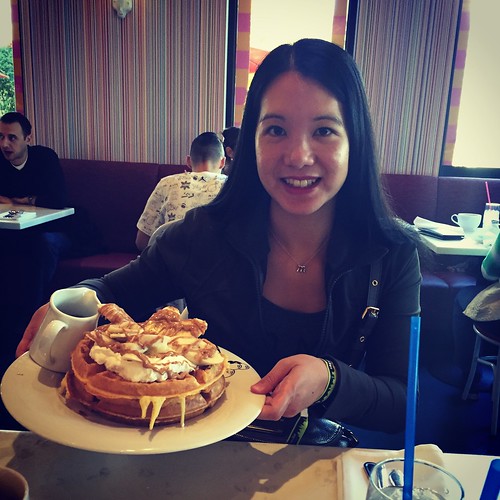 Me with my giant breakfast. It was banana, peanut butter sauce and bacon sandwiched between two waffles with more toppings on top. 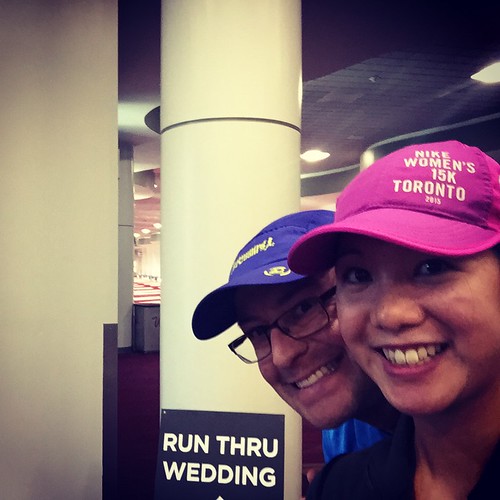 On our way to the 5k race we stopped at the expo for a Run Thru Wedding meeting for the half the next day. It was exciting!

The 5k race was  close to SLS, which is north of the strip. We took the monorail, which was quick and convenient. We, along with a large group of other runners, arrived approximately 30 minutes before the gates to the race site officially opened. Instead of going back into SLS to wait it out, we just sat down on our race kit bags on the sidewalk. The wait wasn’t too bad but it was starting to get chilly. I’m thankful that we were coming from Toronto, which has colder weather than Vegas. People from other climates were really feeling the cold as we waited. 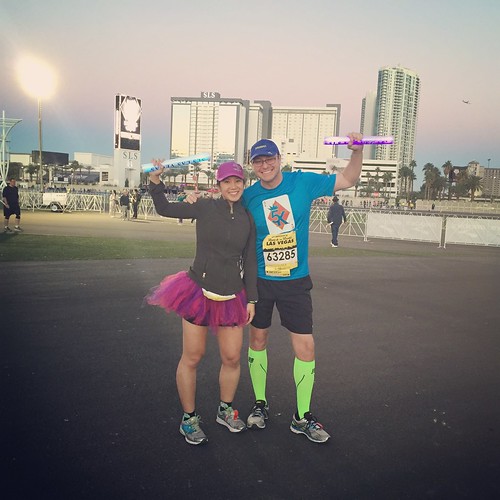 Dan and I before the race. I later checked my sweatshirt.

Dan and I as the sun was setting.

Dan and I before the race. Getting excited!

The race site was in a great location with access to real washrooms. That’s always a plus in my books. The volunteers also handed out free glowing thundersticks that changed colour. As it got darker, the atmosphere got more and more festive. Everywhere you looked there were glowing thundersticks lighting up the night. 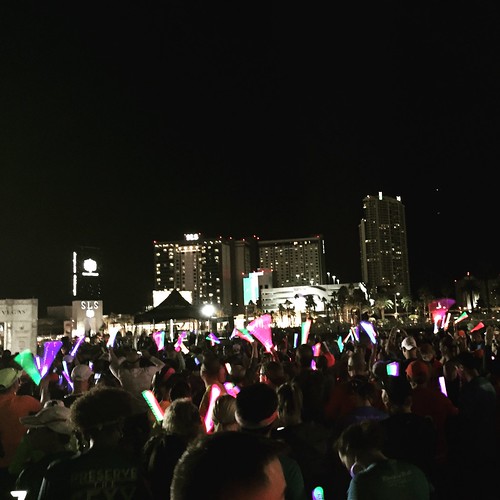 The view from our corral. Approximately 8,000 runners participated!

We were in corral 3 but when we lined up we somehow got pushed back into corral 4 and didn’t realize it. There were over 20 corrals and approximately 8,000 people running the 5k race. I think this may have been the biggest 5k race I’ve ever run. When our corral started it was painfully slow. It was also very humbling because I remembered how the last time I ran a Rock n Roll half, I was the “slow” runner. We’ve come a long way!

It took me about 2 kilometres of dodging people to get up to my 5k pace. I felt really good and the course took us out onto part of the north end of the strip. It took us back into the parking lot where we twisted and turned to add distance. I caught up to Dan and we ran together.

Dan and I running together.

We hardly ever run together when we race so this was fun! I also like how we seem to be matching each other stride for stride.

I could see the finish line and wanted to push my pace but then I realized that we had to do another loop before getting to the finish line. This affected me mentally and I didn’t push as hard as I could. I know this because as we closed in on the finish line I sprinted as fast as I could and I wasn’t that tired. I finished strong with plenty left in the tank.

Crossing the finish line. I felt strong! The best part is I also beat Dan by a second (you can see him behind me).

The best part after I crossed the finish line was seeing one of my running heroes, Meb Keflezighi, standing there with his arm up for a high five. I screamed “Meb!” and high fived him. It was the highlight of the race. Then I saw Dan high five him too and the two of us, beaming from high fiving our hero, walked off to get our medals. We didn’t get a picture with Meb (he was busy high fiving runners as they crossed the finish line) but that’s ok. It was definitely the highlight of my race! 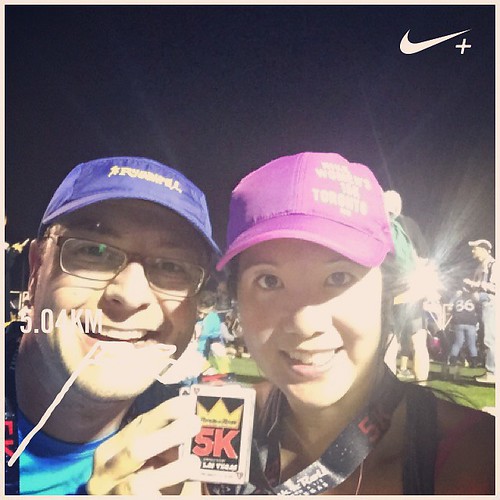 Success! Dan and I with our medals after the race.

Dan and I pose with our medals after high fiving Meb. 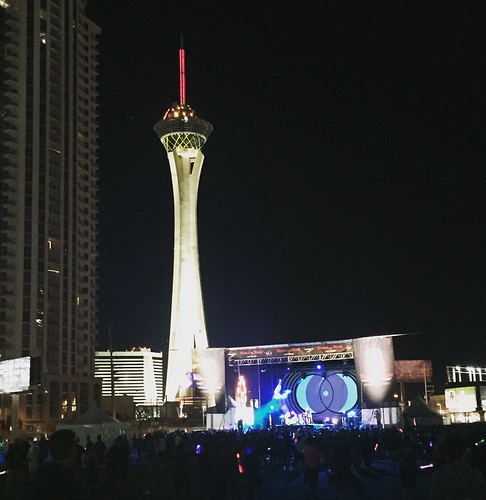 View of the Matt and Kim concert. We would have stayed but Dan didn’t bring anything warm to wear after the race!

After the race there was a Matt and Kim concert, but we decided not to stay. Dan hadn’t checked a bag or brought any warm clothes for after the race, so he was freezing. We made our way back to the monorail, packed on and headed back. I had read that the monorail can get ridiculously packed during the race weekend, but this wasn’t my experience. It was packed, but I ride transit to get to and from work in Toronto and it was nothing compared to what I’ve experienced (e.g. in Toronto I’ve felt like a sardine in a can on the streetcar. Sometimes I don’t need to hold onto anything because all the people who are smushed around me are holding me up).

Overall, the race was very well organized, especially considering the number of runners. I was very impressed. After we got back, we showered, changed and went to dinner at Olives. The food was amazing and the perfect way to finish our day. 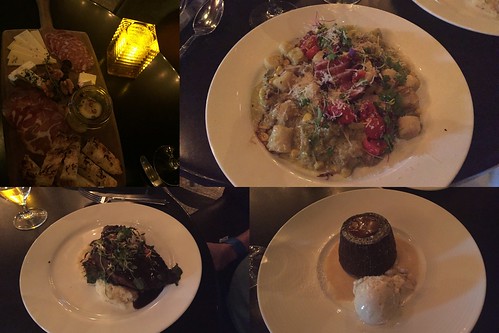 Dinner at Olives was amazing. We had the charcuterie board, I had the gnocchi and Dan had the steak. Dan also had a lava cake with vanilla ice cream for dessert.

One race down, one more to go in the Remix Challenge! Stay tuned for details on our crazy half marathon in Vegas!