Three weeks after running the Rock n’ Roll Montreal Half Marathon, I returned to Montreal for The Color Run! Or as I like to call it, The Colour Run! (I am Canadian after all.) Shannon, Leena, Isabel and I formed a team for The Color Run called The Rainbow Brutes! We had a lot of fun yelling “go brutes!” all weekend. 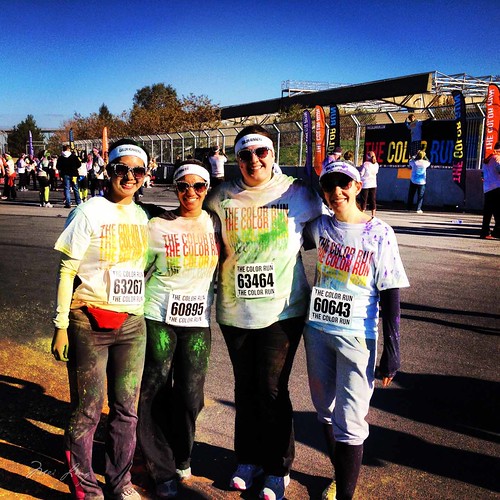 The Rainbow Brutes – me, Leena, Shannon and Isabel at The Color Run.

Back before they became popular, Shannon was the first person to ever tell me about a colour run. After seeing their video and their website, she sent it to me saying that she was interested in doing it. After checking it out I was sold. Shannon was also living in Montreal at the time and since there weren’t any dates in Toronto, it only made sense to do the one in Montreal. I think The Color Run may be the first colour run. Now there are tons of them out there including Color Me Rad and Run and Dye. Known as the “happiest 5k on the planet,” I think The Color Run that we ran in Montreal in October 2012 may have been one of the first ones in Canada.

Leena and I flew out together from Toronto to Montreal. When we arrived it was lunch time, so naturally one of the first things that we did was go for lunch. I had poutine. Nothing beats real poutine from Quebec. 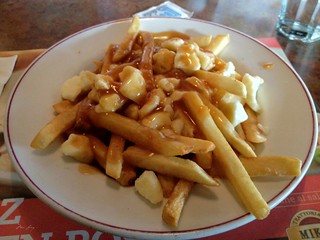 I love poutine. The cheese curds! The gravy! Les frites!

After lunch Shannon wanted to take us to Tache de Cafe for coffee and dessert. When we got there though it looked like it had closed down. 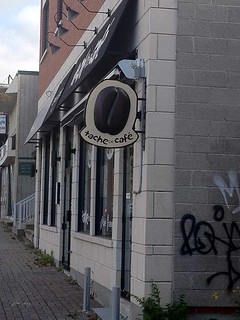 The outside of Tache De Cafe. Too bad it closed. I heard they had great ice cream.

Not to be deterred, we went across the street to a bakery and got some coffee. Shannon also bought some macarons. I loved looking at all of the pretty colours.

The macarons were pretty and delicious!

Afterwards we headed downtown to pick up our race kits at the Delta Centre-Ville for The Color Run. There was a line but race kit pick up was pretty easy. I looked at some of the merchandise but it seemed expensive, especially for a fun run, so I didn’t buy anything. 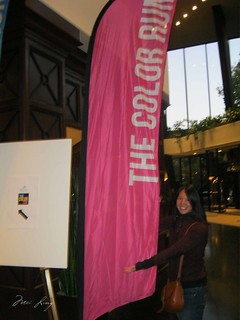 Me at The Color Run race kit pick up.

They were selling some sunglasses with coloured arms, but they seemed kind of cheap for the price. I had bought some fun sunglasses for The Rainbow Brutes to wear. They cost me $1 each. I know. I splurged.

Our awesomely fashionable zebra sunglasses. I felt they made us look more like a team.

Our race kits came with a cotton t-shirt (white and ready to get covered in colour!), race bib, temporary Color Run tattoo, a colour packet (for the end of the run) and white headband.

My colour packet. The colour inside mine was green.

One thing that drove me crazy about the race kit was how it kept using the word “everyday” incorrectly. For example, the bag said “Live out loud everyday.” This is incorrect because “everyday” one word means common or ordinary, whereas “every day” two words means each day. Stuff like this drives me crazy because I work in communications. I know most people probably didn’t notice or care. Ok, rant over.

The offending error on the race kit bag. I’m glad to see it says “chaque jour” in French and not “chaquejour.” (joking!)

For dinner we decided to go to Juliette et Chocolat. This is one my favourite places in Montreal and I now always have to visit whenever I’m in town.

The staff working their crepe magic at Juliette et Chocolat 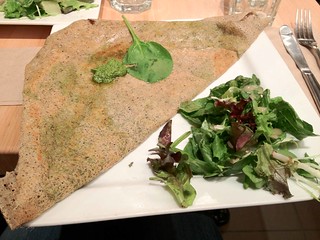 I had a savoury crepe for dinner. 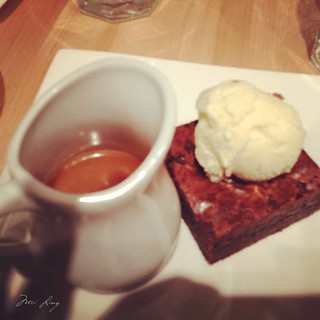 For dessert I had my favourite fleur de sel medley. The salted caramel sauce is heaven.

Return to Parc Jean-Drapeau!
The next day we got ready for the run and hopped onto the metro. The run was taking place at Parc Jean-Drapeau, which was the same starting point of the Montreal Rock n’ Roll Half. It was a cool, crisp day but also sunny. I was happy to see “the ball” (aka the Biosphere) again.

You can see the Biosphere in the distance. It was a beautiful day for a run. 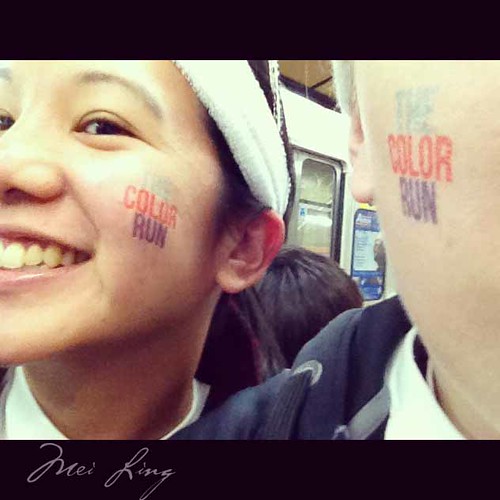 Shannon and I showed off our Color Run temporary tattoos on the metro. 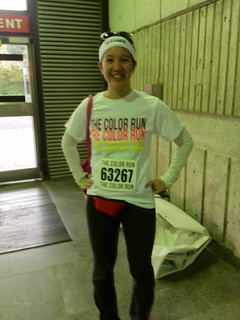 Me ready to run. I borrowed Dan’s spibelt to hold my stuff. He was still cleaning colour out of it months later. Oops! 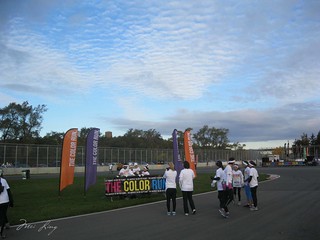 The Color Run all set up in Parc Jean-Drapeau.

We lined up at the start and were at the end of the first wave. They started putting the ribbon up and we decided to get behind it. So instead of being at the end of the first wave we ended up being at the beginning of the second wave. The race started and we were off. I was the only runner in The Rainbow Brutes but my friends decided that they wanted to try running too.

The cool thing about the course was that we could see the first round of colour up ahead. It was just a matter of getting to it. The first colour we got to was yellow. Somehow Leena ran through the yellow zone without getting any colour on her at all! She said she wasn’t going to let that happen again so she managed to get lots of colour at the other stations. I was really glad we had sunglasses because you felt like you were breathing the colour in at each station and I can only imagine that it would have been hard to see without something protecting our eyes. Some people were a little ridiculous at the stations and decided that it was a good idea to lie on the ground and roll around. Let me just say that this is not a good idea, especially when people are running through and there are clouds of colour dust everywhere so it’s already hard to see. I almost stepped on a few people and I’m surprised that nobody got trampled. I loved running through the colour stations and spinning around trying to get as much colour as possible. It was definitely more relaxing than a regular race.

We wrapped our cameras in saranwrap to try to protect them, so some of our pictures have a strange fuzzy look to them.

The saranwrap made this picture a little fuzzy.

I’m happy to report that we made it to the finish and I’m really proud of my friends for running the whole thing. We celebrated at the end by throwing some colour. 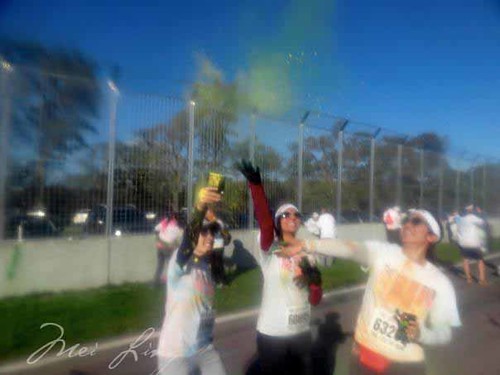 There are two things at work in this picture. The colour being thrown and the saranwrap fuzzy effect. 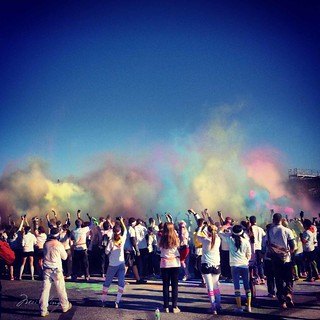 Everybody runs into the middle and throws colour in the air. A DJ plays music and everybody dances. This really was the happiest 5k on the planet!

After playing in colour and taking a bunch of hilarious pictures we decided to head back to Shannon’s. The ride back on the metro was hilarious because everybody was covered in colour.

Last picture with the Biosphere before heading back to Shannon’s.

I took this selfie on the metro to check out the colour spattered on my face.

Leena was also sporting a lot of spattered colour on her face.

After the run (and showering and changing), we went to the mall and ate sushi for lunch, did some shopping and enjoyed David’s Tea.

I love David’s Tea. The founders of David’s Tea are from Montreal so it only seemed fitting to visit a store.

The next day I also completed my Montreal food journey when I picked up some of my favourite Montreal bagels by St-Viateur.

I love St-Viateur Bagels. They have the perfect blend of sweet and salt. I love watching them make the bagels.

It was a quick visit but definitely memorable! I was so happy that I got to spend this time with a few of my favourite Rainbow Brutes. 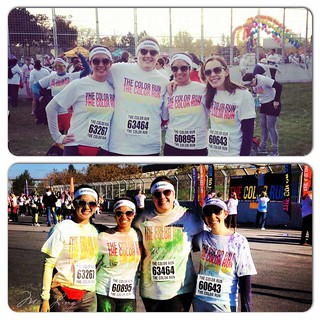 Last look at The Rainbow Brutes before and after. Go brutes!