On the first day of the New Year we headed out to Circle H for a sleigh ride. It was 8 p.m. and the snow was falling ever so gently. I had never been on a Sault Ste. Marie sleigh ride before, and had heard that people here tend to throw other people off. I came prepared with layers of clothes, ski pants and armed with my handy camera. Lindsay told me that when you are four years old and go on a sleigh ride, things seem to be going well until somebody picks you up and throws you over. They stop the sleigh for you so you can climb back on when you’re a kid.

When Shannon, Stephanie and Jamie drove up from Sarnia Lindsay said to them “You’ll want to wear ski pants for when we throw you off the sleigh.” Thinking that she was joking they all laughed. Jamie even said later that he thought we would all drink hot chocolate, sing some songs on the sleigh and that it would be nice and relaxing. Little did he know… The pictures say it all.

The ladies before the sleigh ride

After parking our cars at Circle H

On the sleigh. We couldn't get one with four of us.

Knocking people off the sleigh begins!

Tumbling off the sleigh and taking others with them!

Trying to catch up to the sleigh 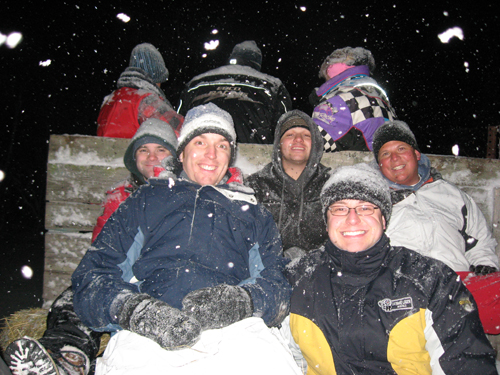