Back in April, I ran my first trail race! I first heard about the 5 Peaks race series from Jaime (who is a 2017 ambassador) and Hanoki. My interest grew when my half marathon clinic instructor invited Michelle and Mark (also 2017 ambassadors) to talk to our clinic about the 5 Peaks series and trail running in general. I love watching trail running videos on YouTube, and since I’m taking a year off from running marathons I thought it would be fun to try something new. A few hours after I signed up the race sold out! I felt lucky to have gotten in just under the wire. A few weeks before the race I also found out that many of my friends were also running it. This all had me pumped up for my very first trail race experience.

The night before Terra Cotta, Dan and I had dinner with some of our running friends (including Karen) and their spouses. We had been trying to find an evening to get together, and of course the only day in a two month period that worked for everybody was the day before my first trail race (which was one of the only days I wasn’t “available”). Not wanting to push our dinner into the summer, I gave the ok to book it for that night. I also developed a pesky cold a few days before the race. Despite all of this we had a great time, with lots of good food and laughter. Unfortunately I didn’t get a great sleep before the race. I woke up with a runny nose, sore throats and feeling tired and achy. Not a good start. 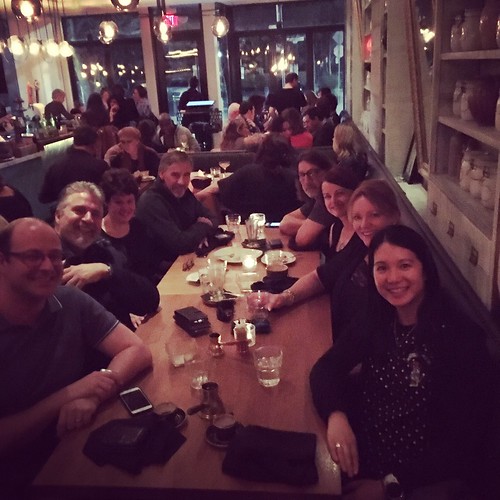 I loved getting together with everyone. When can we do it again?

Dan and I arrived in Terra Cotta bright and early on race day. We ran into Melly and Cathy in the parking lot. Melly also brought her daughter K with her (dressed in a Giraffe jumpsuit). We collected our race bibs and swag (awesome running gloves! There was the choice of green or orange so I opted for the orange). 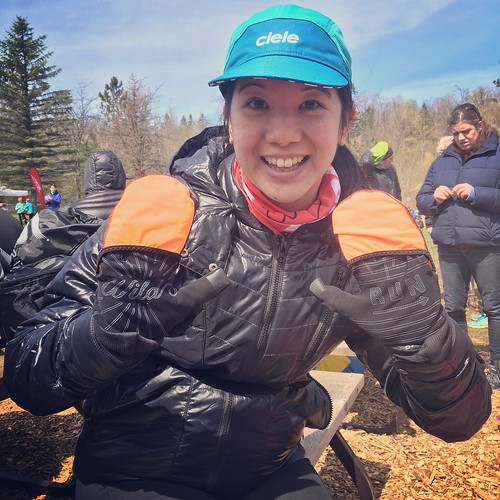 Me with my new 5 Peaks convertible gloves!

It was damp and had been raining a lot that week, which meant that the trail was going to be extra muddy. We met up with Lisa, Lisa and Leanne. Since Leanne was injured she was watching K and also supported all of us by cheering and bringing awesome snacks. It was so nice! (Best race Sherpa ever!) I also found out that low-resolution race photos would be available for free after the race! If we wanted high-res versions we could contact the photographer directly. I love having that option. 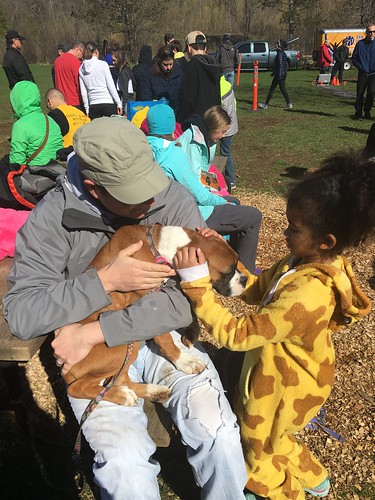 Dan had fun playing with Michelle’s puppy and K. He said to K: “Giraffe, now that Leanne isn’t around, tell me the truth. Who do you like more? Me or Leanne?” K promptly replied: “Leanne.” lol. 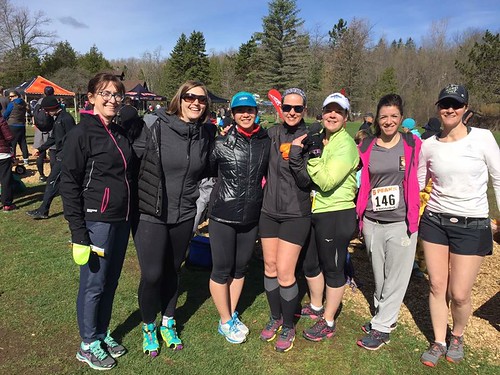 Group picture before the race.

Lisa and Melly ran the enduro distance (two loops for a total distance of 10.8km). Meanwhile Lisa, Cathy and I ran the sport distance (1 loop for 5.4km). We all lined up in the second last wave and then we were off. I was nervous since it was my first trail race and I wasn’t feeling 100%. Lisa ran with me and Cathy and showed us the ropes. It was reassuring to run with someone who was familiar with trail running and who clearly loves it. 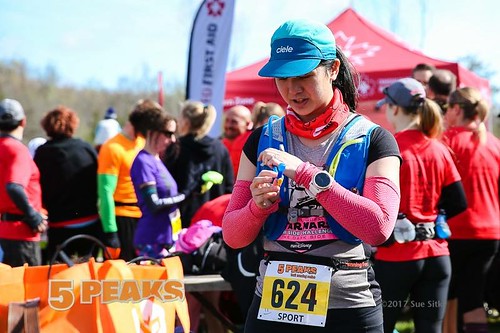 Before the race, Michelle had reminded us all to “run through the mud.” It was good advice. As soon as I saw the mud I knew there was no way around it, so fully embraced it and ran straight through. It was slippery and the mud grabbed your shoes and tried to suck you in. I concentrated really hard on not face-planting in it. At one point, Lisa lost a shoe in the mud! I happened to be behind her and was able to pull it out for her so she could get it back onto her foot.

My nose was running so much and I felt gross. I lost Lisa and Cathy for part of the race but eventually found them again. Despite my gross cold and trying not to fall into the mud, I felt strangely calm. It was so quiet (other than people slopping through the trails) and everyone seemed so chill. I didn’t feel the pressure to try to go fast that I often feel in road races. Walking up hills was no big deal. I spent a lot of the uphill parts grabbing tree trunks to help steady myself. It had seemed cooler when we started but was warming up fast.

We saw the lead runners of the enduro distance pass us and cheered for them. Cathy was trying to move out of the way to let someone pass and ended up tripping and falling. Thankfully it wasn’t in the mud. The other runner also asked if she was ok, which I thought was really nice (she was ok). 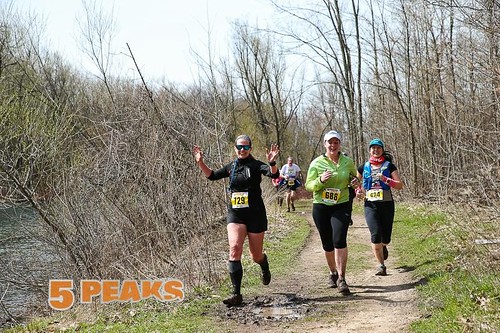 We finished the race and crossed the finish line together. We also got to cheer in Melly and Lisa when they finished. It was so much fun and some of the experienced trail runners told us that these were the worst conditions they’d seen them in. 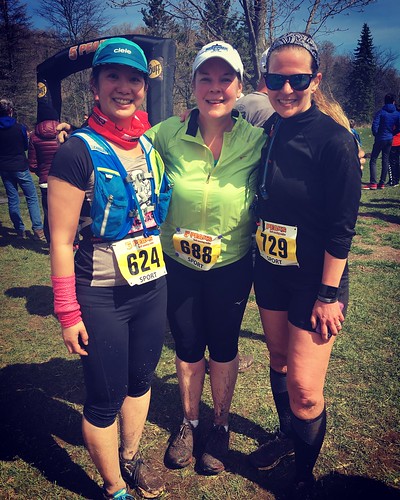 It was so special to finish with Lisa and Cathy. Thanks again to Lisa for guiding us through our first trail race! 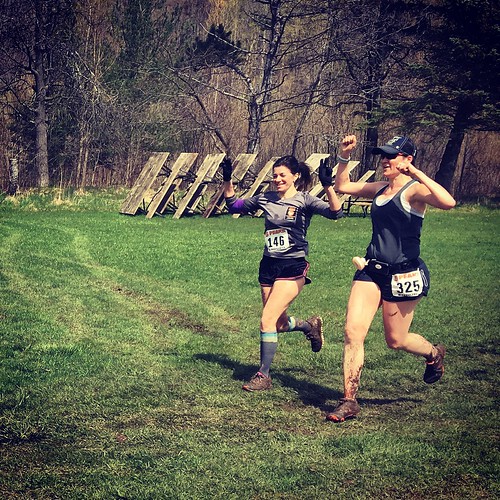 Melly and Lisa finishing the enduro course. They had a blast during the second loop! 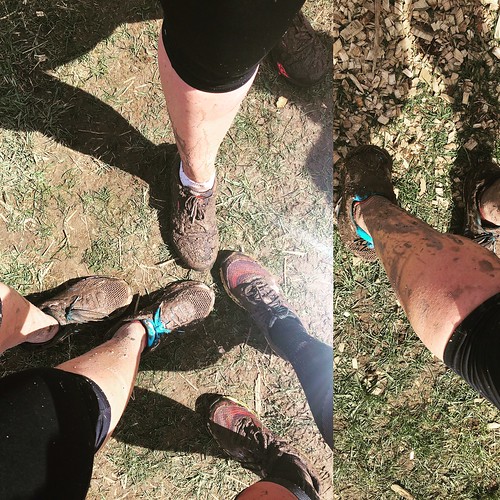 After the race, there was a draw for prizes followed by games like who could hold the longest plank, who could kick their shoe into a bucket (or closest to the bucket) etc. to win prizes. I didn’t win anything but it was fun to watch, especially the flying shoes. They also awarded the overall winners and then the age category winners. One woman won in the 70-79 category and she only looked like she was in her 50s! She also had an incredible time. I was so impressed. Someday I hope to run as fast. 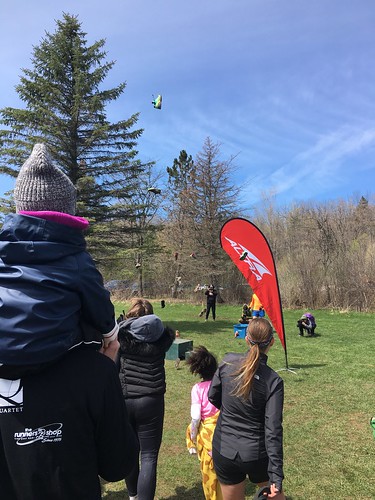 Overall it was a really fun race and when I went home I was happy that I was already signed up for the 5 Peaks Albion Hills race in July (the swag item – awesome socks – was a huge motivator!). I’m looking forward to hitting the trails more! I also like to think that this is where my Ragnar Trail Team The Crazy Eights started to form. More on that in a later post.