Over the weekend I ran my second trail race – 5 Peaks Albion Hills! A while back, Gillian and I were discussing our favourite trail racing videos on YouTube. She asked me: “Is this why you’re signing up for trail races?” I said: “No…I signed up for the socks.”

Honestly, who could resist the socks? They’re so cool! 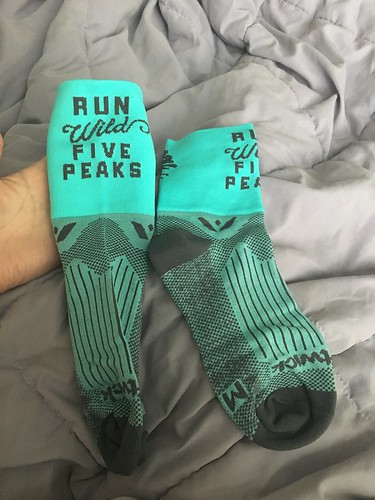 Leading up to the race, the email with last minute race instructions and reminders started with this poem:

The Albion Hills are alive
And all you can hope for, is to survive.
With the squeals of delight,
Until you see the first hill, that’s quite a fright.
The single-track is flowing
But all that could be heard is moaning.
As you come down the last hill
You realize, this was such a thrill.

I had previously suspected that it was a hilly course for a few reasons:

The race email confirmed my suspicions! The night before the race Dan and I had tickets to see Beautiful The Carole King Musical. We always seem to have something the night before a race! My mom is a big Carole King fan so I grew up listening to all of her music. I loved the musical but by the time we got home it was 11:30 p.m. So much for going to bed early. 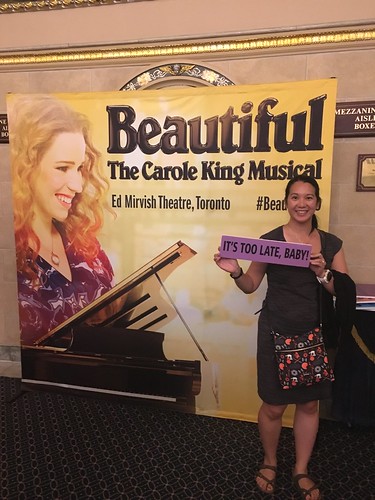 It was definitely too late for me to be up the night before a race!

I was really disorganized on race morning and it took me a ridiculously long time to get ready and get out the door. Dan asked me why I was bringing a small backpack and I reminded him that it was supposed to rain. Rain meant I’d get all wet and muddy. I even grabbed an umbrella for Dan and encouraged him to wear his raincoat just in case. On our way to the race I realized that I had forgotten my bib belt. This isn’t a big deal since I could just pin the bib on. I wouldn’t realize until a kilometre or so into the race that I’d forgotten something more important…

I napped in the car on the way to the race and we got there in good time. In the parking lot, we ran into Cathy, Leanne, Allison, Lisa, Vanessa and Kate! They were all running the race too and it was Kate and Allison’s first trail race. Leanne and Vanessa were nice enough to lend Dan a camp chair to sit on. Ours were old and broke recently so we haven’t had a chance to replace them yet. We tried to use the washroom outside of the splash pad. I was excited for real washrooms! Unfortunately it didn’t open until 10 a.m. (when the splashpad opens) so we headed to the portapotties instead. Unfortunately the portapotties didn’t have hand sanitizer, but after I exited a woman in line called to me and asked if I wanted one of her wet wipes. I gladly accepted it! What a nice (and very prepared) lady!

I picked up my race bib and then got into the very long line for socks. As I got to the front, I found out why the line was so long. You need to give them your shoe size (they had small, medium and large sized socks) and you got to pick the colour (grey with teal writing or teal with grey writing). I went with the teal socks. How could I resist? 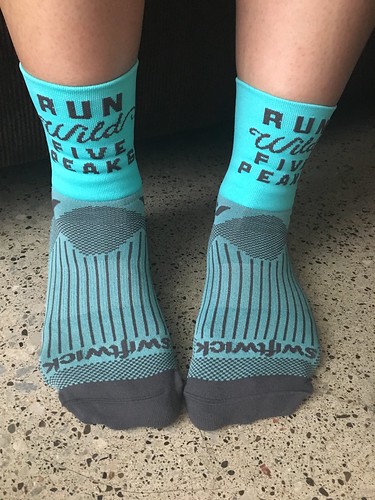 The race started at 9:45 a.m.  I lost count of the waves and couldn’t tell if one wave was wave 3 or 4 so I waited for the next one (wave 5). I was able to start the race with Leanne, Lisa, Cathy and Allison. Lisa explained some of the route to us (that it started on an uphill but finished on a downhill). While we waited to start I also chatted with Leanne and Vanessa about their recent ultramarathon. It sounds like an amazing experience and I’m so proud of them! 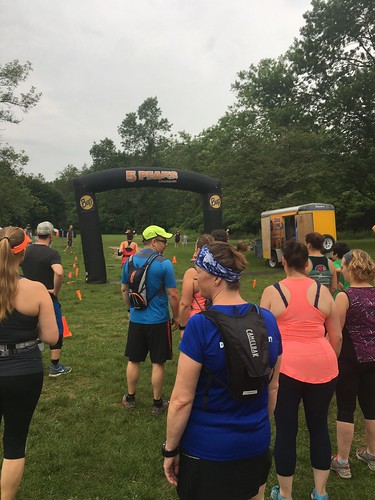 Waiting for the race to start.

We started running and almost trampled the race announcer, who bravely kneeled at the start area to take pictures. 300 metres into the race (all uphill) I already felt tired. It had seemed cooler when we arrived but the humidity was really bad. It felt thick in the air and clung to our skin. Everything felt heavy. I decided to suck it up and enjoy. I heard Lisa reminding Allison to take the time to look around, which was really good advice! 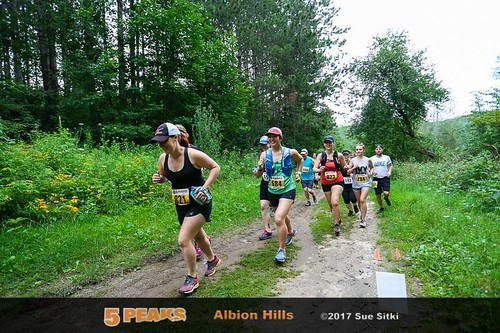 Another perk of 5 Peaks is that low resolution race photos are free! If you want to buy a high resolution version you can contact the photographer, who is also a local photographer! Photo by Sue Sitki Photography.

Earlier that week I had a terrible “tempo run.” It was estimated that it was 35C when you factored in the humidity. I was so tired after the run that I lay on the concrete floor with Daisy when I got home. With this in mind during Albion Hills, I started feeling anxious and decided that I needed to get in a good run. 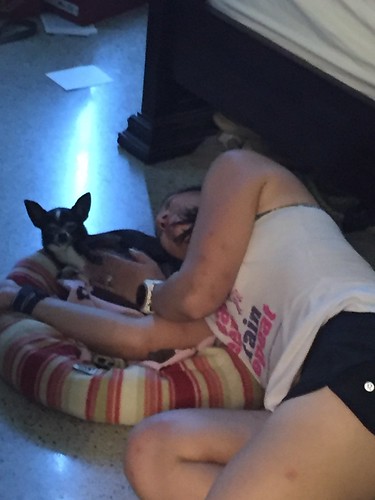 Me on the floor with Daisy after Wednesday’s disgusting tempo run. Daisy loved the attention though.

I lost the others as we headed up the first hill. The course was beautiful. There were trees everywhere and it seemed peaceful. Many of the uphill portions twisted and wound around. I loved seeing other runners navigating the course within all of the greenery. 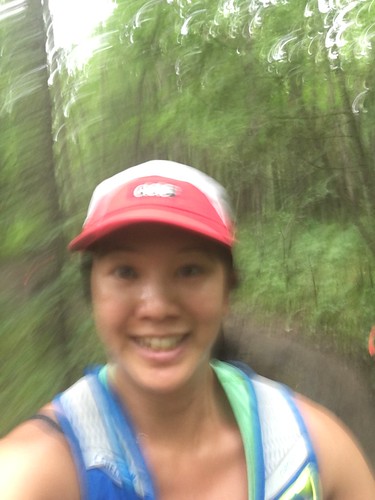 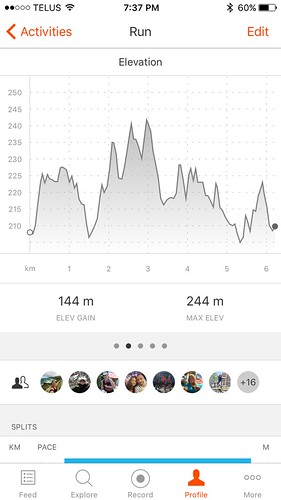 Screenshot of the elevation. It was definitely more challenging than Terra Cotta!

There wasn’t a lot of air circulating on the trails and the humidity made it hard to breathe. Within minutes I was dripping with sweat and out of breath. About a kilometre into the race I realized that I’d forgotten my puffer at home. I was recently diagnosed with exercise induced asthma and the puffer has helped a lot in the bitter cold and during hot and humid conditions. I couldn’t believe that I’d forgotten it! I stayed calm, made sure to take it easy and tried to take lots of deep breathes. I walked when I had to, but ran more than walked this time around. Overall I ended up having a lot of fun. There were a lot of single track sections so I would concentrate on the person in front of me. I’d follow them for long periods of time until they got too fast for me and passed the people in front of us, or I passed them and moved onto following somebody else. At 4K I couldn’t believe how tired I felt (and that I was only at 4K!). I thought about some of my friends who were out killing it on their runs that morning (for example, I knew that Karyn was tackling a 25k trail run in preparation for her fall ultra). Whenever I felt tired I thought of them and I also took Lisa’s advice and looked around. I felt lucky that we were able to run here and made sure to take the time to enjoy it. 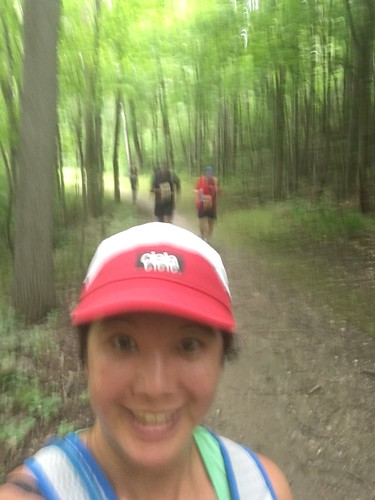 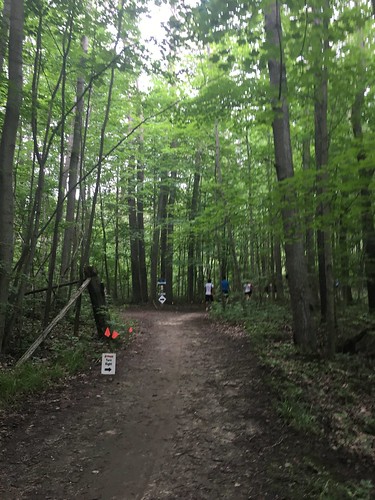 Part of the trail before going back uphill.

Finally, I reached the final downhill section and could  hear (and eventually see) the finish line. I heard Dan and Kate cheering for me as I crossed. I think I heard someone yelling “Good form!” I was so happy it was over and that I didn’t have to do a second loop like the enduro racers! 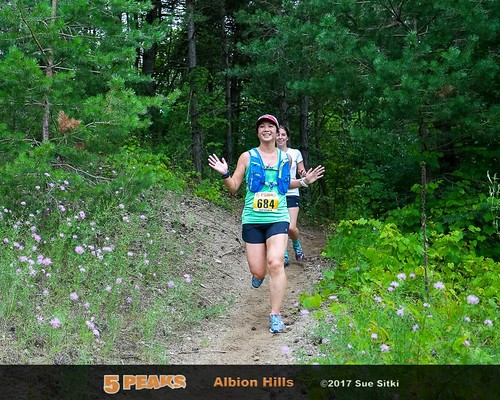 Going to finish the race! This calls for jazz hands! Photo by Sue Sitki Photography. 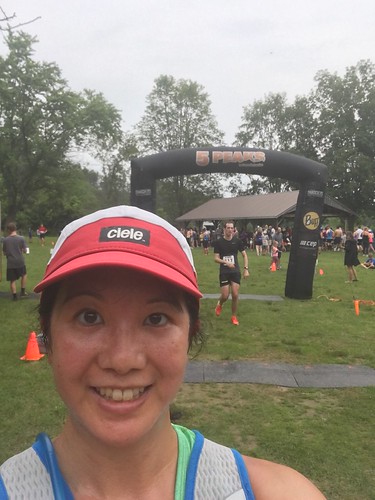 I made my way through the food line where I grabbed a cookie, some watermelon, orange, part of a banana and a sesame bagel. Then I found Dan and Kate and gobbled up my food. I felt hungrier than usual due to the race’s later start time (closer to 10 a.m. I’m used to running earlier in the morning). They also had bowls with popcorn, goldfish crackers etc. but I couldn’t figure out how to get them without putting my disgusting sweaty hands in and contaminating everything. The first thing that Dan said to me when he saw me was “Wow your face is so red!” As I watched people finishing I was glad to see that I wasn’t the only one. Kate, Dan and I cheered as Leanne, Cathy, Lisa and Allison finished. They all looked great and it sounds like they had fun. Dan and I couldn’t stay long so we took a quick picture and said goodbye to everyone. I hope to see them again at the Beaches Jazz Run next week! 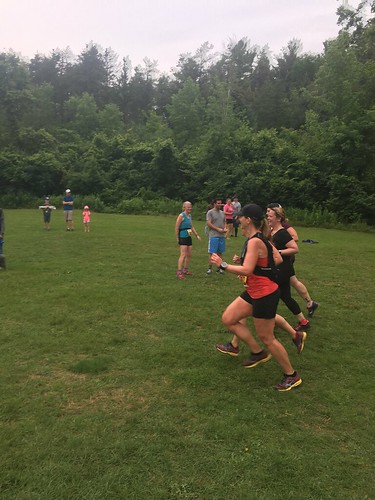 I loved seeing them finish together! 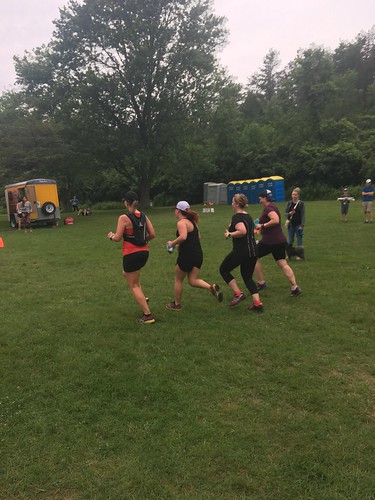 My poor photography skills + friends running quickly to the finish line = a picture of their backs. But look at those strong strides! 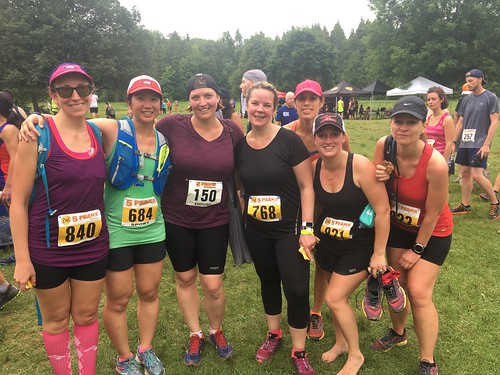 Group picture! I also found out later that Maria (in the back with the pink hat) came in second in her age category! This is her first trail race!