On Saturday I ran the 2017 Toronto Waterfront 10k. Canada Running Series always does a great job organizing events and this was no exception. Lululemon was also this year’s title sponsor, which led to many nice additions to the race. 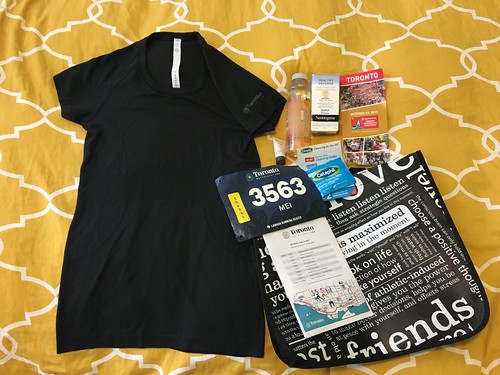 Our race kits had a few goodies. I haven’t had to buy sunscreen for three years because my race kits keep me stocked. I was also really excited about the shirt, which was a Lululemon swiftly tee. Unlike other race shirts, the logo is very subtle, making it likely that this will become a staple in my running (and maybe even casual) wardrobe.

On race day we walked to the start area and checked our bags. Unlike last year, we arrived with plenty of time to get into the corral. Since I decided to wear my RunTOBeer singlet and signed up for the free beer handoff metres in front of the finish line. I’ve always thought this was really cool and always wanted to do it. Unfortunately I missed all of the group photos. I ran into Beth and Julie and we caught up quickly before the race.

By some small miracle, out of the 7,000+ runners running the race we somehow ran into JP’s Team. Sam, Jane, Nanlee and Dan were planning on running in the yellow corral so I wished them luck and headed into the blue corral with JP’s Team. 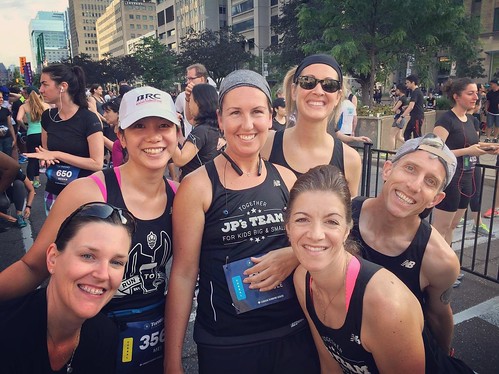 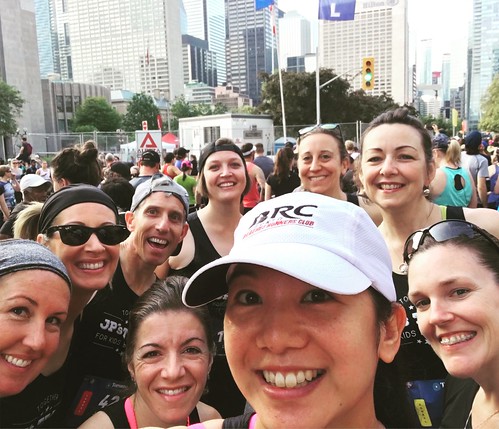 Most of us were aiming to finish in about 60-65 minutes. I had just returned from a three week eating vacation and my lack of training, combined with the heat, meant that I would not be racing. I was feeling so tired and out of shape that if I didn’t have so many friends running it I probably would have taken a DNS. A group of us managed to stick together for the first few kilometres and JP made us laugh. It was cooler than last year, but still so hot that I was drenched in sweat within a few minutes. This year there seemed to be more cheer stations, which helped take my mind off of how hot and gross I felt. I couldn’t believe it when I saw people on spin bikes at one of the cheer stations, spinning and cheering at the same time!

We eventually broke off into different groups and paces. I ended up running with two of my fellow Crazy Eights (my Ragnar trail team! More on that in a later post) Jennifer and Nicole.

I loved running with them! Even though it was hot and I had the disgusting taste of sunscreen and sweat in my mouth, I had a lot of fun. We chatted as we ran and cheered and clapped for all the volunteers who cheered for us. We walked through the water stations and I poured water on myself to try to keep cool. We saw a 72 year old man who was running with his granddaughters and cheered for him. We could see runners heading to the finish line on the other side and started searching for our friends. Cathy, Shane and Dan all flew by one after the other. We said hi to Tracey and Ashley along the course. Shortly after that Scott and Mason ran by on the other side, looking strong. Everybody was all smiles despite the heat.

Scott took this picture of us as he ran by: 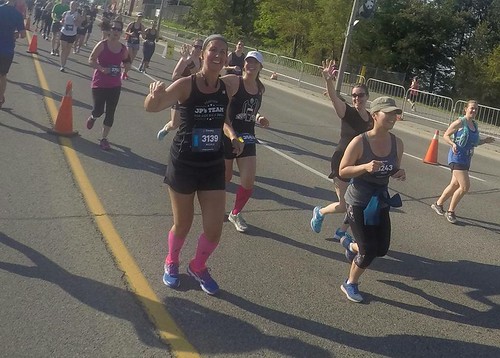 Many run clubs were out cheering. I remember seeing the Parkdale Road Runners (I suspect the streamers and confetti had something to do with them!), and the Night Terrors Run Crew who yelled “RunTOBeer!” when they saw my singlet.

When we rounded the bend to turn around I saw a sign about running for wine and screamed “Yay wine!” It was followed by clapping and cheering. Jennifer and I both started to feel chills, which is an early sign of heat exhaustion. We both drank extra water and Gatorade and poured water on ourselves at every station. This helped a lot. As we were running up the final hill the person in front of me turned around and it was Carmy! She was running with Allison’s daughter Chloe so we cheered for them. They looked great and we heard Carmy motivating Chloe, who had never run this far before! I also took a few pictures of them, screaming to Chloe “I’m taking pictures for your mom!”

With 400 metres to go I saw The Howlers, RunTOBeer’s cheer squad. I was so happy to see their flags and hear their cheers as I got closer. Jess handed me my beer (a Muskoka Brewery lager) and we headed towards the finish line. I had forgotten that everybody gets free race pictures thanks to Lululemon. Usually when there are free pictures I look for every camera and smile and pose as I run by. This time I was having so much fun that I totally forgot about the cameras and it shows in the pictures. 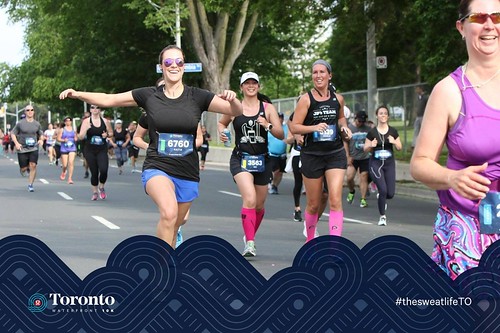 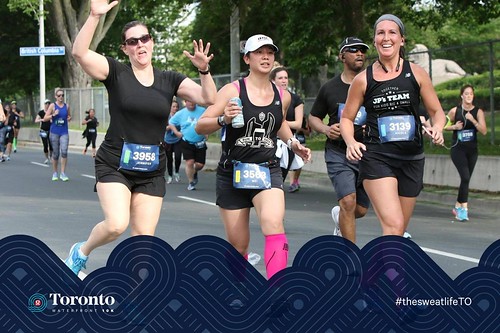 Finally we were on the last stretch to the finish line. I saw Sam, who had finished earlier, cheering from the sidelines. The finish line said “If you can read this then keep running” so we thought for an angry moment that it wasn’t the finish. Thankfully it was and the three of us crossed together. 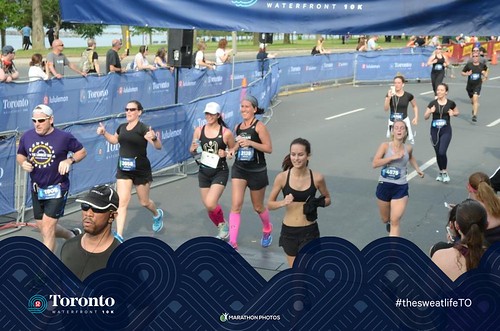 As we walked through the finishing chute we kept our eyes peeled for Allison and her daughter Aimee, who were both volunteering. We spotted Allison and she put our medals around our necks and gave us each a hug. It was so special to get our medals from her. 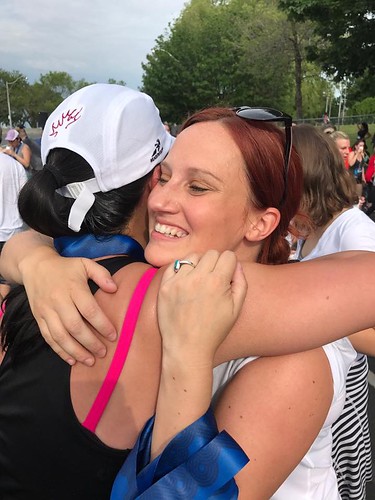 Shortly afterwards, Chloe and Carmy finished and we watched as Allison put a medal around her daughter’s neck. There were also more hugs as we caught up with JP and Mary-Anne (JP had paced her during the race). Meanwhile Melly had paced Ange to a new 10k PB! Kate and Cathy were waiting there too, having both run strong races. We also saw Leanne run in and everybody hugged her. This was her first race back after two stress fractures. Even though she wasn’t able to run, she had continued to support all of us at our races. I can’t even put into words how good it was to see her back and running. 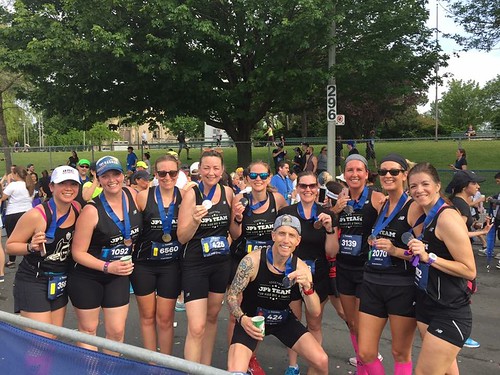 We said goodbye to Allison and made our way through the finishing chute. They had very ripe bananas, Power Bar samples (I grabbed a chocolate and peanut butter one), disposable lemon-scented moist cotton towels (every race should have these!)  and finally, the famous doughnut wall. There were so many runners going through that the volunteers couldn’t restock the doughnut wall fast enough. For a moment I thought they were all gone, but we were informed that the boxes at the end were all full of doughnuts and to help ourselves. I grabbed one that was covered in blue icing. It was a nice post-race treat, though I could only eat half of it. 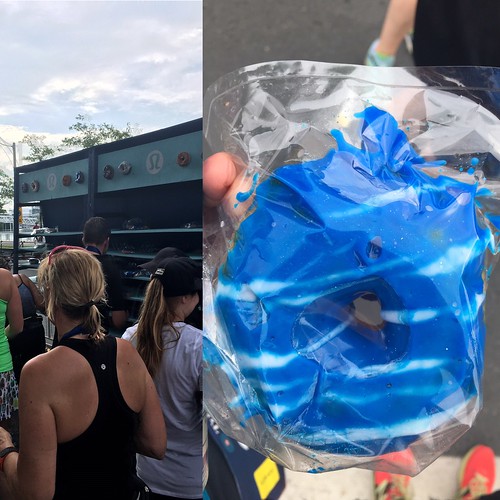 Considering how busy it was, it was pretty cool that we managed to stick together in the chute. This didn’t last long. I picked up my bag and when I turned around I’d lost everybody. Since the race shirt was black and all the team singlets were black, it seemed like it was next to impossible to spot anybody. I was stuck in a sea of black running shirts. I wandered around and somehow found Cathy. We made our way out of the chute together and after many texts, we eventually met up with everyone again. Karen let me know that Dan was in the J section in the friends and family meeting area so I said goodbye to JP’s Team and went to find him. 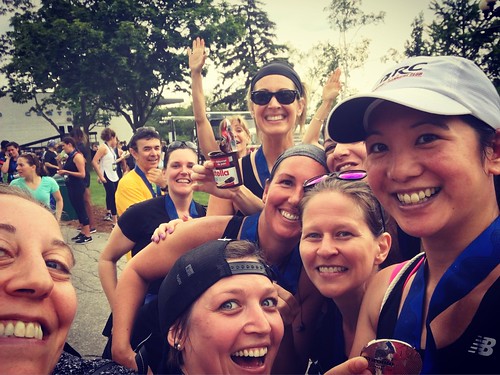 The finishing area had yoga, hammocks, tables and chairs, food trucks and exhibitors. It was pretty cool. I picked up some juice, yogurt and morning rounds before I found Dan relaxing at a table. He was making brunch plans with Jane, Nanlee and Sam. Since one doughnut wasn’t enough, we decided to try to go to the Thompson Diner and have another burger on a doughnut. 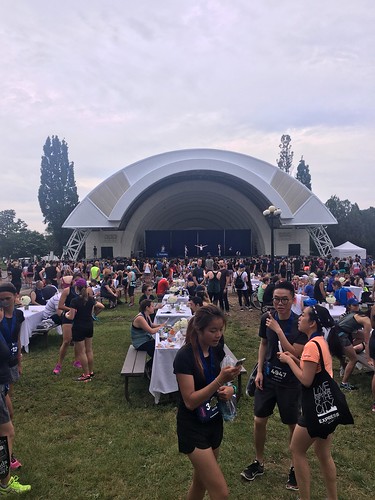 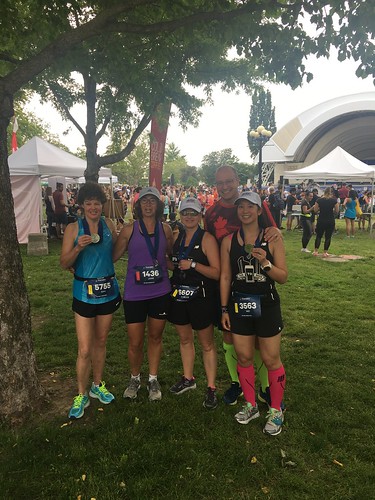 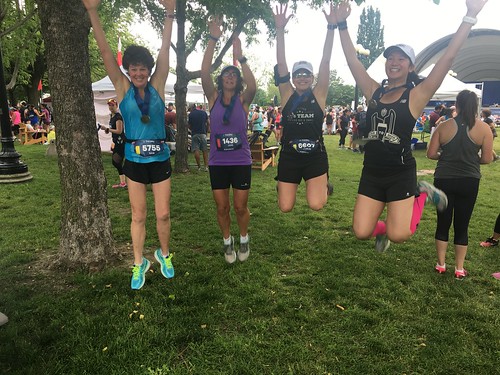 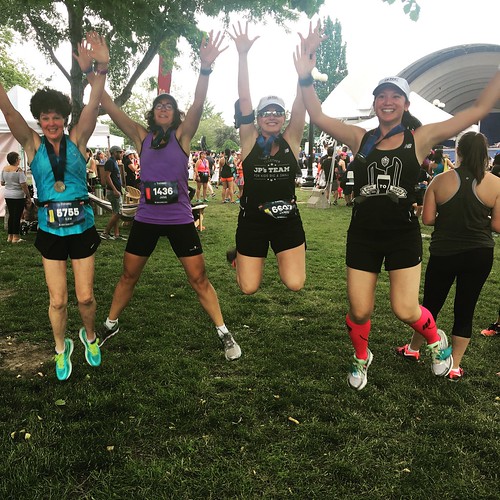 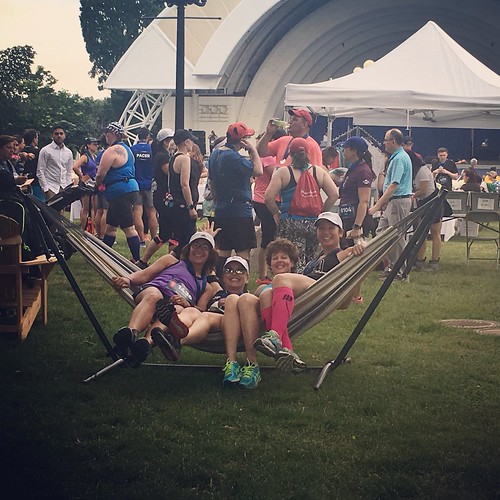 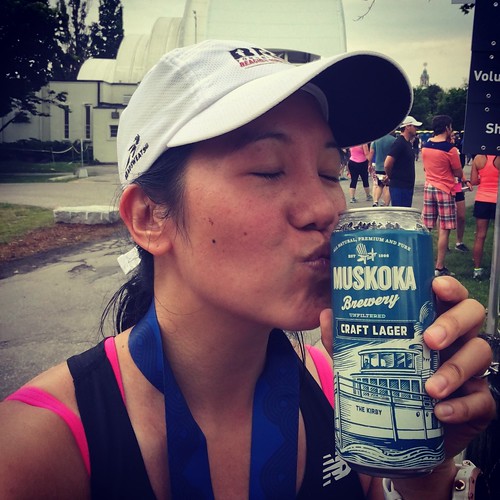 We wandered around and I suddenly realized how close we were to The Craft, where RunTOBeer was hosting the official race after party. This was hilarious because Leanne and Peter had both asked if we were going there and I had said no. They arrived right after we did so we ended up getting booths next to each other. 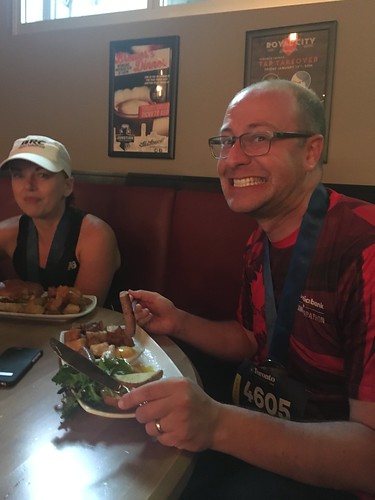 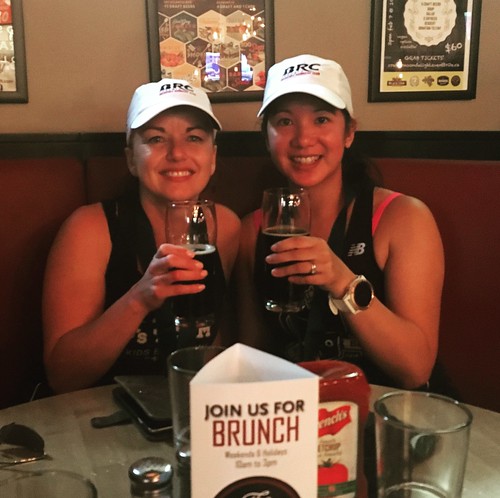 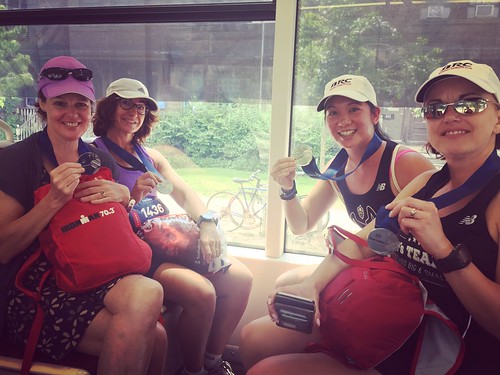 Overall it was a really fun day filled with lots of love, hugs and laughing. Canada Running Series and Lululemon did an amazing job organizing this race and I’m looking forward to next year! 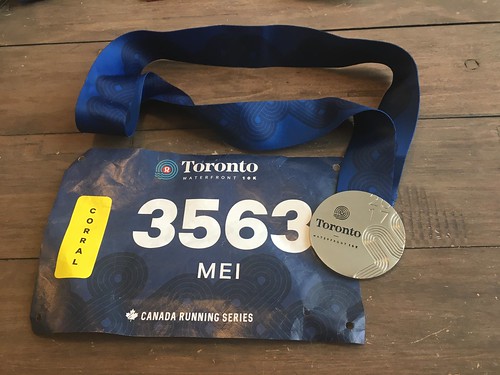 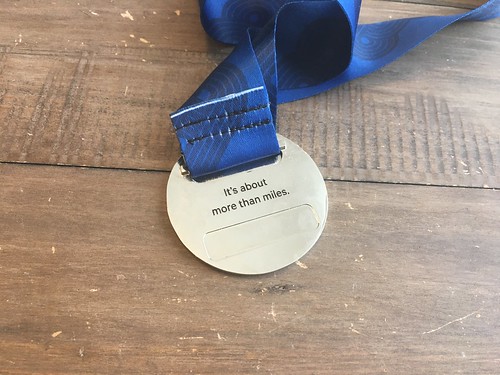