I’ve been pretty delinquent about writing my race recaps this year, so I’ll try to catch up. A few weeks ago I ran the Yorkville 5k. I haven’t run this race for two years but I think it may become one of my annual races. At $100, registration for the race is pricey for a 5k, but the race and all of the goodies (race kit and post-race) are well worth it. The race included free race pictures (including race pics sized for the web, full sized pics and pictures with your time and the logo on them). A few other compelling reasons to run the race is that it is for a good cause, with runners raising money for charity. Finally, the Canadian National 5k Championships also take place before the race start, so if you get there a little earlier it’s a fun opportunity to see the elites (and other fast runners) in action. Shortly after signing up for this race, Allison, who I know from Instagram mentioned that she was putting together a team for it. I decided to join her team and meet her in person, which was pretty exciting! 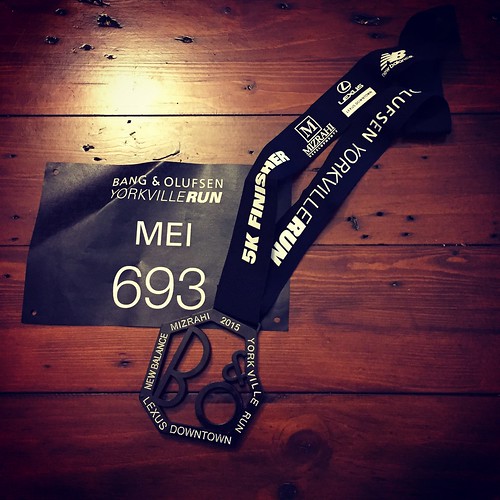 This year’s Yorkville Run race bib and medal. The medals were huge!

A major highlight of the race is the amazing race kit. Having heard that last year’s race kit was quite spectacular, I was not disappointed this year. My race kit included a full New Balance outfit (retails for more than $140). I received a New Balance tech tee, long sleeve 1/2 zip and running capris. Amazing! The tote bag was created in collaboration with The Dialogue Project, which raises awareness and funds for mental health organizations. The tote bags have the signature Dialogue Project elephant on them, representing the “elephant in the room.” I love the significant of the bag and will proudly carry it around the city. 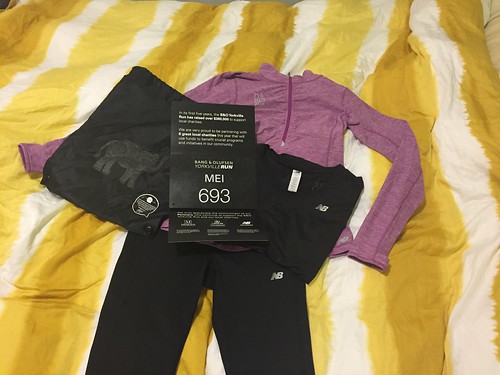 On the morning of the race I got up bright and early and ran to the race start. The race is a little over 4k from where I live and since the subways don’t run that early on Sunday mornings I decided that I could use it as a warm up. Also, I was supposed to run 26k that day and thought I could try to add mileage this way (*spoiler alert* I did not run 26k that day). I got to the race and went up Bay Street just in time to the hear the horn blare and watch the championship runners take off. It was exciting. 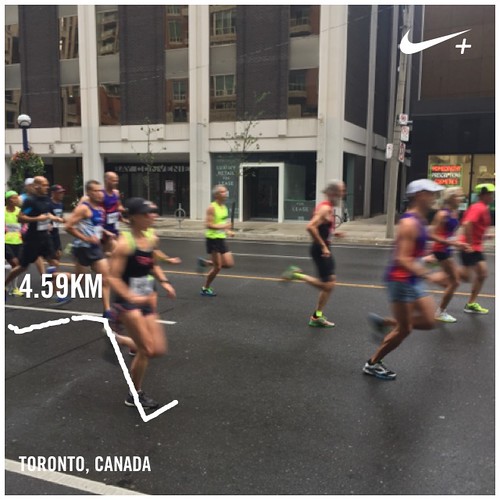 After the championship race started I made my way to the finish area, put my jacket on to stay warm and watched the finishers. The first place male was Matt Hughes (the recent gold medallist in the Pan Am Games 3,000 metres steeplechase), who finished in 14:16. The commentator noted that this was his first road race! The first place woman was the Canadian 10,000 metre record holder Natasha Wodak, who finished in 15:57. I watched in awe as the other championship runners finished and cheered for as many of them as I could. They all put it all out there and it was incredible to watch. 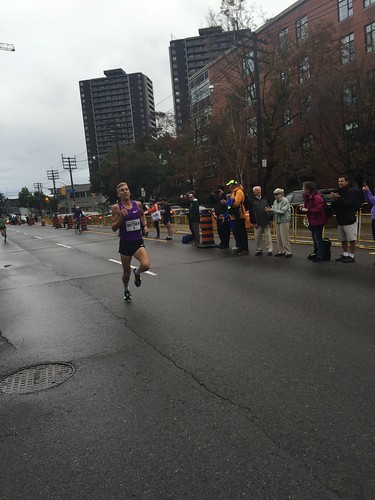 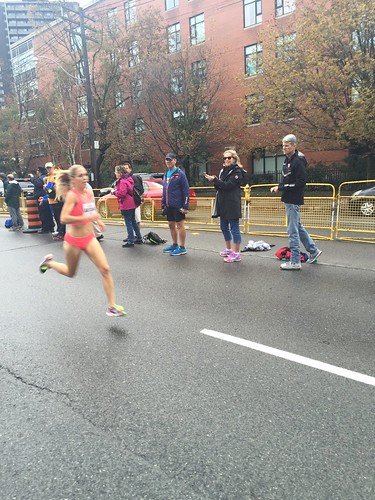 Natasha Wodak heading to the finish line. She’s in airborne in every picture that I took of her! 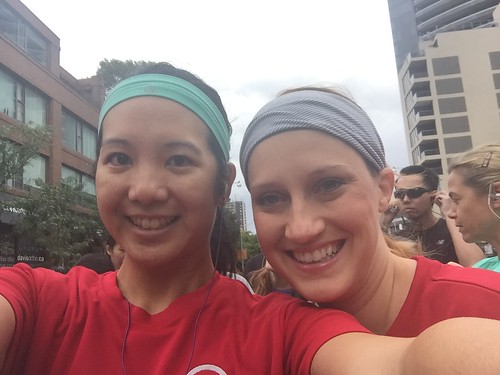 We had to take a selfie when we met!

When the championship finished I made my way to the race tent area located at Jesse Ketchum Public School. I met up with Allison and finally met her in person. It was cool to meet her in real life. We made a pit stop in the washroom and then lined up at the start line. It was Allison’s first 5k race, so I was really excited for her.

The race started and it was a little over a minute before we crossed the timing mats. The first part of the race was fast and downhill, but I wasn’t able to take full advantage of it since we started in the back. I found myself running around people and straddling the line between the race and traffic (the roads were only partially closed to traffic due to the smaller size of the race). We turned onto Dundas Street and the race opened up a little. I was still dodging people but we weren’t as tightly packed as before. We turned onto University Avenue and I was making good time until the fourth kilometre. I’m not a 5k runner and find 5k races really challenging. I’d rather run a half marathon any day. For a moment I gave up a little during the fourth kilometre. I told myself that this was a speed work training run for my marathon and to take a little break. It was windy and we were going up a small incline so I tucked behind people a little bit slower than myself. This was the slowest kilometre in my race and well below my 5k race pace. After that I gave my head a little shake and picked it up for the last kilometre. When we rounded the bend and I could see the finish line I sprinted as fast as I could. I was sprinting so fast (for me) that I felt like I was going to throw up and/or collapse right in front of the finish line. I didn’t want to give up though and I finished strong with a time of 27:05. It wasn’t a PB but I was mostly happy with it. I had plenty left in the tank when I crossed and I knew I could have raced harder, especially during the fourth kilometre. Despite all of this, at some point during the race I ran a new personal best time for the mile! This was a happy surprise, especially given that my last PB was set at an actual one mile race in January. I also reminded myself that when I ran this race in 2012 I finished in 29:35. I’ve come a long way.

Approaching the finish at the Yorkville 5k.

Sprinting to the finish.

After finishing I grabbed some water and then turned to watch Allison and her husband finish. Her goal was to finish in under 30 minutes and she did it! I was very excited for them, especially since she hadn’t run/trained for a few weeks. We got our finisher’s medals, which were huge! Dan met me at the finish and he was upset that he had somehow missed seeing me cross. I joked that he missed me because I was running so fast.

Allison and I with our water after the finish. 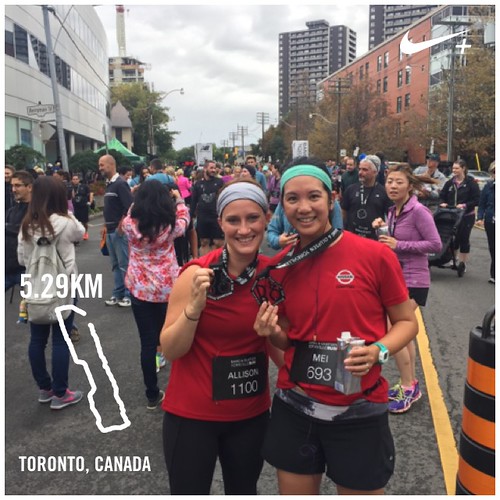 Success! With our finisher’s medals. 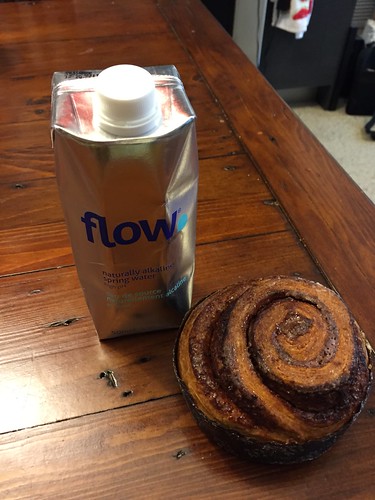 I saved my cinnamon bun for later. It was honestly the size of my head. They also gave out fancy looking water that tasted really flat.

Afterwards, we made our way back to Jesse Ketchum Public School where we were treated with many post-race goodies. They had plates and cups of fresh food, massages, people dressed in tuxedo t-shirts carrying trays of food including cinnamon buns the size of my head and so much more. I got a falafel wrap and some cookies and then we had to go. We said goodbye to Allison and her husband (for now) and then headed off. Overall it was a fun race and the race itself raced more than $250,000 for charity with more than $115,000 for the YWCA Toronto. With the support of family and friends, I raised $265 for YWCA Toronto. $250 will provide welcome baskets for ten women coming in off the street at YWCA Toronto 1st Stop Woodlawn Shelter, which contain essentials such as soap, toothpaste, clothing and feminine products. I was proud to contribute (thank you again to family and friends for their support!).

After the race, Dan and I headed down to King Street and Blue Jays Way where we met up with other runners participating in Run TO Beer. This Run TO Beer event was held in partnership with STWM and had three distances, 3k, 5k and 10k. There’s a designated meeting time and place for each distance and the routes all intersect, meaning that the 10k runners pick up the 5k runners along the route and then the 3k runners eventually join everybody too. Because of the timing of the distances after the Yorkville Run we opted for the 3k option. A stretch of King Street was closed for the Toronto International Film Festival (TIFF) and we wondered if they would move the route from King Street to Wellington Street (the answer is no). Another STWM Digital Champion was there and we laughed at our semi-matching outfits (same running backpack, same black race tee and same STWM Ciel hat). Soon we were joined by the rest of the Run TO Beer runners and we got to run through TIFF. With about 100 runners, it was actually a lot of fun and people even moved out of the way for us! 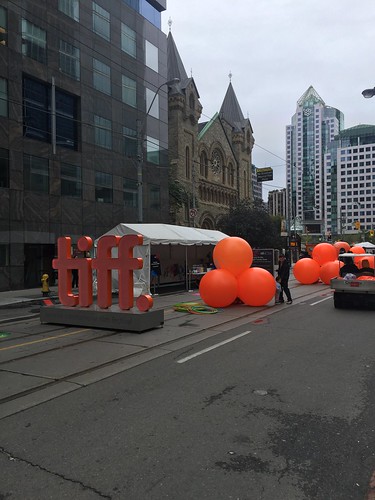 We got to run through TIFF! Probably one of the highlights of my day. 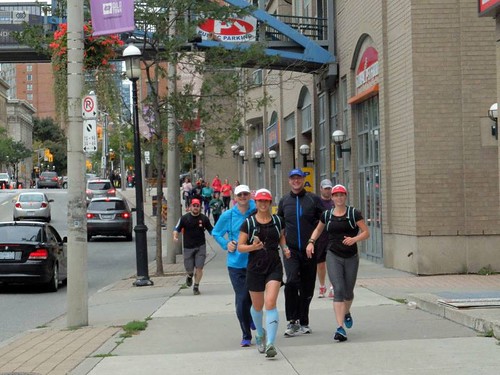 Getting closer to the brewery. Danielle and I accidentally wore matching outfits. Photo courtesy of Run TO Beer. 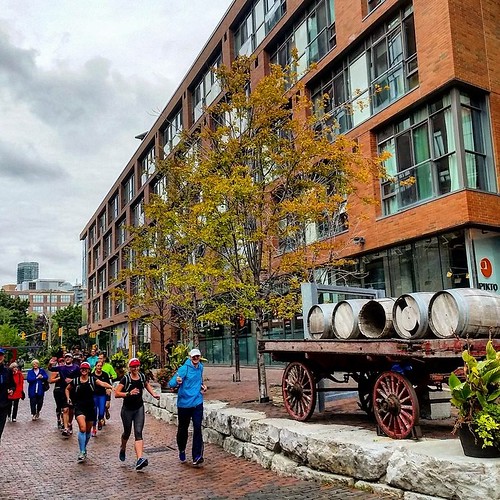 Even closer to the brewery! Photo courtesy of Run TO Beer. 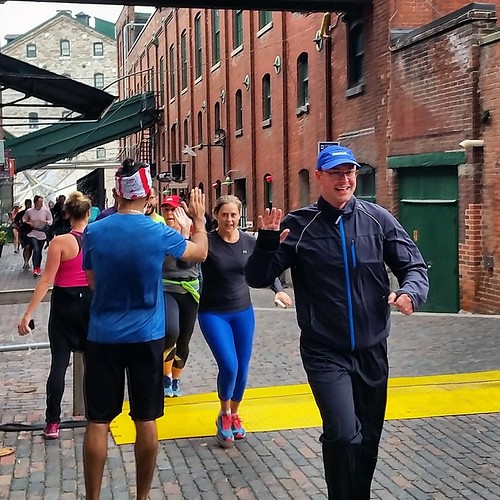 The race route ended at Millstreet Brew Pub where we were greeted by the friendly Canada Running Series staff. We took some pictures and then enjoyed some free beer. As always, it was a pleasure to see the Run TO Beer organizers and Canada Running Series staff. I can only imagine the amount of co-ordination it takes to put on free events like this and we definitely enjoyed it! 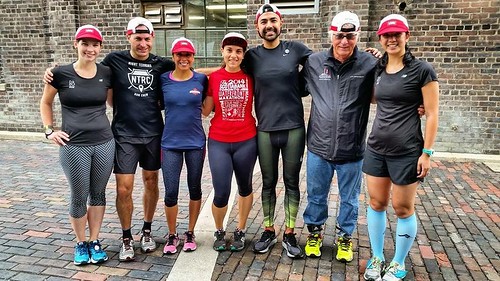 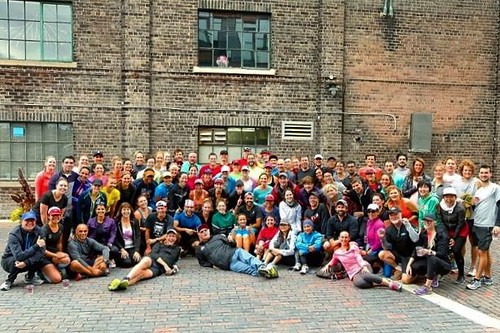 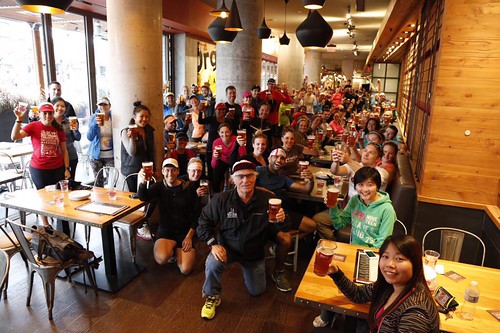 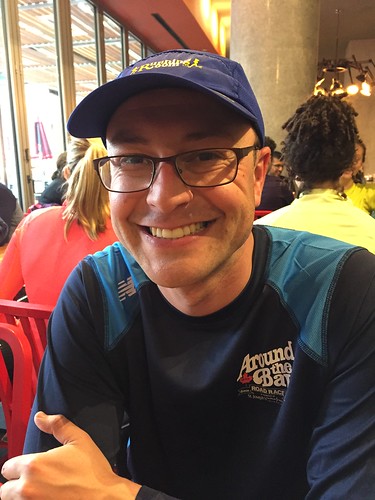 Dan enjoyed his run. Since he doesn’t drink I got his beer. 🙂

In total I ran about 13k that day. Although this is far below the 26k that was on my training plan, I know that it won’t make or break my marathon. It was a fun day and I would do it again in a heartbeat. 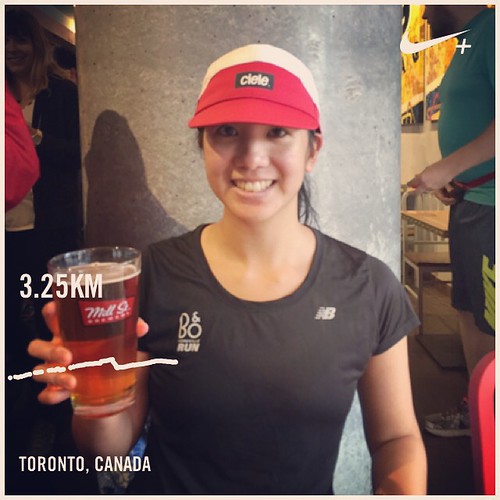 With my beer. Cheers!