One of the things that I’m going to try to do during this training cycle is blog more about how my marathon training is coming along. I started training for my second full marathon, the Scotiabank Toronto Waterfront Marathon (STWM) during the week of June 14. Here’s a breakdown on how my first two weeks went. 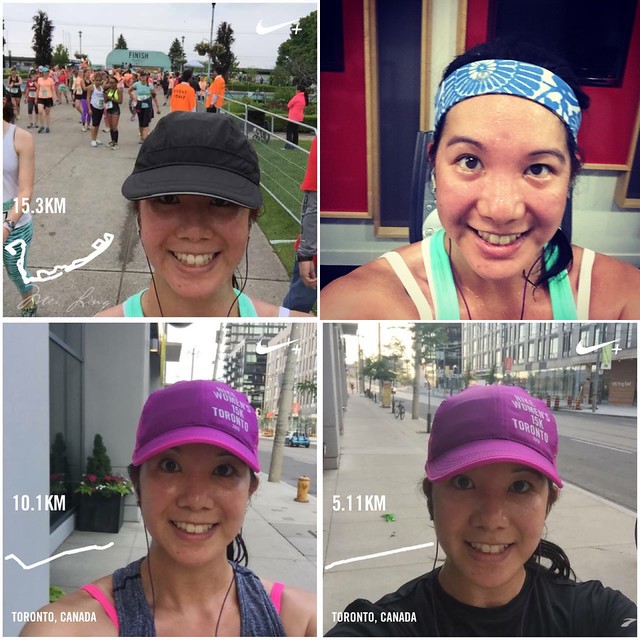 Sunday – 15k: Since I couldn’t go at full race pace due to putting myself in the wrong wave/bottlenecking on the narrow paths, I used the Nike Women’s 15k race in Toronto as a training run.

Tuesday – 5k tempo: It was raining hard so I ended up doing my tempo run on the treadmill.

Wednesday – 10k tempo: I ran to The Beaches and back. The weather was perfect; just warm enough to wear shorts but not too hot yet. I’m going to enjoy this while it lasts.

Thursday – 5k steady run: I did my 5k recovery run the next morning before heading to work. I love the peacefulness of the city during early morning runs. There’s nobody out there except for streetcars and other runners.

I skipped my run on Saturday and decided to take a break. Total kilometres for Week 1 were 35. Not a bad start.

Sunday – 10k LSD (long slow distance): I slept in and didn’t end up running until midday, which is also the hottest time of the day. I ran on the trails through Cherry Beach. It was 26 C and very hot. There was some sort of white dandelion stuff flying around in Cherry Beach (maybe pollen?). It was beautiful from afar and almost looked like snow. The beauty soon turned to annoyance as it stuck all over my sweaty body and went up my nose. I also noticed that my right quad was feeling a little strained. I made sure to stretch well and foam roll it when I got home. 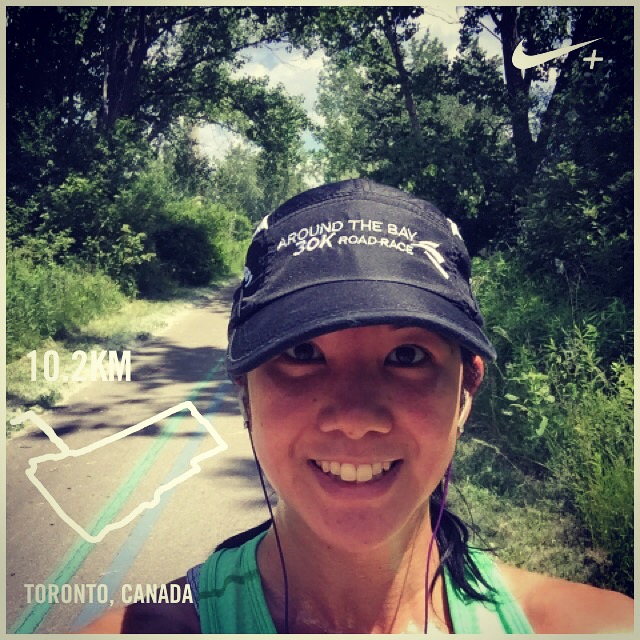 Runfie in Cherry Beach during my 10k long run. It was so hot!

Tuesday and Wednesday – I skipped my planned runs and took rest days on both days. My right quad was feeling tight and a little funny when I walked so I didn’t want to push it. I spent most of the week stretching and foam rolling.

Thursday – 8k steady run: Thursday was my first night with my marathon training clinic at The Running Room. I trained with a clinic for my first marathon in 2013 and recently trained with a half clinic over the winter. I’ve had great results both times (the half clinic got me through the winter and I attribute their support to finally conquering Around the Bay in March). We have about 20 people in our clinic with a good mix of veteran marathoners and first-timers. Now that I’ve been running out of The Running Room in the Beaches for a while there were also a lot of familiar faces. It’s nice to go somewhere where you feel comfortable and supported. Our first run together went well. I let all of the fast people go (by now I know who to just let go!) and ended up running between groups. This is typical for me and I had a good run. We actually ended up running closer to 9k, but who’s counting right? 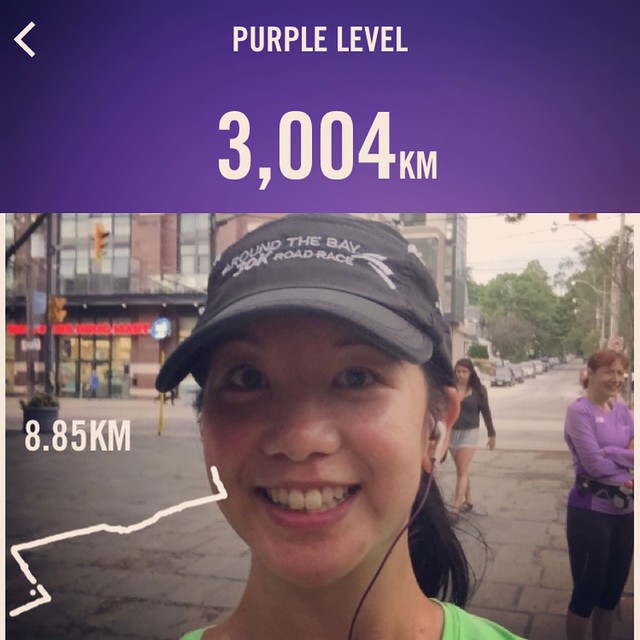 I hit the 3,000 km mark on my Nike+ app during my training run on Thursday. I couldn’t believe it.

Saturday – 6k steady run: Dan joined me for part of my run on Saturday. We went in the morning and the clouds looked ominously grey. Dan is recovering from a recent sprain so he ran the first 2k with me and then he walked while I ran another kilometre before turning around. Then he ran another kilometre with me before walking. I’m going to enjoy being faster than him for a little while longer (usually he is way ahead of me!). It rained when we got back so I was happy to beat the rain. 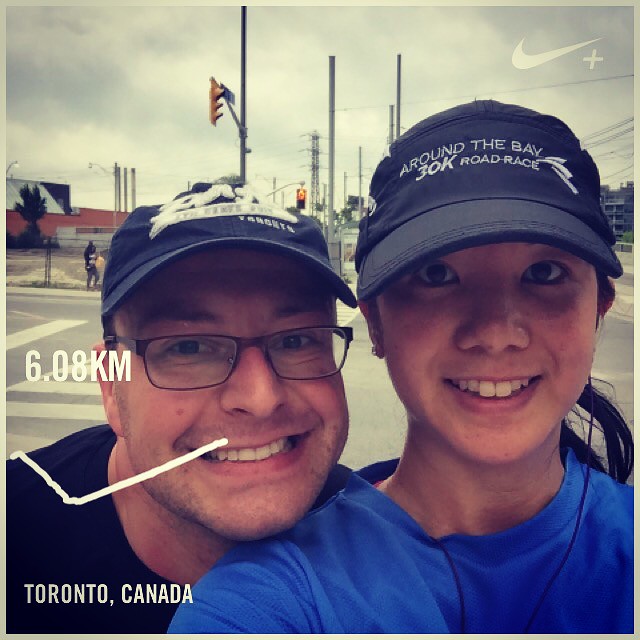 Dan joined me for my training run on Saturday morning. Hopefully his ankle heals and he can join me for more!

My quad is still a little tight but feeling better. Hopefully it’s nothing serious and I can get back to my usual training schedule next week. I’m going to try to work some more cross training in (hopefully yoga and some weight training) and continue to post about how it’s all coming along. Weeks 1 and 2 down! 16 weeks to go until the marathon.