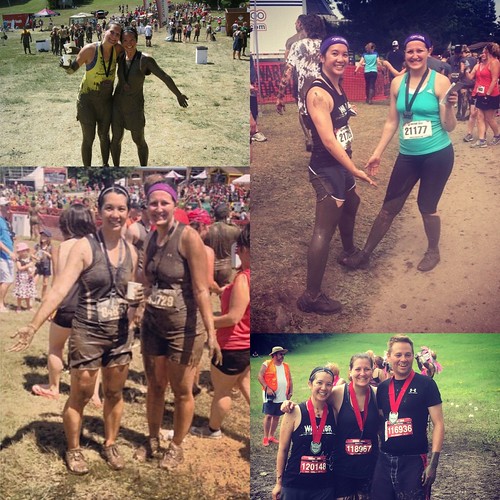 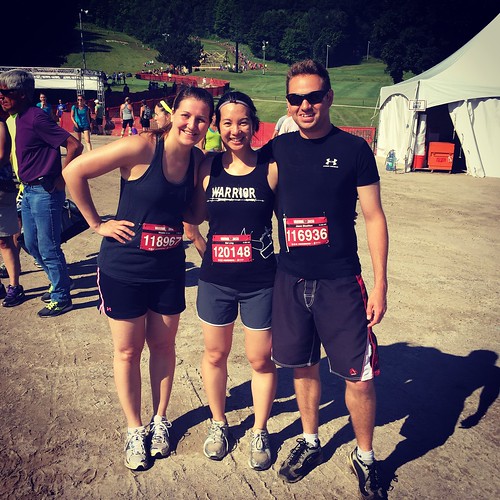 Nicola, me and Jay before the race.

This year our friend Jay joined us as well. Steph (who I ran the Race for Health with) was going to join us too but had to back out due to a bout with the stomach flu. As usual, we carpooled to Horseshoe where we found parking in a designated cornfield. They changed the cornfield this year so instead of shuttle buses we were able to walk directly to the race site. This involved walking down the hill that Nicola and I had run up in a previous race. It was fun to point this out to the others and tease Jay about getting off easy. As always, packet pick up was well organized and I had no problem picking up Steph’s t-shirt and Viking helmet in addition to my own. After a quick warm up, we got into the next wave and then we were off.

One of the differences this year was that it was less muddy. In previous years there was always a section of mud that we had to run through really quickly or risk losing our shoes. This was cut out this year. I didn’t really miss it either!

After a short run (with the usual hills and trails) we hit the first obstacle. It was one where you had to climb over walls and jump down the other side and then crawl under barbed wire. It was a good warm up.

The toughest obstacle for me was one that we had to climb up and then crawl across slats that were about a foot apart from each other. It was dizzying to look down and think that I could fall so I just kept moving before I could think too much about it. Nicola also talked me through it.

Jay set the pace for most of the course by running up the hills. Because he ran the hills I ran them too and then we would wait for Nicola at the top. It was hot and I was dripping with sweat but that was balanced by the shady course. I used the course as a chance to do some hill training as part of my marathon training.

There was a lot of climbing and crawling and barbed wire. My shirt got caught in the wire a few times but it was easy to get unhooked. They still didn’t have water until the two mile mark and I haven’t figured out how to carry water and do the obstacles yet. Maybe next year I’ll get it.

The water station was exciting because Jay ran ahead while I waited for Nicola. We then got stuck behind a group of walkers on a single file section of the trail. When we got to the other side there was Jay waiting for us with water. I heard some girls say “why do they get water?!” before realizing that the water station was right there.

They had free race pictures again this year (which I love! Thank you Warrior Dash!). We didn’t get as many this year because I think we were on the opposite side from the cameras. Oh well. 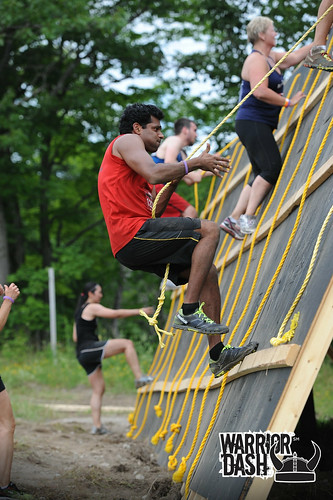 You can see me in the background of this picture.

I ran up the last major hill before the last set of obstacles and as I went somebody yelled “That’s how you get calves like that!” And pointed at my legs. I was so proud! (I do have giant quads and calves from all of the running I do!) Dan and Lindsay saw us climb the last cargo net, do the fire jump and crawl through the mud pit so they get a few pictures of us. 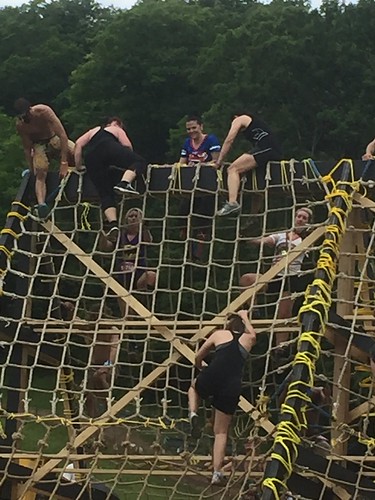 Nicola and I climbing over the final cargo net. 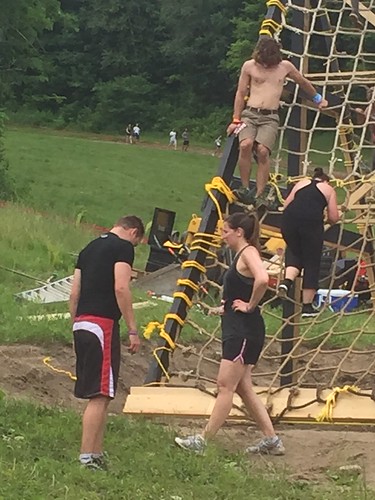 Jay and Nicola waiting for me at the bottom of the cargo net. 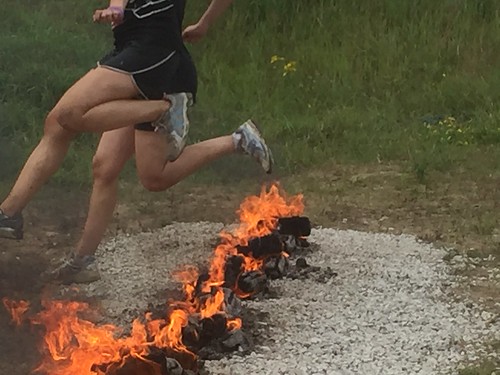 Dan couldn’t see when he was taking our picture so he just got our legs going over the fire!

It was bright out so Dan couldn’t really see what he was taking pictures of. I’m also proud that this year I finally conquered my fear and jumped over the fire (without falling)! This is the first time that I’ve done the fire jump since I fell in 2013. It was a good feeling to finally complete it incident free. 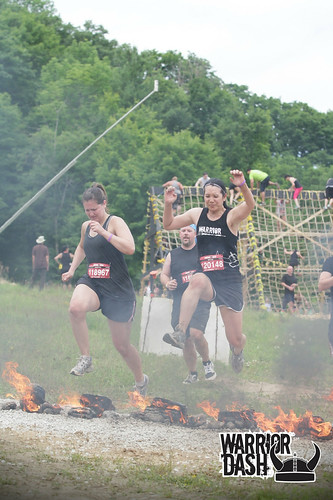 Nicola and I leaping over the fire! Jay was right behind us. 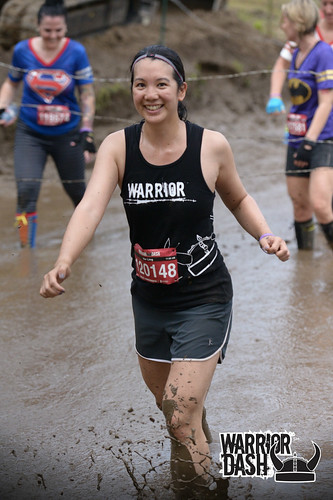 Me splashing through the final mud pit. I got my shirt caught on one last piece of barbed wire.

After the race, we collected our medals, took a few pictures (once again Dan refused to hug me. I’m not sure why;) and got washed up at the firefighter station. I donated my well loved Asics Gel Kayanos that I have had since my ultimate frisbee playing days in 2010. 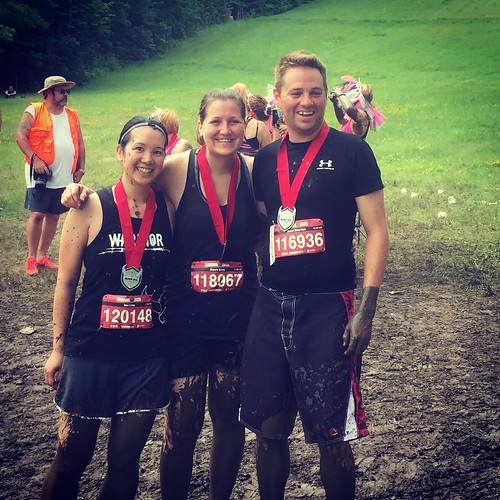 Success! Our after picture. 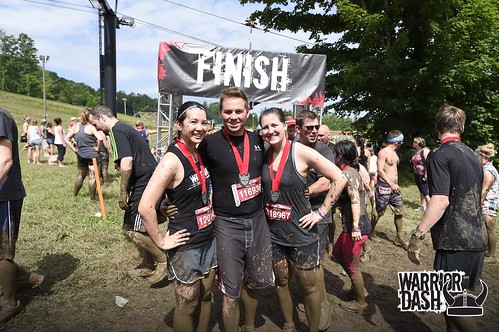 Our official race pic. We are warriors! 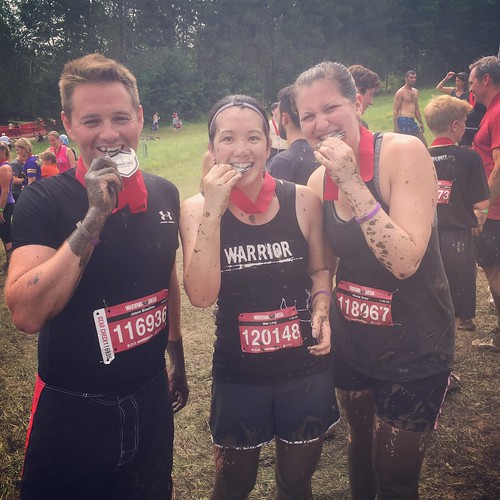 Love our medals. This year they doubled as magnets. 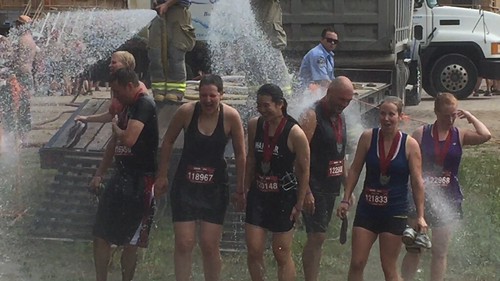 The firefighters cleaned us up. The water was cold but refreshing in the heat. 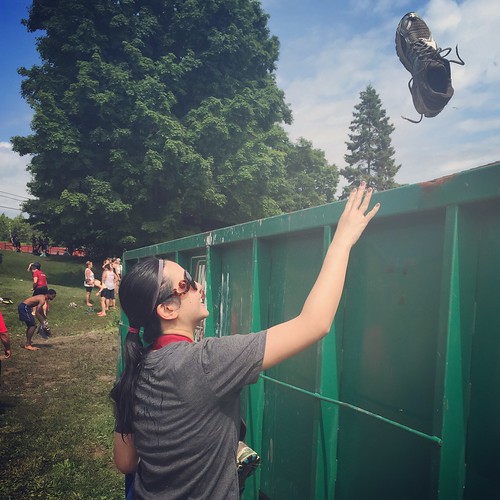 Action shot of me donating my shoes. 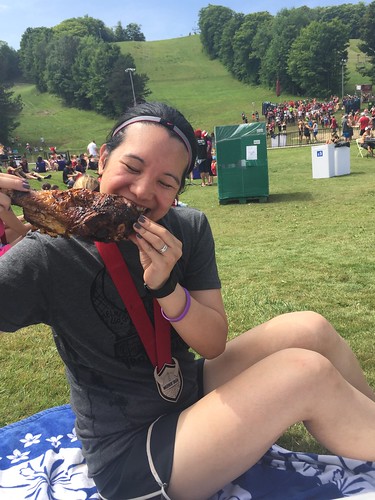 Enjoying a turkey leg after the race.

Then we got our free beer (it was Coors Light instead of the Shock Top beer that was advertised, which was a bit of a bummer for me. I guess free beer is still better than no free beer though!). We also indulged in the delicious turkey legs and lay around in the sun enjoying the live entertainment. 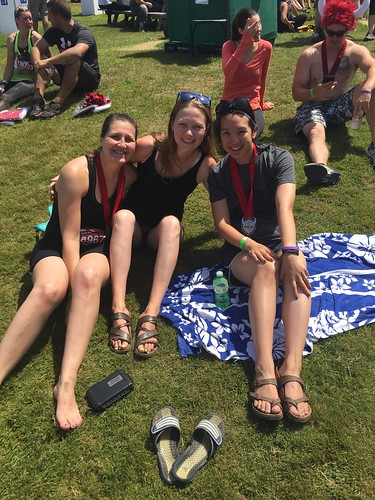 Nicola, Lindsay and I relaxing in the sun. 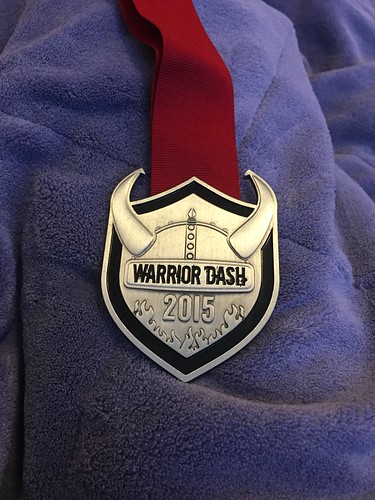 Final look at this year’s medal.

It was a good day overall and another successful Warrior Dash. Can’t wait to run it again next year!

One thought on “That’s how you get calves like that! – Warrior Dash, 2015 Race Recap”