Last year, I had my heart set on running the Nike Women’s Half Marathon in D.C. Unfortunately I was unsuccessful in getting a spot through their lottery system and they cancelled the race this year. I was thrilled when they announced that they were replacing it with a 15k race in Toronto! 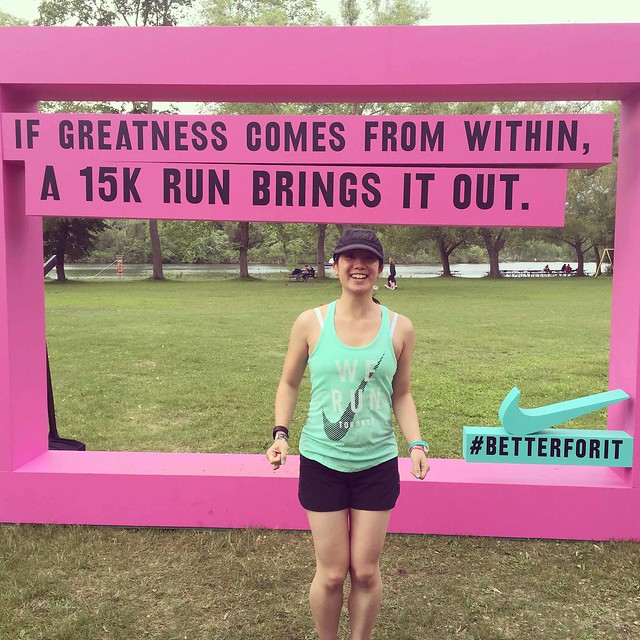 Dan missed the picture of me jumping and got this instead! Nike had a few of these signs that you could take your picture with.

I picked up my race kit at early packet pick up, which was easy and seamless. I also bought a tank top because I wanted something that said Toronto on it. It’s not every day that you can buy Nike race gear with your city’s name emblazoned on it. 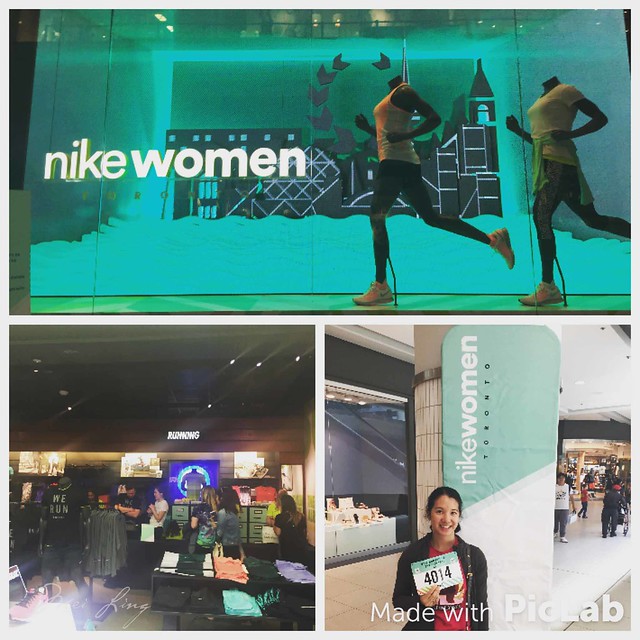 Early packet pick up was really easy. I picked up my race kit from the Nike Running Store at the Eaton Centre. 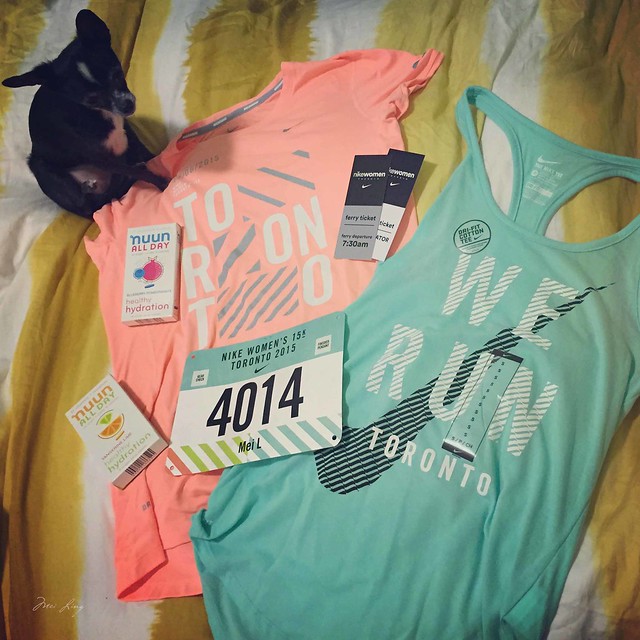 My race kit included a Nike dri-fit shirt (I got a size medium and it fits well. Not too loose or too tight), two boxes of Nuun, my ferry ticket and my prepurchased spectator ticket. I also bought a We Run Toronto tank top with Nike Women’s 15k written on the back. Daisy was really curious about my race kit.

The race took place on the Toronto Islands, which means you need to take a ferry to get there. To account for the crowds Nike gave you a ticket and a specific ferry time based on your corral. I was in the 5th wave so my ferry time was 7:30 a.m. The first wave of runners had ferry tickets for 6 a.m. and their race start wasn’t until 9 a.m. We all had to be there at least half an hour before our ferry time, which meant that people coming in from outside the city had to get up really early. I felt bad for them and thought that for once being a slower runner had its benefits (more sleep!). 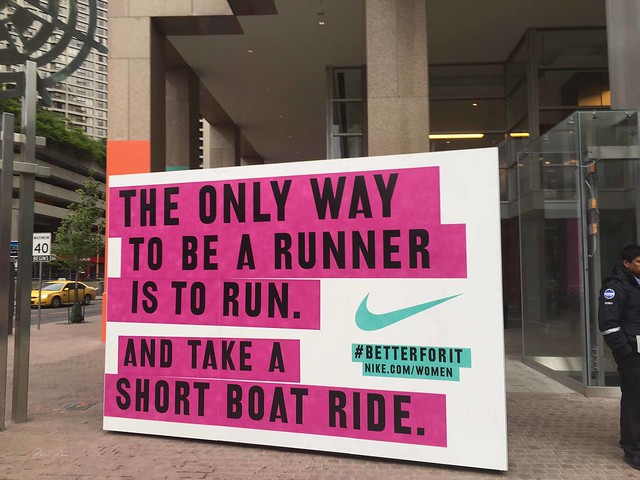 I saw this sign as I was headed to the ferry.

We got to the ferry half an hour early and I got onto the next available ferry, while Dan, who had a spectator ticket, got onto the one after mine. The ferries were really well organized and I was impressed.

Once we got onto the island we went in search of coffee. There were drummers from 416 Beats drumming (they were also on the course later, which was awesome) and a number of food trucks where we could buy food. We bought some sandwiches from Gourmet Bitches and got some free coffee. 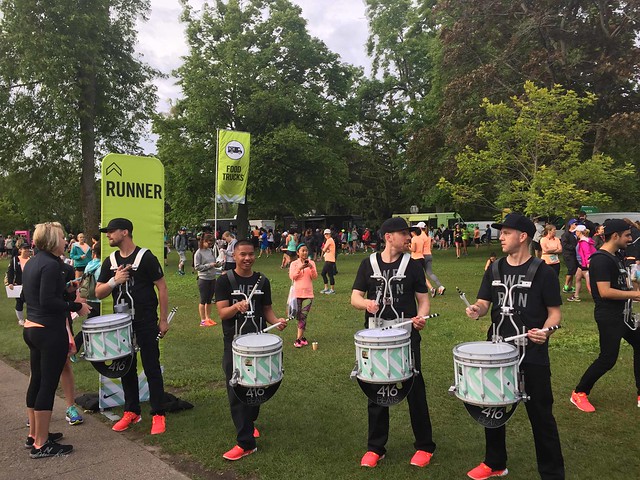 416 Beats entertaining the runners and spectators. They were also along the race course. 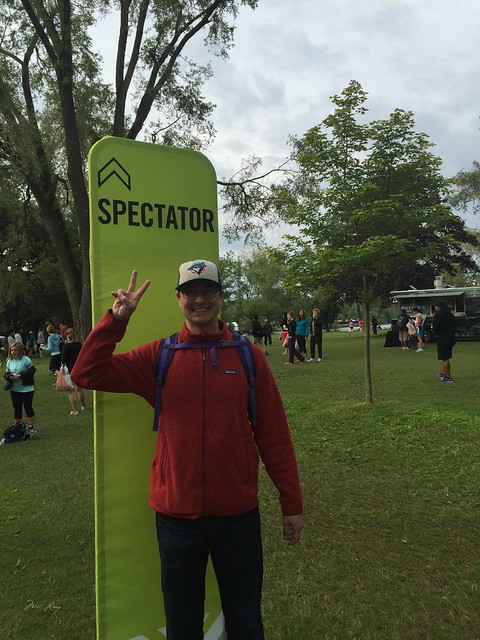 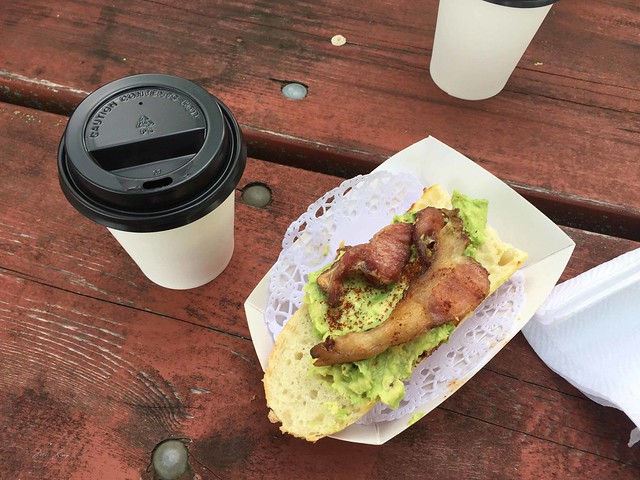 My snack from Gourmet Bitches. It was avocado and bacon on toast and it was delicious! The free coffee wasn’t too bad either.

We still had some time to kill afterwards so we lined up and I took my picture with one of the signs. As we were heading to the race start I started to get cold. It was originally supposed to be hot and humid but now looked like it was going to rain. Nike was giving out heat sheets so I went and got one and right after I did it started pouring rain. 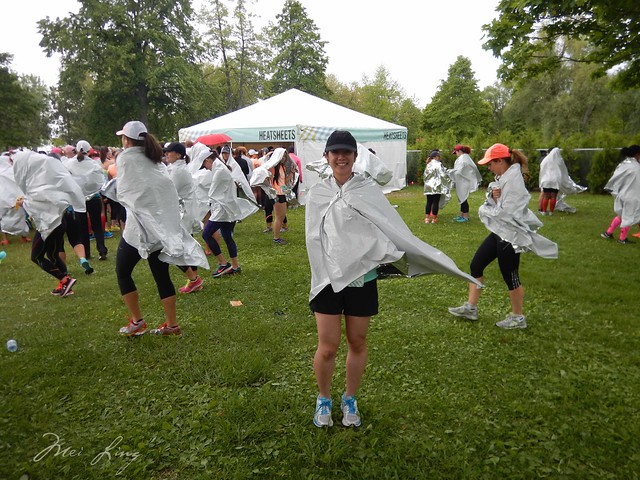 Wrapped in heat sheets to keep dry from the rain! I was so happy that Nike gave this out before the race too.

I thought it was nice of Nike to offer heat sheets to runners before and after the race, especially given the weather. It rained so hard that I put my running rain jacket on and huddled under my heat sheet. Fortunately for me, it stopped raining just as wave 5 was about to go. I spotted Dan and handed him my jacket and then lined back up in my corral. Then we were off!

The first few kilometres were a little frustrating for me. There were 10,000 people running the race and the island paths are narrow for the number of people (probably only enough to allow 3 or 4 people abreast). There were also ropes along the sides of the course so I couldn’t get around people. I ran my first kilometre in 6:35, which is slower than my marathon pace and 35 seconds slower than my Around the Bay 30k pace. I thought that I would just wait until the crowd thinned out but it didn’t happen. At one point the path was split in two directions so it was even narrower. I started running on the other side and then back onto my side as runners in the earlier waves ran at me. I decided that since I hadn’t really trained for this race that I should forget about time and just enjoy the experience. Shortly after that I started high fiving other runners and it was awesome.

At about 3k we hit the Tarmac of Billy Bishop Airport. This was by far the highlight of the race. It was amazing to run with airplanes taking off and landing beside us and the incredible view of the city was breathtaking. I loved this part of the race and kept screaming “Wow!” like a crazy person.

The incredible view. How can you not love this?
Photo courtesy of Nike.

Me running on the tarmac. No big deal. Photo courtesy of Nike.

This is my favourite picture from the race. I forgot to mention that Nike also provided free race pics! Photo courtesy of Nike.

The rest of the race was a lot of fun. I had some trouble adjusting to the different terrains (going from pavement to grass to boardwalk) but Nike had noted the terrain changes in their race course map so it wasn’t a surprise.

Another highlight was a choir singing outside of the church. They were really wonderful and it was a nice touch. We also ran past a section with another beautiful view of the city. If I was running with friends that’s a spot I would have stopped at for a picture. After that was about a mile on the boardwalk and then we hit the finish. Dan was also pleased with the Nike runner tracker and he was able to follow me on his iPhone. He told me that he could tell whenever I hit a bottleneck based on the drop in my pace.

The choir singing outside of the church.
Photo courtesy of NIke.

Me about to hit the boardwalk. Photo courtesy of NIke.

In the end I finished in 1:33:05 and I felt like I could have run harder and faster. At Around the Bay I hit the 15k point in 1:29:13 so I was initially hoping to beat that time but gave up on it due to all of the bottlenecks. I was still pleased with my time since it was still a PB for this race distance. Last year when I ran A Midsummer Night’s Run 15k I finished in 1:51:56, so this was a huge improvement!

Right after crossing the finish line. There are no pictures of me actually crossing it because I ran into a pack of people.
Photo courtesy of Nike.

Any finish line that you can walk away from. 🙂
Photo courtesy of Nike. 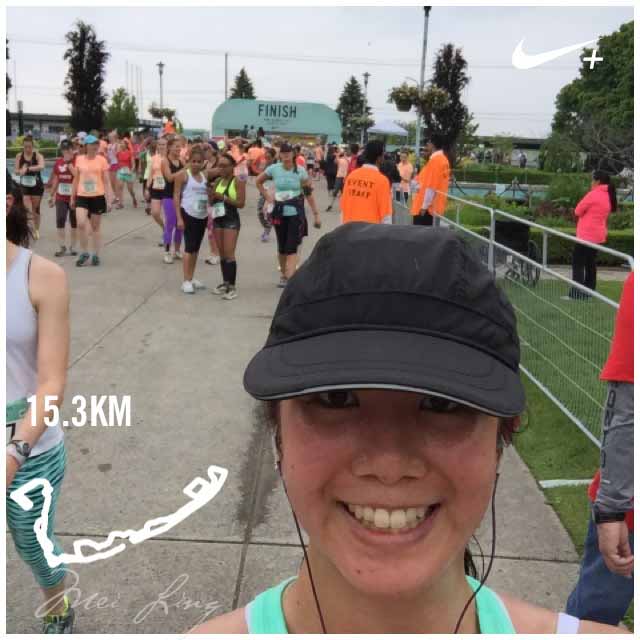 Me at the race finish. As usual I ran with my Nike+ app.

As I finished the race it started raining again. I felt lucky that it hadn’t rained at all during my actual race. I picked up an apple and a goodie bag with food and water from Nike and then went through the finisher’s chute where a handsome man handed me my beautiful blue Tiffany box. I was ecstatic. I saw Dan just outside, took some pictures, got dressed and then we headed to the ferry. 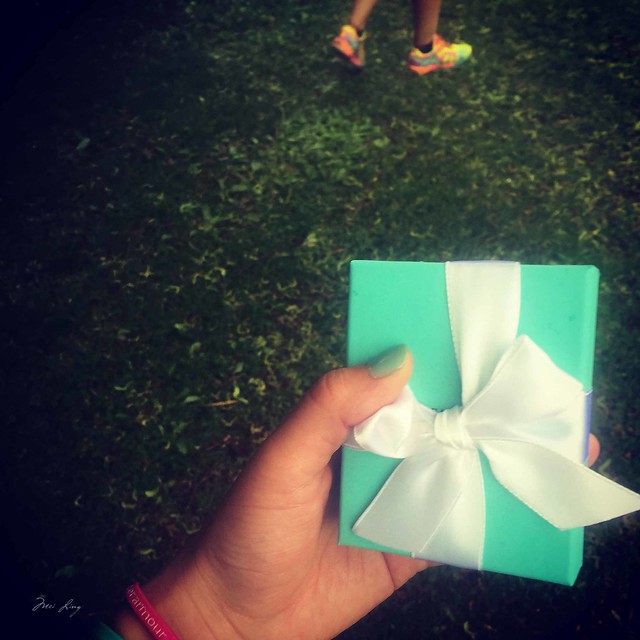 Holding my Tiffany box. Yes, I matched my nail polish to the box on purpose. 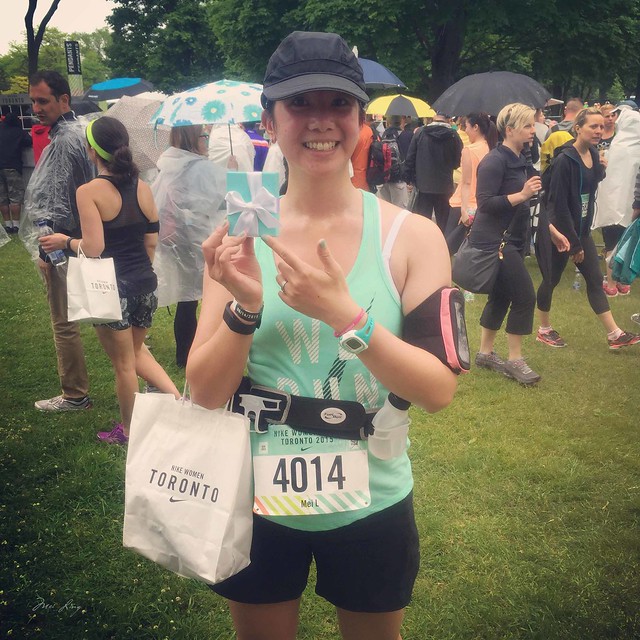 Me with my Tiffany box and bag of goodies.

The main ferry at Centre Island was crowded with a wait time of over 90 minutes. I had been worried about this since I had heard about how disastrous A Midsummer Night’s Run was two years ago when they had to move it to the island. I think the rain also made it worse since less people wanted to stick around after the race and check out the post-race activities. We ended up walking to Ward’s Island (approximately 30 minute walk) and caught the ferry there. It was worth it. When we got back to the city I made Dan go to the expo at Harbourfront with me where I bought a few race finisher’s items. I’ve been wearing them proudly ever since. 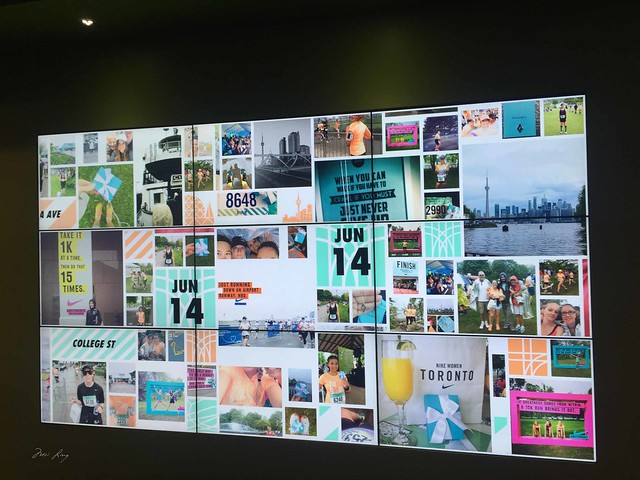 At the expo they had this screen that showed pics that people had taken using the #BetterForIt and #NikeToronto hashtags. 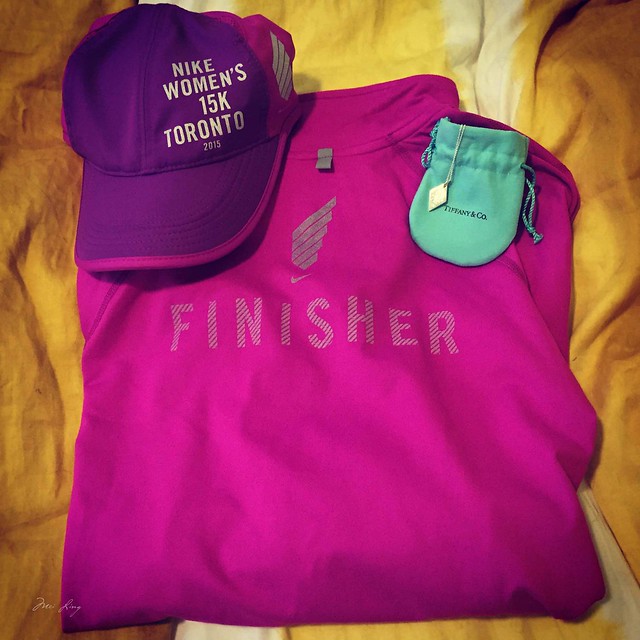 I bought a finisher’s hat and long sleeve 1/2 zip. I love them. 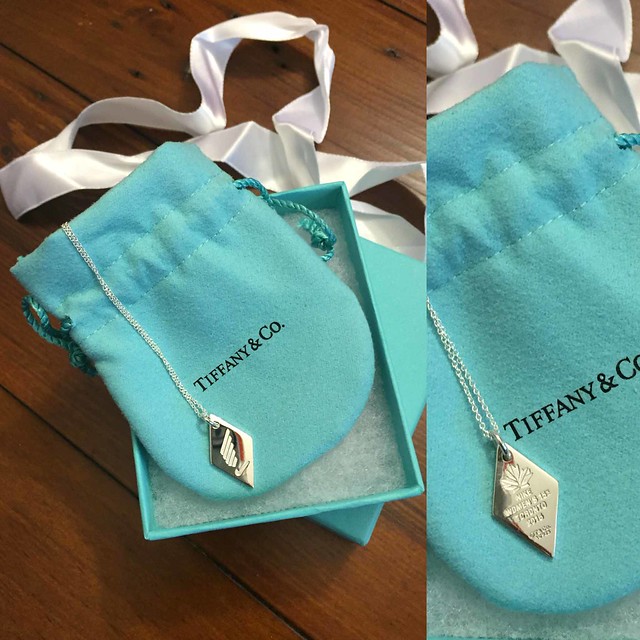 Close up of the Tiffany finisher’s necklace. I love it.

Overall it was a fun, very well organized race with a beautiful course. I would definitely run this again (maybe put myself in an earlier corral and bring some friends with me). Hopefully Nike brings it back to Toronto again next year.