On Sunday I ran the Toronto Women’s Half Marathon for the second year in a row. It was just as much fun as last year, though the heat destroyed me. 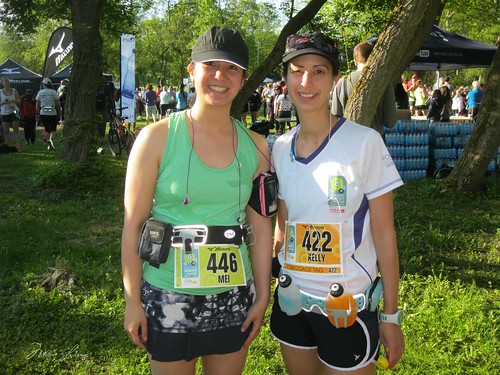 Kelly and I before the race.

Kelly was also running the half and her mom Diane was running the 5k. Sadly, Arlene injured her knee so she wasn’t able to join us. Dan and I got to the race earlier this year, so we didn’t have to rush. The lot where we parked was a 10 minute walk away from the start and finish area, but Dan insisted that it was one lot closer than last year. One of the perks to parking in the farther lot is that there were real bathrooms there and no line. We walked to the start area and found Kelly with about 5 minutes to spare. Kelly was in the orange corral and I was in the green corral but I decided to start the race with her. I start 50% of my races in the wrong corral anyway. Kelly was battling bronchitis and on puffers and antibiotics, so she couldn’t run at her usual pace. Once again I found myself under-trained. I was sick in April and even had a fever for the first time as an adult. It set me back by a few weeks and then things got busy so I had had trouble getting in the training runs that I needed. I decided that I had tried my best and to just enjoy the race and not worry about time. Before we knew it we were off and running. I wished Kelly luck and told her I’d see her at the finish. 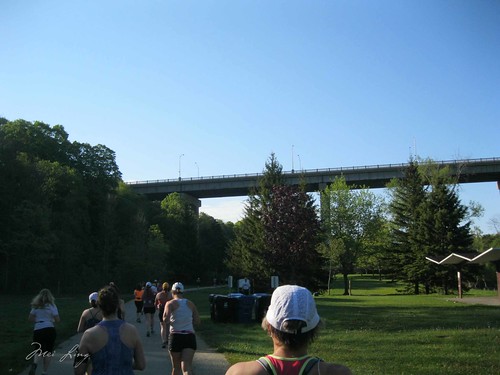 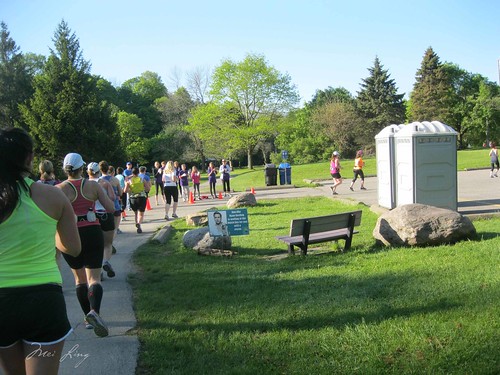 One of my favourite signs from last year was early on the course. Ryan Gosling with a puppy.

I felt pretty good for most of the race. My breathing was nice and relaxed and I kept up a nice easy pace. I enjoyed reading the signs and took lots of pictures. The park wasn’t closed to the public, so there were bike riders, walkers and non-race runners along the way. They were all courteous and understanding about the race and let us pass, so it wasn’t an issue. As with last year, the volunteers were encouraging and energetic. This helps make all the difference in a race. 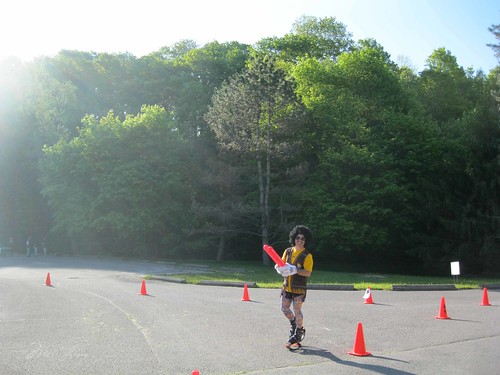 The race volunteers were as motivating as ever! 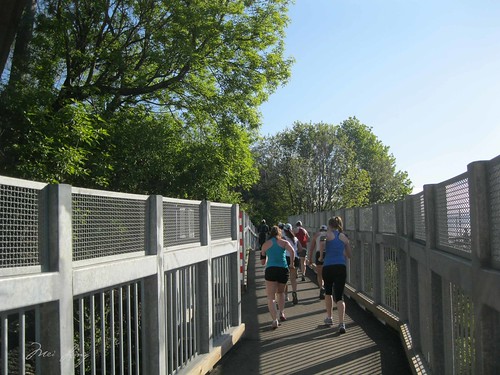 Running across a bridge in the park.

As we continued running it started to get warmer. It had been about 11 celsius when I left for the race that morning. I had heard that it would warm up to 21 celsius by 11 a.m., but less than an hour into the race I was already feeling it. As I mentioned in my recap for last year’s race, there isn’t a lot of shade along the paths. Even though I was wearing a tank top and running skirt, I started to drip with sweat. I should also add that I have poor tolerance to heat due to a brush with heat exhaustion on a road trip through the Australian outback seven years ago (that’s another story for another time). Ever since then I’ve found that heat really affects me and I often have trouble adjusting. It didn’t help that this was my first run of the season in summer like conditions. I was really happy when we hit the first water station (manned by firefighters!) and made sure to take some water and eLoad. 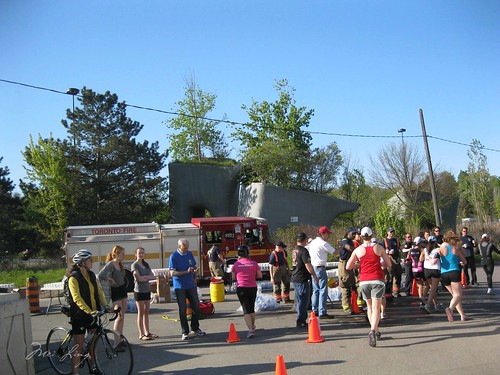 A water station run by firefighters. 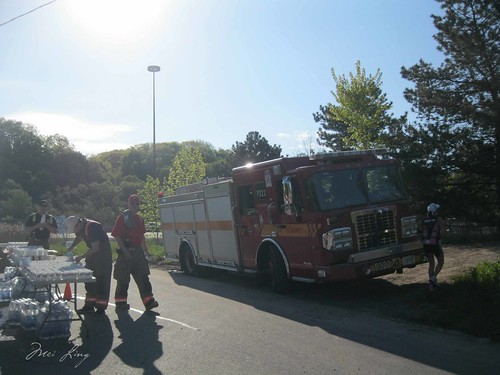 They even brought their fire truck!

Another great improvement for the race this year was the route. Last year they had to add some detours that took you out of the park and along the road due to construction on the trails. This year the construction was all done so we did the entire race in the park, making it really scenic. 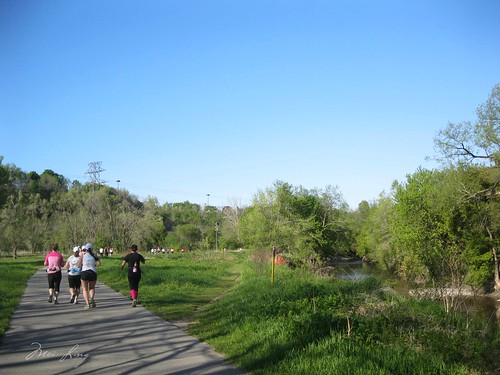 I knew the moment we got into Taylor Creek Park (all of the parks interconnect) because it was a trail that I was familiar with. When we reached the turnaround point in Taylor Creek I briefly thought about how I could just run home from there. During this stretch the leaders ran past me on their way back from the turn around point. They were fast and I cheered for them. As the runners in the first wave passed me I couldn’t help but admire them. They were fit and strong and I felt honoured to be able to run (or plod) on the same trail in the same race as them. They were really inspiring to see. 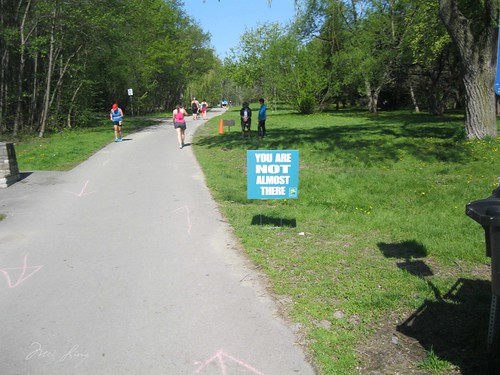 This was one of my favourite signs this year. You are NOT almost there!

On our way back  through the trail I could hear some red winged blackbirds chirping away and I saw a few of them fly by. I had chills at the thought of any of them attacking me (even though my little red-winged blackbird nemesis attacks me on a different trail system). This feeling passed when I stopped seeing or hearing them. We made our way to the other side of Taylor Creek Park. At this point the heat was really affecting me and I was dripping with sweat. I only carried two waters in my fuel belt this year (an improvement from last year where I ran without a fuel belt) but even that didn’t feel like enough. I grabbed a water at the next station and ran to the turnaround point. On the way back I grabbed a water and an eLoad and stopped to drink them. Kelly ran by on her way to the turnaround and we cheered for each other. As with our marathon, it was always nice to see her and know that she was right behind me. 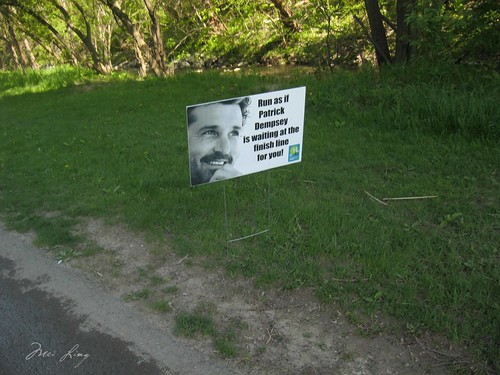 This sign with Dr. McDreamy on it was also a favourite. 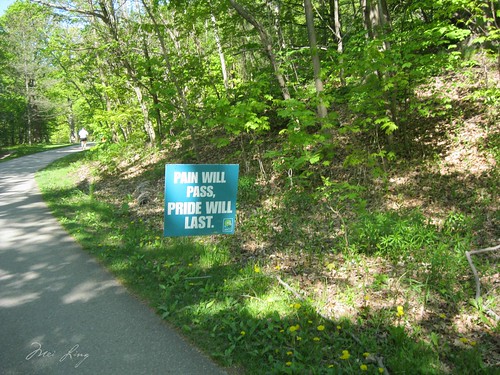 A nice reminder that the pain will be over eventually… I couldn’t wait to earn my necklace!

At 17k I saw a sign that said “Humpy Dumpty had wall issues too.” I thought “If Humpty Dumpty were here he would walk at this point,” so I stopped and walked. My lungs and breathing felt fine, my legs felt fine but I was exhausted from the heat. I felt like I couldn’t get enough fluid into me and it just made me feel so tired. I decided to concentrate on finishing. 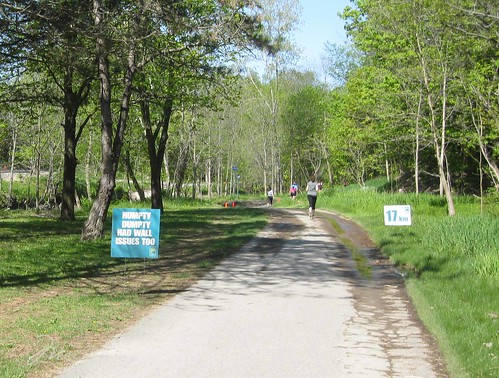 At this point I started to walk. 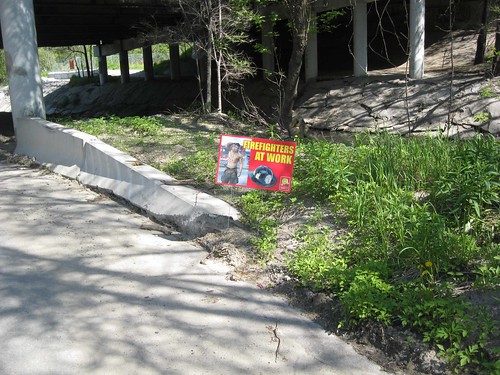 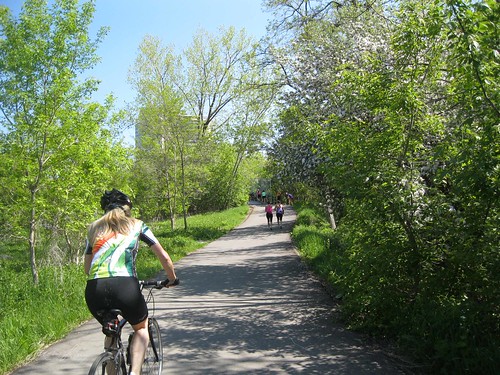 At this point this small incline felt like a giant hill!

There were a lot of people around me who were also walking so I knew they were feeling the effects of the heat too. I ran a little bit but I mostly walked. It got to the point where I only ran if I saw a camera or if there was shade up ahead so I could get to it faster.  I ran through the chocolate station where they were giving out free squares of AWAKE Chocolate. Their chocolate has caffeine in it but I decided not to eat it because I was worried it would melt all over the place. Instead I saved it for later (I should have eaten it then. It probably would have helped give me a boost!). I was kind of excited to see the owl on the packaging because AWAKE Chocolate tweeted a picture of me from last year with the owl wearing  a matching tutu! 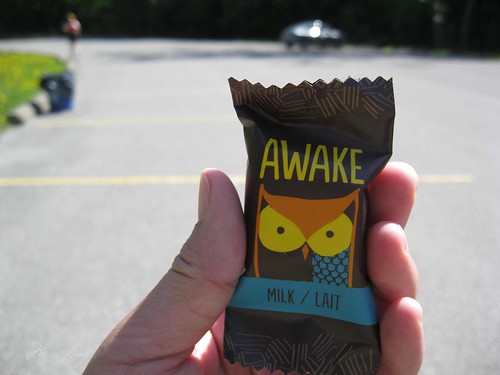 My AWAKE Chocolate during the race. 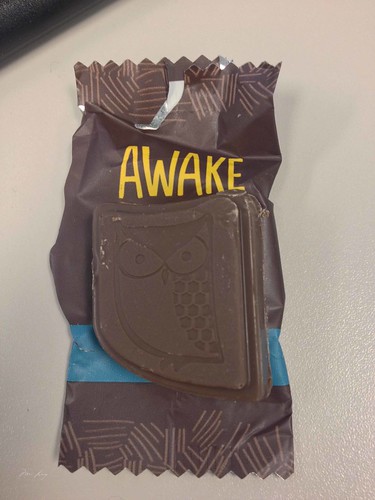 I ate the chocolate today and was pleased to see the owl on it too. The chocolate was pretty good! I couldn’t even tell it had caffeine in it, other than feeling a little bit more awake. 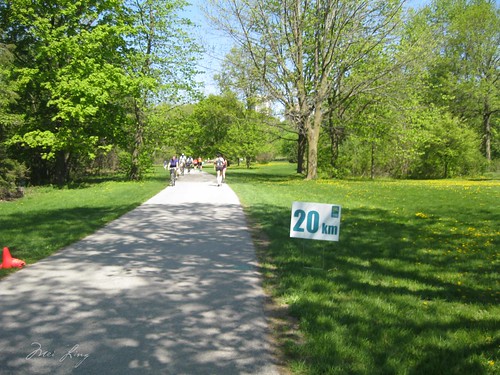 The 20km sign. Last year at this point I jumped awkwardly in the air.

I don’t know the runner beside me but I love how we both acknowledged the camera at the same time.

I saw another runner ahead of me who was also walking suddenly start running with a volunteer. I wasn’t sure what was going on but as I approached I realized that I could see the finish line. I felt pure joy at the thought of the finish line and the volunteers started pumping me up saying “The finish is just around that corner! You can’t miss it! Keep going!” This was enough to get me to start running again. As I got closer I saw Dan waiting for me, along with Kelly’s family and I started to pick up the pace. I was so happy to cross the finish line. I grabbed two waters at the finish and Dan came and found me. He also led me to the table where they were giving out bags of food. These bags were amazing! There were two morning rounds in them, a banana, a caramel AWAKE Chocolate bar and a bag of chips. At that moment to me it felt like the holy grail of food bags. We stood in the shade where I cooled off, put my finisher’s medal on and took some pictures. 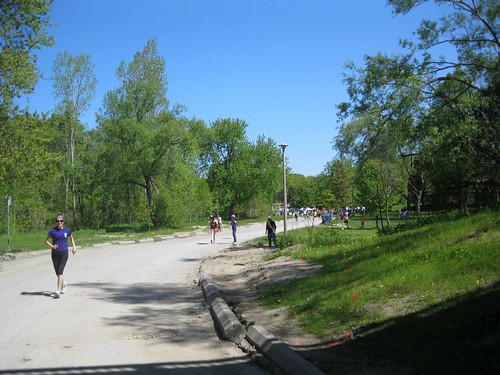 My first glimpse of the finish line. The volunteers were very enthusiastic here. I was overjoyed.

Me approaching the finish line. I was trying to figure out why I was looking to the side in the picture. I saw later that it was because I was looking at Dan!

Running towards the finish line. You can see Dan in the background, which explains why I was looking to the side in the other picture.

I was determined to finish. 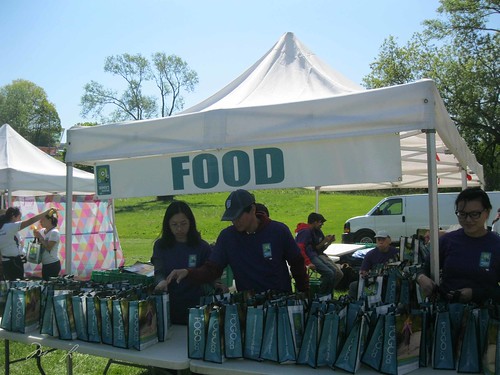 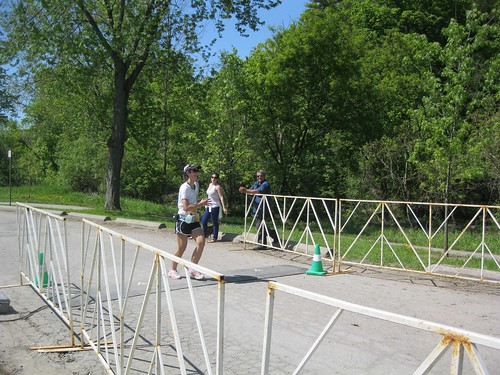 Kelly approaching the finish line. I didn’t get a good picture because I turned my camera on and off again a few times by accident first! 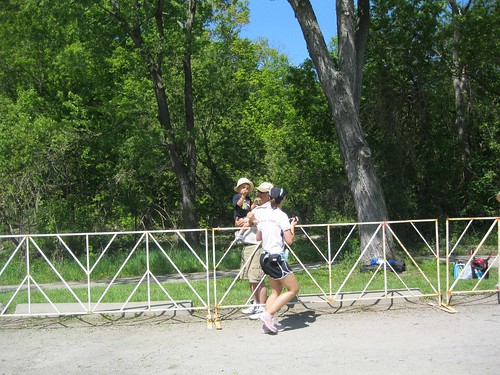 Kelly hugging her son and her dad before finishing the race. 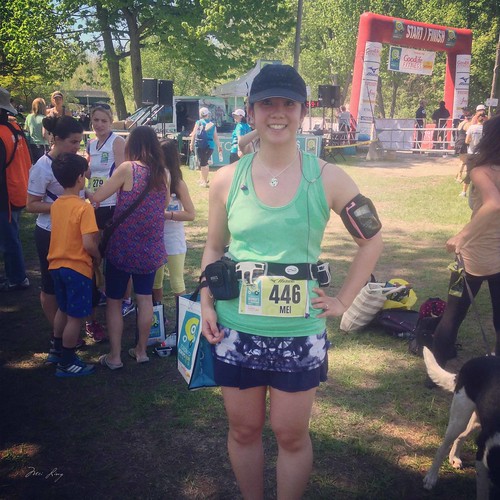 Me by the finish line. Happy to be done running and relaxing in the shade.

We went back to the finish line and sat in the shade to wait for Kelly. We saw her run by and finish and then met up with her and her family again. We were both happy to have finished, though we both agreed that we’re going to train for the next race (the last few races have been somewhat disastrous). 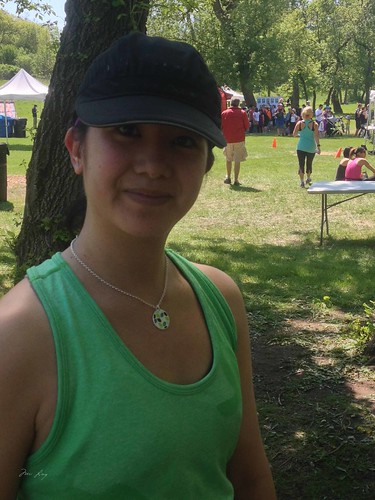 I was so happy to be done. The white spots on my hat are sweat marks from the race! 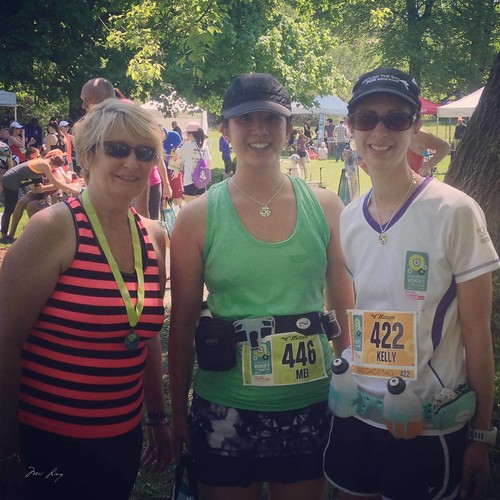 Diane, me and Kelly after the race. We did it! 5k finishers got a very nice medal. Half marathon finishers got a necklace by Foxy Originals (designed and made in Canada).

Despite running a personal worst and feeling the effects of the heat, I still had a good time at the race (the chocolate, the firefighters, the atmosphere, the free race pics and the great volunteers all made up for it). I’m already thinking of what I’ll do to improve the next time I run it (training and carrying two bottles of Gatorade and two bottles of water in my fuel belt are at the top of my list!). I felt like I fought hard to finish this race and I will wear my finisher’s necklace with pride. 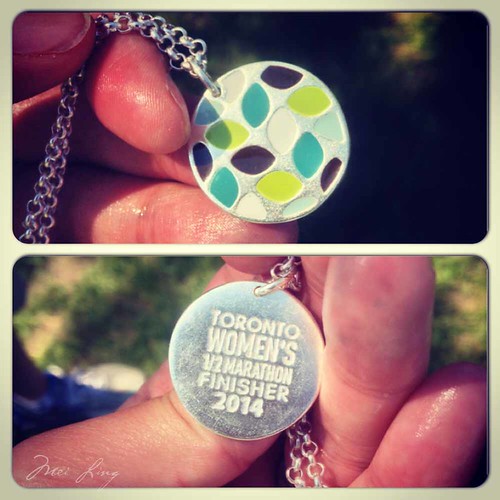 Close up of my hard earned necklace. I like this one more than last year’s.

3 thoughts on “Humpty Dumpty had wall issues too – Toronto Women’s Half, 2014”