Tomorrow I’m running the Toronto Women’s Half Marathon. Before I run it I thought I should recap last year’s race. I actually wrote this post a while ago but never got around to posting it. I hope the race is as much fun as it was last year! 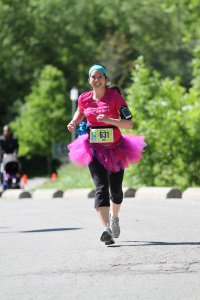 Running the Toronto Women’s Half Marathon. They had free race pics! I got lots of compliments on my tutu.

In May 2013 I ran the Toronto Women’s Half Marathon in Sunnybrook Park. The day was a little bit cooler than I expected so I ended up having to make adjustments to my race outfit. I was also moving very slowly that morning, which resulted in a mad rush to get to the start line on time. Dan ended up having to drop me off on the side of the road because there were so many cars trying to get into the park. Anyway, I still made it in time and that’s all that matters. Now Dan has warned me that we’re not going to be rushing to races like that anymore! We’ll see though.

This race was appealing to me for a number of reasons. It’s a women’s race, so I liked the idea of the camaraderie and all of the small touches that make it for women. For example, the t-shirts are a women’s cut, the water stations are manned by firemen (though despite repeated requests for them to take off their shirts most of them didn’t), there’s chocolate after the race and instead of a medal you get a special finisher’s necklace. Men are also allowed to sign up for the race, though they are asked to let a woman cross the finish line and win first.

The course is challenging in that it has hills and a few out and back sections. Since it’s in a park there isn’t much to look at and there are quite a few areas where there’s no shade, which is obviously not ideal in warmer temperatures.

I started the race out strong and felt pretty good for the first half. When we reached the first hill I ran up it and one of the volunteers who had a funny hat and Mickey Mouse gloves told me how much he loved my tutu and that he would run with me for a bit since we were both dressed up. He ran with me for a minute or so and I asked him if there were more hills. He said there was another big one later on. It was nice to have a volunteer run with me. Overall the volunteers were really supportive. 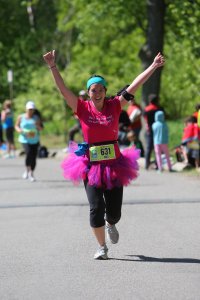 Either I was still feeling strong or I was posing for the camera. I have a tendency to do that.

Halfway through the race I started to slow down. I felt tired and undertrained. The out and backs were playing with me mentally and I started to walk. Somebody ran by and said “Come on tutu girl! Run!” so I laughed and ran for a little before walking again. I felt overheated too because the sun was out again. I decided to let go of any ideas of a PR and just concentrate on finishing.

Since there were free race pics I made the extra effort to pose for the camera. At 20k in I decided it would be a good idea to jump in the air (especially since nobody was around me since I was so slow). As you can see, it was a very awkward looking jump. My landing was also equally awkward and caused my leg to cramp up. I tried to run it off. 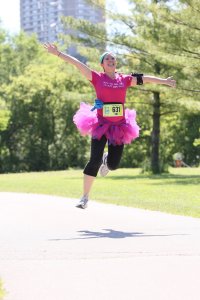 My awkward jump at 20k. Never attempt to jump at 20k or you could look like this.

Another highlight of the race were the fun signs along the way. I especially loved this sign with Ryan Gosling.

Finally I reached the finish where I was awarded with my beautiful half marathon finisher’s necklace by Foxy Originals. After eating some chocolate and drinking some water Dan and I made our way back to the car. I was dismayed to discover that we had to climb a few very large hills to get there (or at the time they seemed large anyway).

Overall I had a great time running the Toronto Women’s Half Marathon. I hope I get a chance to run it again and maybe improve on my time (which honestly wasn’t that great but I was happy to finish!).

Close up of my finisher’s necklace. It was also their five year anniversary!

2 thoughts on “Run like Ryan Gosling is waiting at the finish line for you with a puppy – Toronto Women’s Half, 2013”