We spent our last full day in Taiwan exploring more of Taipei. 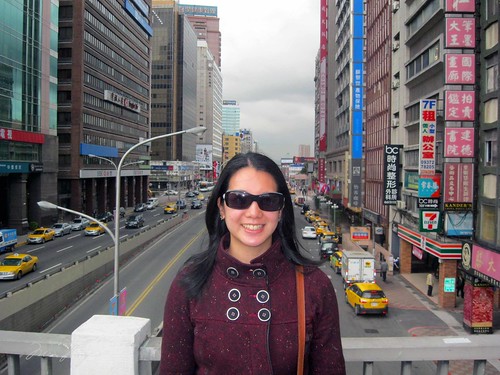 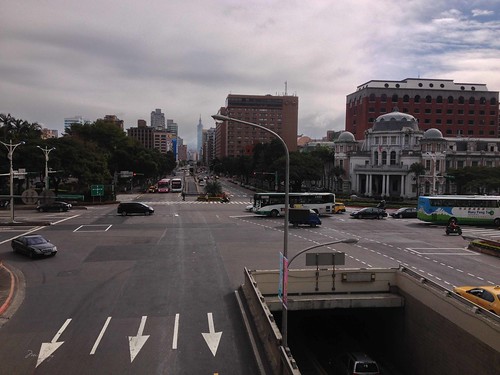 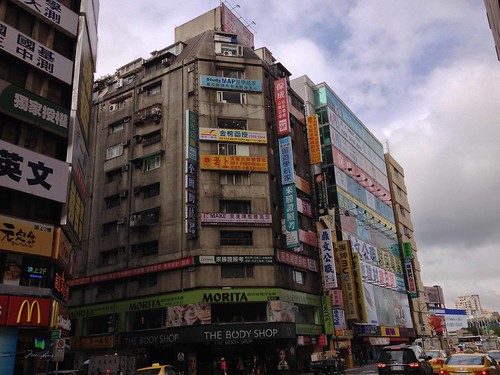 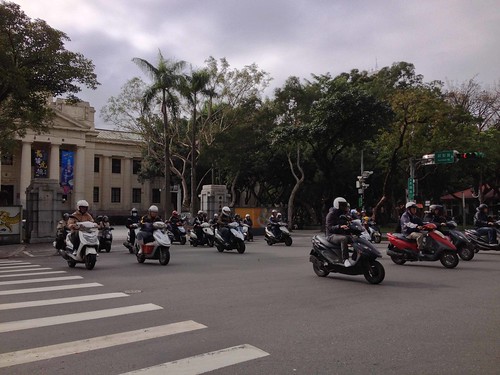 We started the day by taking a nice relaxing walk through 228 Memorial Peace Park, the oldest park in Taipei (known as Taipei Park when it first opened). After World War II when the KMT government took over from the Japanese there was a lot of corruption, which resulted in turmoil and protests. One of the protests took place in what is now 228 Memorial Peace Park in 1947 where people were shot and injured or killed by soldiers. A monument was set up and the park was renamed 228 Memorial Peace Park in honour and remembrance of those who were killed during this terrible time. The park is a beautiful and tranquil place now with little to no hint of its sombre past, other than the plaques. 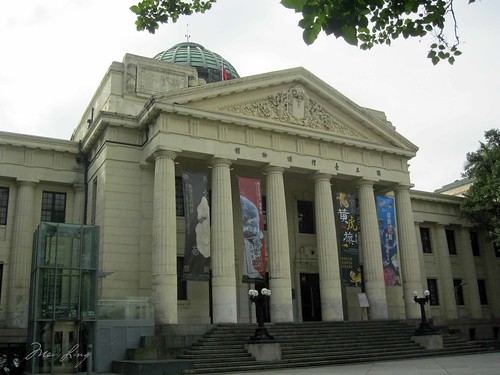 I took a picture of this building because I thought it looked interesting. 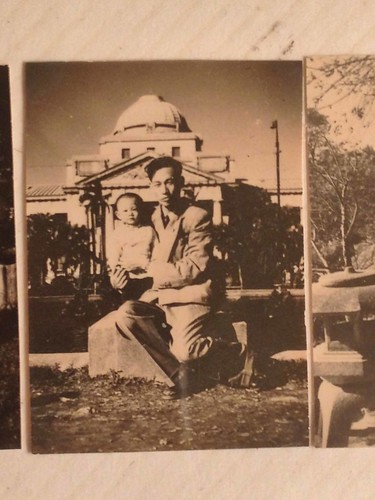 When my dad saw the picture that I took of that building he showed me this picture of my grandpa and him sitting outside of it. My dad was less than a year old. 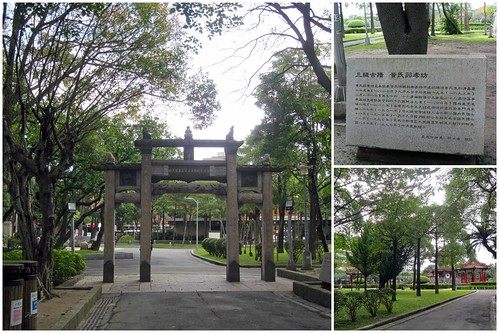 The entrance to 228 Memorial Peace Park. 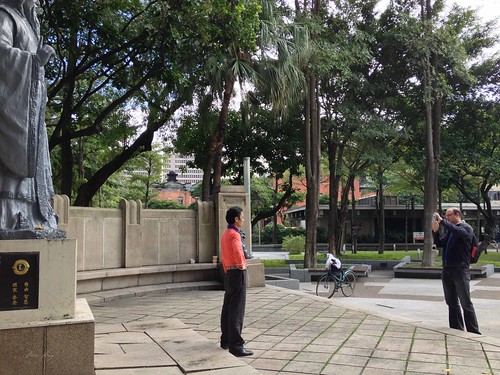 Dan takes a picture of this man with a statue of Confucius. 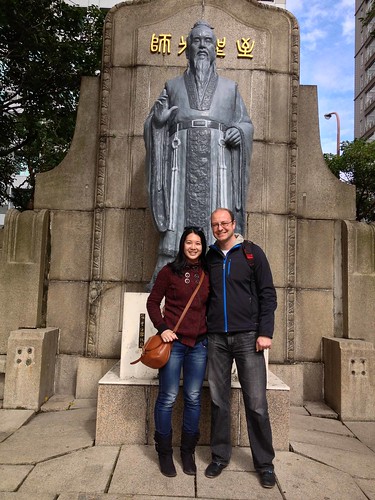 Dan and I in front of the statue of Confucius. 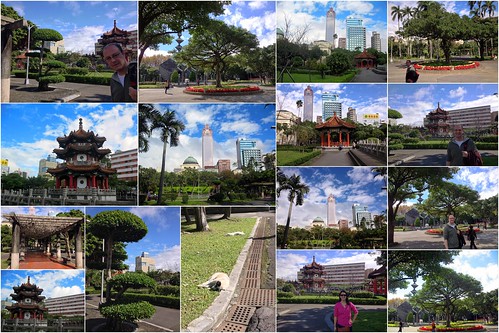 228 Memorial Peace Park. The sun came out for a little bit.

Next we hopped onto the MRT and took the blue line to Taipei City Hall Hall Station. From there we were going to take a shuttle bus to Taipei 101 but after waiting for several minutes and looking on a map to see how far it was, we opted to walk instead. It took about 15-20 minutes to walk. This part of Taipei was very walkable with pedestrian friendly sidewalks and lanes for bicyclists. Finally we reached Taipei 101. When I looked up it was in a haze of fog at the top and I hoped this wouldn’t affect our view too much.Taipei 101 was briefly the world’s tallest buildings. 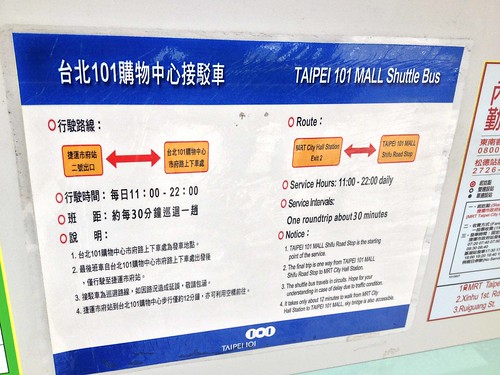 The sign for the Taipei 101 Mall Shuttle bus. The bus is free but we opted to walk. 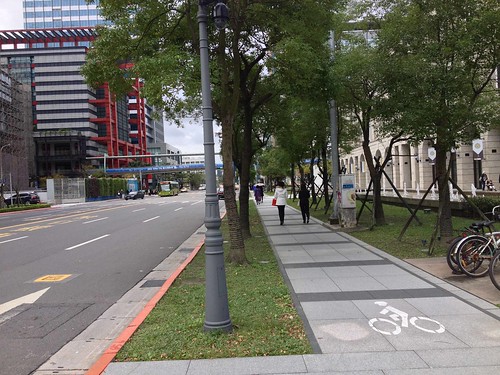 Lanes for pedestrians and cyclists. 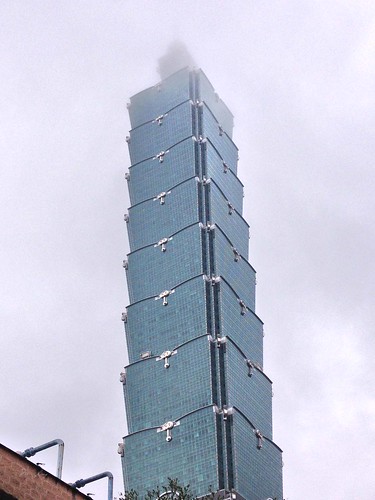 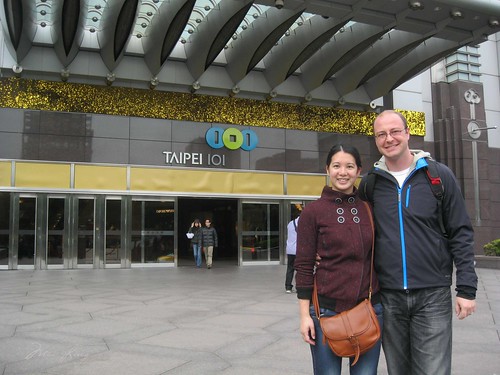 Since Dan and I have a thing for going up tall buildings and towers (e.g. see my posts on New York, Chicago and Las Vegas) we knew we had to go. Taipei 101 isn’t just a tall building though. It’s also filled with shops and offices and a very impressive food court in the basement. When we bought our tickets the ticket lady warned us that the view wouldn’t be as good today due to the fog. We figured since it was our last day we might as well go up. 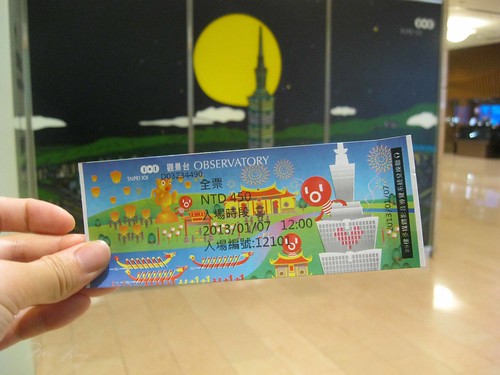 At the top of Taipei 101 we were given complimentary handsets set to our preferred language. The handsets matched up with the numbers in the observation deck so we could learn more about any landmarks and the view from each spot. 101 was very relaxing with loungy chairs and I also had a cold milk tea (tapioca bubbles weren’t ready yet so it wasn’t bubble tea) while we were up there. We also learned about how the building was constructed and the damper system to help protect it from earthquakes. 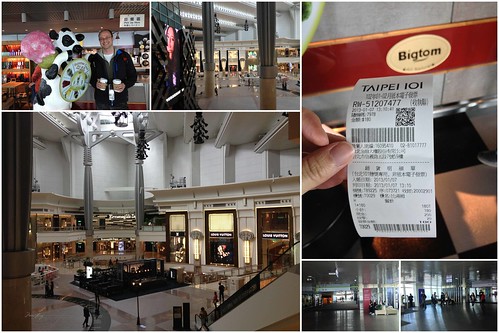 Insid Taipei 101. Beautiful mall at the bottom. Comfortable and roomy observatory deck at the top. 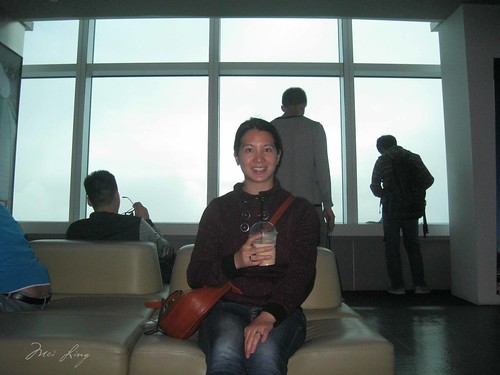 Enjoying an iced milk tea while relaxing in Taipei 101.

They let us know that the outdoor part of the observation deck was safe to access so we went up even higher to check it out. The stairwells listed other famous tall landmarks and how they compared to 101. It was neat to see how the CN Tower stacked up. 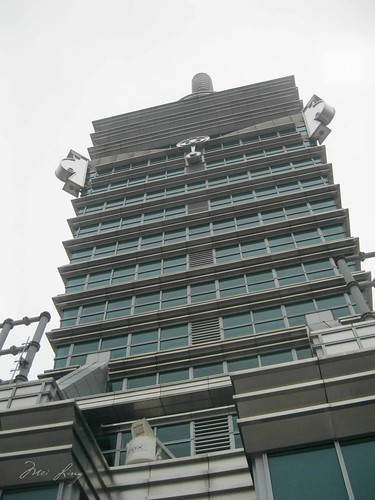 I took this picture from the outer observatory. 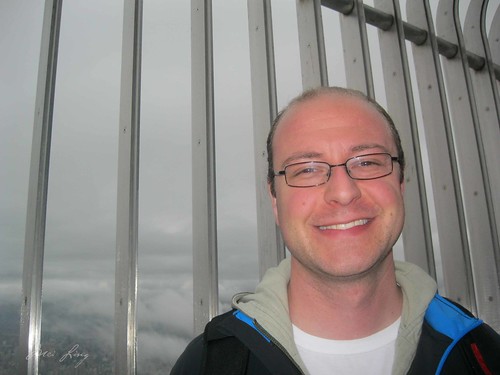 Dan on the outer observation deck at Taipei 101. 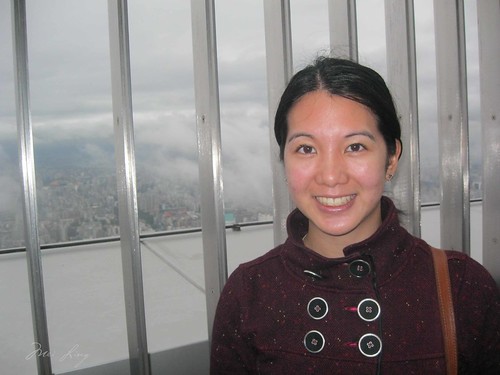 Me on the outer observation deck. Still foggy! 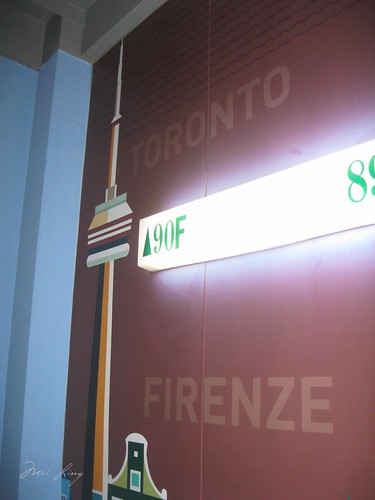 How the CN Tower compares to Taipei 101. 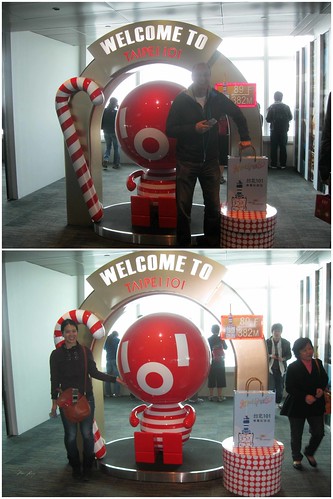 Cheesy pictures of us with the “damper babies.” These dampers help keep the building earthquake proof! 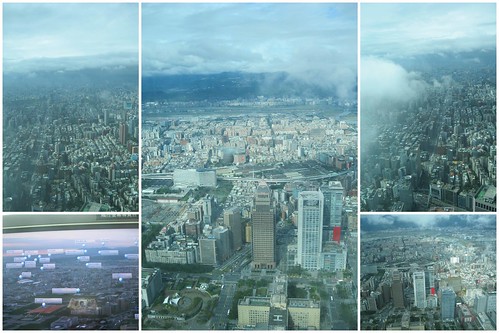 The view from Taipei 101. Even with the fog it was pretty good! 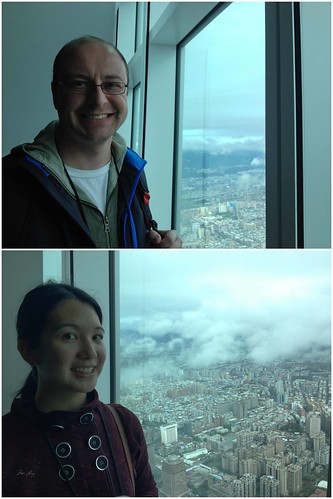 Checking out the view.

After watching some informative films on how 101 was constructed and soaking in the view, we headed out. To exit we had to go through their gift shop, which included intricate coral sculptures. I also spotted a cut out of famed Taiwan singer Teresa Teng and begged Dan to take a picture of me with her. I grew up listening to Teresa Teng and I still remember watching the Chinese news at my grandparents’ home in Toronto when she passed away. Tian Mi Mi and The Moon Represents My Heart are still some of my favourite songs (and definitely among Teresa Teng’s most famous songs). They make me feel nostalgic and happy when I hear them. 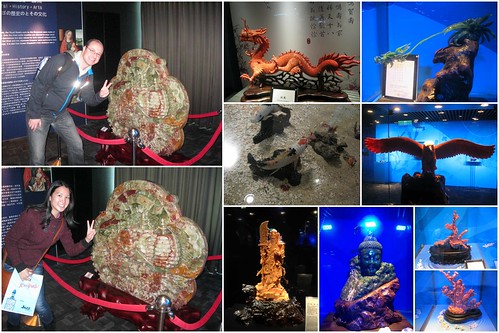 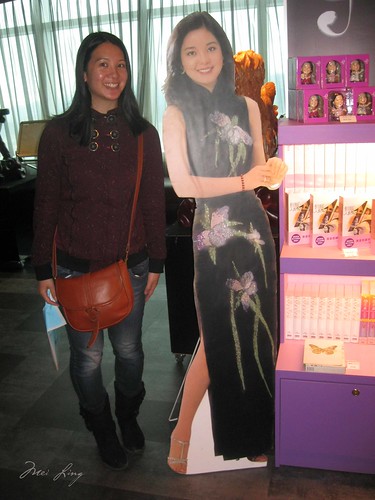 With my idol Teresa Teng. 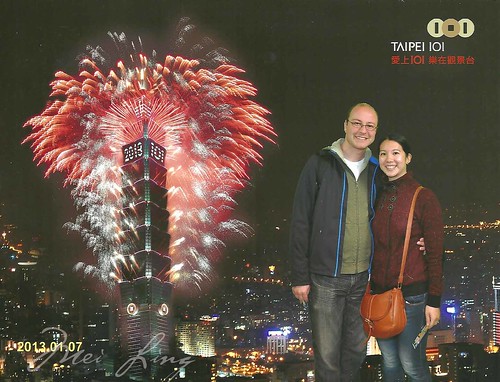 I have an affinity for cheesy tourist pictures. We couldn’t resist. 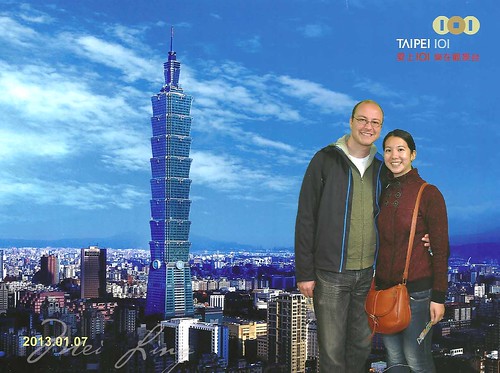 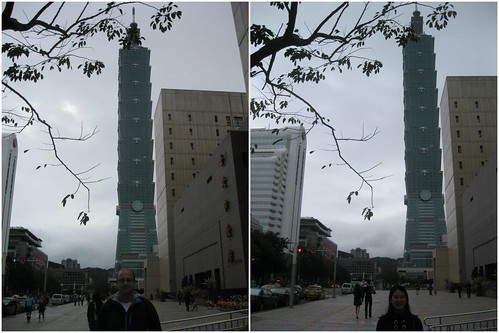 Outside with Taipei 101. See you next time!

After leaving Taipei 101 we went off to have lunch and eventually visit a night market. More on that soon.