Lucky number eight! Sunday marked my eighth half marathon when I ran the Scotiabank Toronto Waterfront race. Last year Scotia was my first full marathon and I have to say that I love this race event. I love the route for the half, the crowd support and the energy. This is a race that I can definitely run every year.

Kelly and I after finishing the Scotia Toronto Waterfront Half Marathon. It was almost one year to the day from when we ran our first full marathon together.

The day started off in a nice relaxed way. I got up at 6:30 a.m., had a quick breakfast and got dressed. Dan and I walked to the start area and took some pictures. I knew that Kelly, Brian and Kevin (who will forever be known as “sexy Chad“) were also running the Scotia half so I texted Kelly and we agreed to meet up. She was by the bag check area so I suggested meeting in the friends and family section. As we were waiting I saw the elites come out and head to the start line. It was exciting to see them. After a while Dan started to get anxious so we started heading over to the corrals. I texted Kelly again and she told me to just go to my corral. As I was walking over to it I realized that it was almost impossible for them to get from the bag check area to the friends and family meeting section because they’d have to walk through the corrals. Next time I’ll rethink the meeting spot! 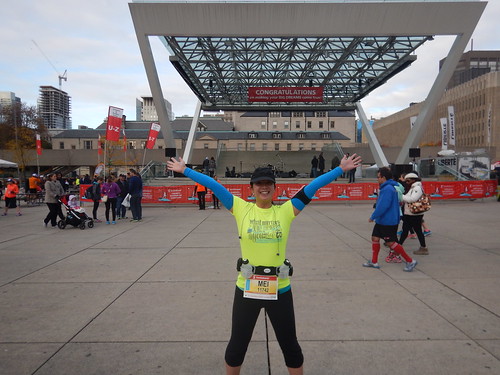 Me by the stage in the start/finish area in Nathan Phillips Square. 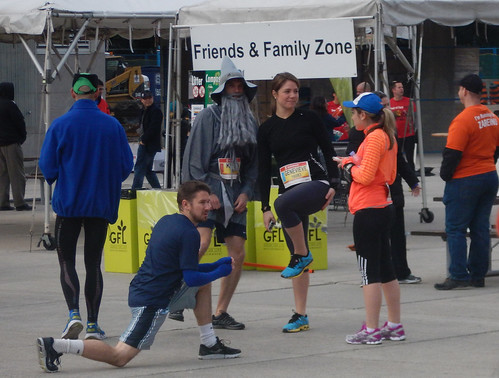 We noticed Gandalf stretching nearby. There were a lot of people dressed up, which was awesome.

Getting to the corral was well signed and well organized. I was supposed to run in the blue corral (finishing time of 2 hours to 2:19) because Dan was originally planning on running the full marathon. I had wanted to run the first half with him and had intended on training to get my half time down to that pace. Unfortunately Dan is recovering from an injury so he couldn’t run the marathon and as you know, my training also hasn’t gone as planned. I decided to switch and join the green corral. There were people spilling out of all of the corrals as I walked down so eventually I gave up and decided to run in the last corral (the purple corral). I also knew that Kelly was in that corral and thought that I might see her. This may sound a little impossible because 25,000 people were running that day, but I just had a feeling that we would find each other. We’d even described what we were wearing to each other. I got into the corral and a few minutes later got a text from Kelly telling me she was at University and Adelaide. I looked up at the nearby street sign and realized that that was where I was so I started to look for her. Finally, a little ahead of me, she waved and I came over. It was so great to see her and I was so happy that she’d found me! Kevin was there too so we got him to take a picture. Kelly and I also commented on how we couldn’t believe it had been a year since we ran our first marathon together. Kevin and Kelly’s training hadn’t gone according to plan either so we all agreed that our goal was to finish. Meanwhile Brian was up ahead with a goal time. Kelly mentioned that he was hurting because he and Kevin did the CN Tower stair climb the day before! I can’t believe they did that! 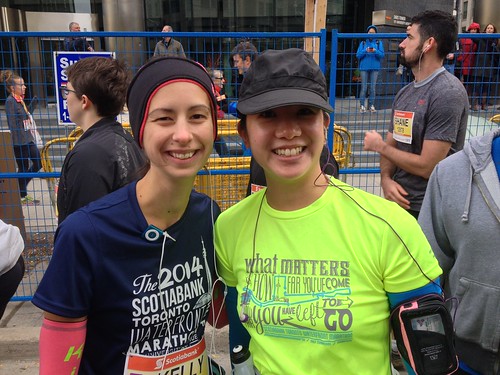 Kelly and I in our corral. I don’t know why my hat was on so funny. Oh well.

Soon we were off. We saw Dan and he picked up the camera but yelled that we were too fast for a picture. After that we saw another spectator screaming “You’re almost there!”, which gave everybody a good laugh. 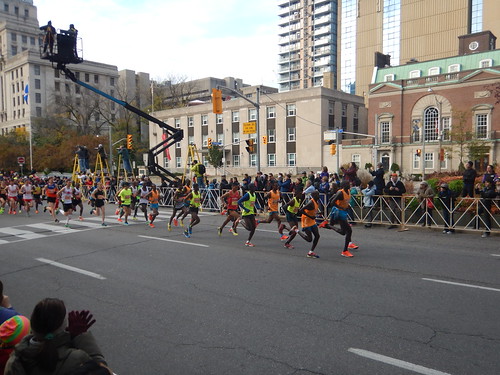 Dan took this picture of the elites. They were like gazelles.

The first part of the race was good. We ran up to the ROM Crystal again and then across Bloor Street to Honest Ed’s. We talked the whole time about our vacation plans, fitbits, future runs etc. Kevin and I had fun running on the streetcar tracks because they were nice and smooth and well maintained. Kelly mentioned that this year there didn’t seem to be as many people out and I said that it was because Arlene wasn’t with us (no Arlene means no fan club). Last year by that point at least ten strangers had already cheered for her name.

As we ran down Bathurst Street I saw the best sign that I’ve ever seen at a race. Someone was holding up a drawing of Ryan Gosling’s face as a sign and someone else was holding up a quote mark saying “Hey Girl…You’ve got a beautiful pace.” I couldn’t stop smiling. I saw the sign again at around 19 k and cheered and they smiled at me. 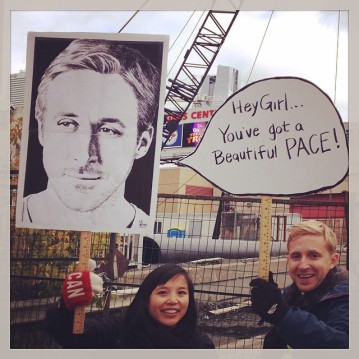 We ran past Fort York and then came the long run down Lakeshore Road and back again. By this point the wind had picked up and we talked about how we were so lucky to have perfect weather conditions last year. The part on Lakeshore is an out and back section so we could see the runners in the first corral headed back. They were so fast, effortless and smooth. As we approached the turnaround Brian yelled out (he was on the other side) and mentioned that he’d lost his hat so we should look out for it. We looked for it but never found it. An upbeat song came on my iPhone so I lost Kelly and Kevin. I’m not sure if I sped up or if they slowed down (or a bit of both) but I didn’t see them again until after we all crossed. I felt pretty good during the second half of my half. I ran past a woman dressed in full fire fighter gear and later found out that she broke the Guinness Book of World Records for fastest marathon in a firefighter suit! Amazing! I also ran past someone who had a graduate gown and robe on and someone whose shirt said “I’m 23!” on the back. I was excited for all of them. I was feeling good at this point and in my head the words “Beast Mode!” kept playing over and over again. Don’t ask me why. I think weird things while I run. At 20k I started cramping up, which was really annoying. It was also the point where course marshals were calling “Half marathoners to the left. Full marathoners to the right.” It was like music to my ears and I was so happy to go to the left this year. Last year at this point I remember thinking “What was I thinking?!” For the last 500 metres my legs cramped badly and I slowed down. I’ve seen the video and I look rough. The crowd was amazing though and people everywhere were screaming my name. A runner passing me even screamed “Keep going Mei! You’re doing good!” I loved all of the encouragement. With the last 100 metres my legs were in horrific cramping pain but I knew that it was going to be on video and I refused to limp across the finish line so I gritted my teeth and went for it. I was so happy when I finished and also very pleased with my time. Given my lack of training, I had decided that if I could finish in around 2:30 I would be happy (last year I finished the first half of my marathon in 2:16 so I figured with barely any training maybe I could be done in 2:30). I was pleased to finish in 2:28. Not a personal best but also not a personal worst. 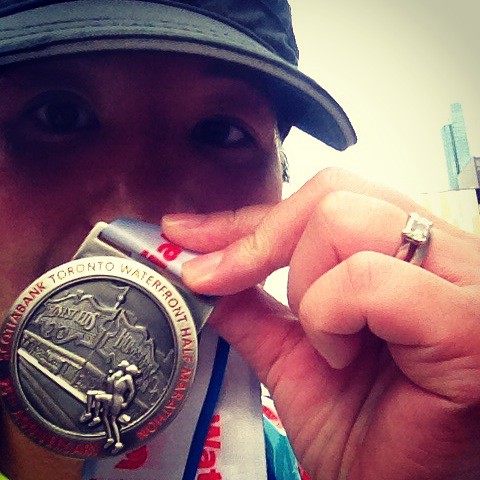 Me with my new half marathon medal. I love it.

After I finished I watched Kelly, Brian and Kevin cross. Kelly and Kevin had found Brian, whose foot was killing him. Given they had done the stair climb the night before and also hadn’t really trained, they all finished in a decent time. After getting some food and warming up, we met up with Dan and took pictures. Dan ended up texting me asking if I was still running (if I had been it would have put at finishing the half in over 3 hours!). It turns out he was standing near the finish and missed seeing me finish, but he had seen Kelly finish and continued to wait for me! He was mad that he missed me but glad that I didn’t take so long to cross. 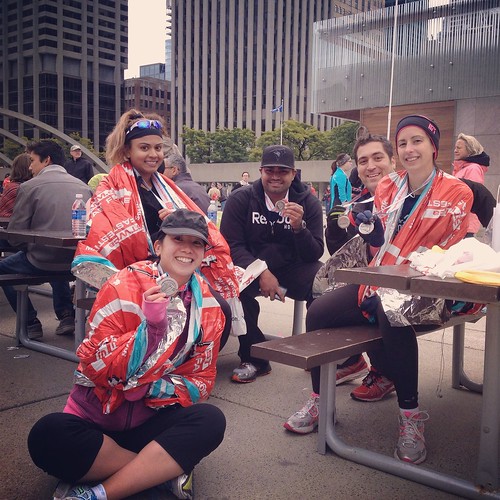 After our pictures, we all said goodbye. Dan had to meet up with friends nearby so I ended up walking home alone with my foil cape draped over my shoulders and flapping in the wind. Someone walking his dog saw me and gave me the thumbs up. Overall I felt great and can’t wait to run this race again next year! Now to decide whether I should do the half or the full… 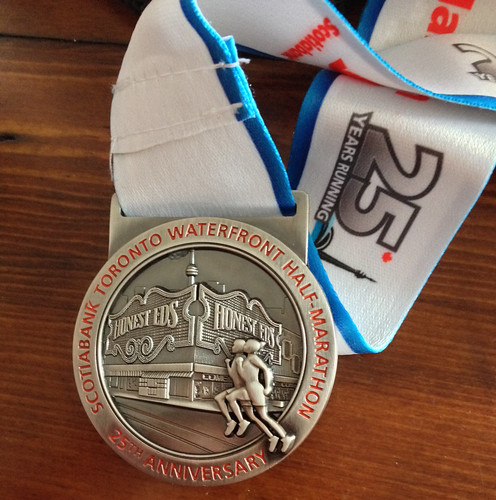 Last look at my medal. This year it has Honest Ed’s on it (a staple landmark in Toronto).