After getting crushed by Around the Bay last year, I was hungry for redemption. During marathon training I could run 30k one hour faster than I did at Around the Bay. I knew I could do better.

I bought this “I defeated the Reaper” shirt to wear after the race. It seemed appropriate. This year’s race shirt was purple! (Last year’s was beautiful watermelon pink).

Unfortunately things don’t always go according to plan. As I’ve mentioned before, this winter has been brutal, making training more difficult than usual. Despite my best efforts, I went into Around the Bay this year feeling like I wasn’t ready. I finally decided to be realistic and went into the run thinking that I would keep it slow and easy and try to enjoy as much of it as possible.

Me at the Around the Bay expo.

As I mentioned last year, the atmosphere at Around the Bay is amazing. It’s the oldest road race in north America (older than the Boston Marathon by 3 years) and steeped in tradition. This year was its 120th year and it felt amazing to be part of history. Since Dan was injured this year he sold his bib to Arlene. One of my coworkers was also not able to run so she sold her bib to Kelly. So it worked out perfectly! Lucky me! I had two running friends join me at Around the Bay. 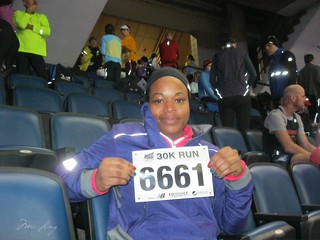 Arlene with the race bib number that she inherited from Dan. She kept calling it 666+1 Devil.

We didn’t have a clear meeting spot and just agreed to text each other. With over 10,000 people registered to run, this probably wasn’t the smartest idea. Somehow we all found each other though. 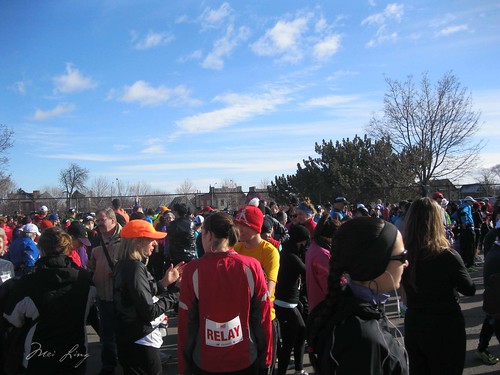 Not sure how we all found each other in the crowd. Small miracles.

Kelly’s husband Brian was also running the 30k, along with their friend Sexy Chad. Sexy Chad’s real name is Kevin, but Brian introduced him as Sexy Chad because he bought his race bib last minute from somebody whose email address had “sexy chad” in it. So even though we all know his name is Kevin, and he reminded us several times, he will forever be known as Sexy Chad. 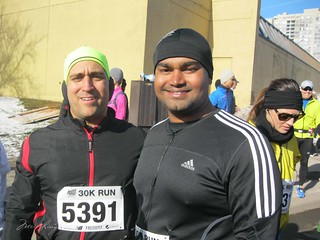 Brian and Sexy Chad (aka Kevin) 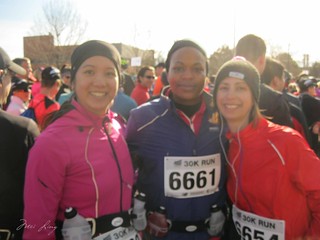 Me, Arlene and Kelly before the race.

I couldn’t believe the beautiful weather. It was even warmer than last year and I thought last year’s weather was amazing! I was slightly overdressed because I didn’t know how windy it would be, especially by the water. I almost ditched my jacket at the last minute but Dan convinced me to wear it just in case. 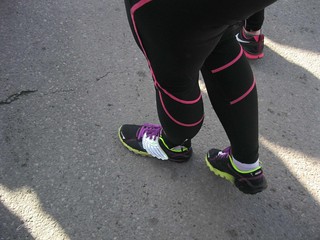 I loved the wings on Kelly’s shoes.

The race started out well. We ran slightly behind the 3:30 pace bunny and seemed to be keeping up for the first few kilometres. He was doing 10 and 1s, but I didn’t want to walk, so every time he walked I kept running. Everybody inevitable caught up with me though. Kelly and Arlene were doing 10 and 1s and kept catching up to me, so I kept looking out for them and ran with them whenever possible. Brian took off near the beginning and after a while so did Sexy Chad. We were surprised to catch up to Brian pretty early on. He had an injury from running a half marathon the week before and was running through the pain. 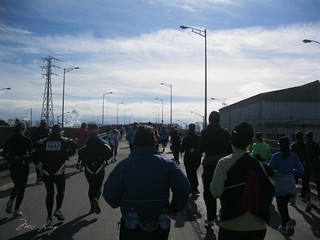 The route was slightly different this year because a train ran through it last year, delaying the race and ruining many runners’ times. The new route took what was once the relatively flat first 10k and added two overpasses to avoid any trains. Since I didn’t train properly, I definitely felt like this made things extra challenging. 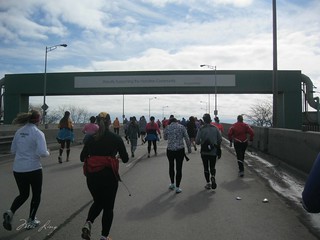 On the first overpass. 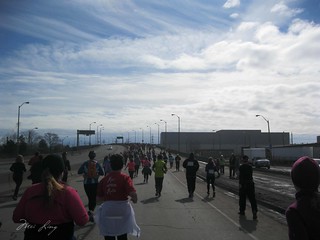 Headed to the second overpass.

We were on pace to finish in a little over 3:30 when we crossed the first timing mat at 10k. After that things started to fall to pieces. Kelly was having IT band trouble so we ran ahead while Brian stayed with her (though she kept telling him to run ahead). My hamstring started to get tight so I slowed down and walked at the next water stop. That’s when I lost Arlene. The next 5k was unusually slow for me, but that may also be because I stopped for a bathroom break. When I got out of the porta potty I wondered if Brian and Kelly had passed me. I decided to keep an eye out for everyone as I tried to catch up. 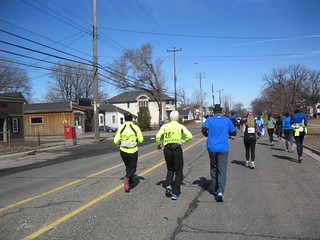 It was his 26th Around the Bay! Awesome!

At 15k I couldn’t believe how slow my time was and threw any time goals out the window. Instead I focused on taking pictures, high fiving the crowd and reading all of the motivational signs. We ran through “Tin Pan Alley”, which was really more like a few families banging on pots and pans and playing kazoos. It was still fun though and I appreciated them for doing that. 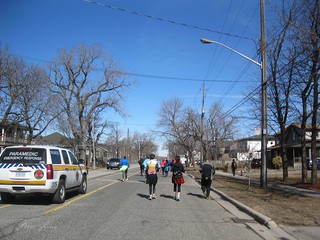 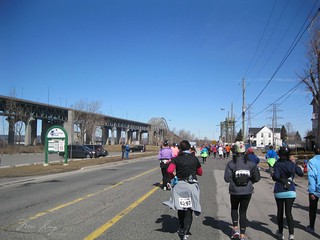 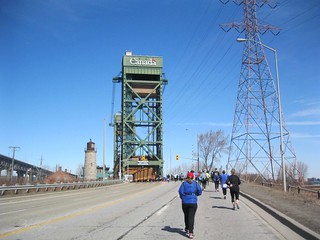 Just past the 15k mark you run up this hill to the bridge. 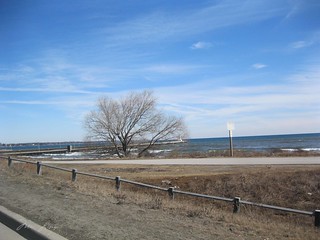 This is the view as you run up. Not bad. 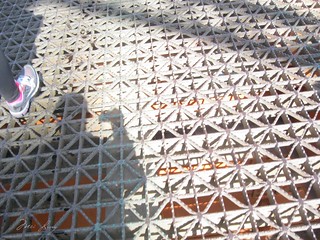 You have to run on the grate on the bridge. Don’t look through the holes.

The rolling hills in the midsection of the route were challenging but I managed to  run them slowly. I didn’t want to have to tell Dan later that I walked any hills. Unfortunately this year there was nobody playing the Rocky theme song and no signs saying “Don’t poop your pants!” One of my favourite signs this year said “What does the fox say? run run run run run run run!” Brilliant.

At around 25k I could see Arlene up ahead. I can’t begin to describe how happy I was to see a familiar face. It became my goal to catch up with her and once I did I walked alongside her (my legs were starting to cramp a lot at this point so I needed the break). We stopped at the orange station and ate some orange slices. It was one of the best orange slices I ever ate. After finishing our oranges we decided to run again. 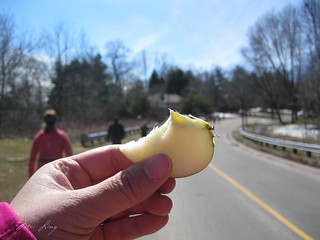 I kept having to start and stop because my right shin and calf kept tightening up. After a while I just ran through the pain and it eventually went away. I was ahead of Arlene again but I knew that she was right behind me. We reached the small wooden bridge and I felt a sense of accomplishment. Last year at this point I could barely walk. This year I could barely run, so that was definitely an improvement! Then came the worst hill of them all. I tried to run up it but my legs cramped too badly so I decided to walk like everybody else. Partway up I took a sip of water and it went down my throat the wrong way, causing me to cough and my whole body to hurt. I was in rough shape. 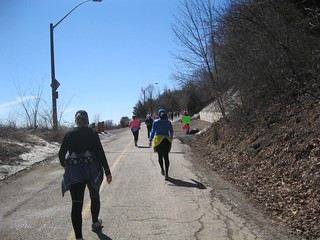 Part of the last horrible hill. You turn to the right and all you see is more hill that’s steeper than the first part. 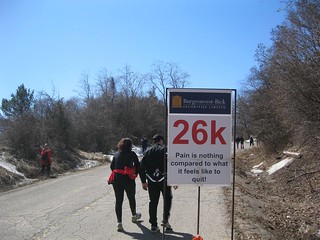 I loved this sign. Good point. “Pain is nothing compared to what it feels like to quit.”

Arlene caught up with me again and together we ran to the 27k mark. She was still optimistic about finishing in under 4 hours, but at this point I knew it wasn’t going to happen. This was mostly because I knew I wanted to stop and take a picture with the Grim Reaper.

Me with the Grim Reaper. Nice guy.

Between 27k and 28k my wish came true. I found the Grim Reaper and got a picture with him. He was really pleasant, though he told me to “sprint the last 2k or I’ll chase you.” Yikes. Arlene had passed me while I was getting my picture taken so I started to  run slowly again and eventually caught up. This is basically what all of our races are like lately, with the two of us playing leap frog. It definitely helps keep me motivated.

We ran most of the last 2k together until Arlene slowed a little and told me to go ahead. I ran into Copps and across the finish line. When I turned around Arlene was right behind me so we hugged and then high fived. It was a great feeling to finally be done, though my finishing time was only 9 minutes better than last year (and last year I was injured!). 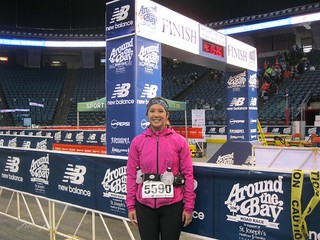 Me at the finish.

Neither of us heard our names called as we finished and I found out from Dan that it was because somebody proposed at the 25k mark and was getting married by the finish! They started the ceremony right as I was crossing. Oh well, I guess that’s an ok reason not to hear your name. 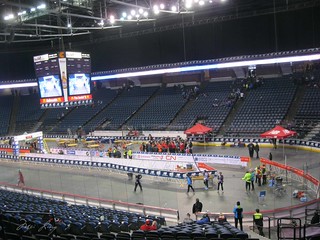 That small crowd of people is surrounding the couple getting married. They were blowing bubbles in celebration at this point.

We went through the finishing chute, which had a generous helping of food. After stretching and taking some pictures we went back to the seating area in Copps to look for Dan. On our way we ran into Sexy Chad, who managed to finish in 3:30 something! Pretty good for his first time running 30k (and also given how challenging the Around the Bay route is)! He asked us if we knew where Kelly and Brian were. After looking around we realized that they might still be on the course since they were both injured. We decided to stick around and wait. 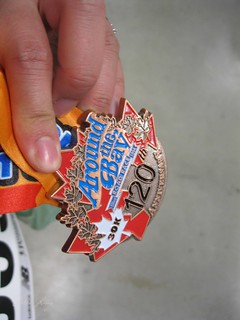 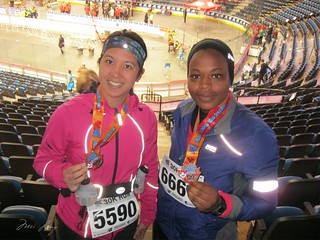 Arlene and I after the race. We survived!

I’m happy to say that despite their injuries Kelly and Brian both finished. They crossed the finish line with Kelly’s arm around Brian, using him as a crutch. It reminded me of when Dan and I ran last year (except I wasn’t to the point where I needed to lean on him). Brian gave up chasing a time goal to stay with Kelly and make sure that she finished. That was exactly what Dan did for me last year. 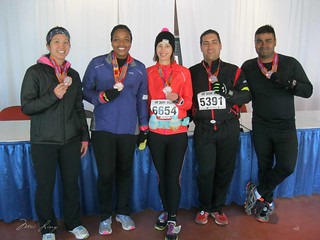 We did it! Me, Arlene, Kelly, Brian and Sexy Chad (Kevin).

So in the end, I didn’t quite get the redemption that I was looking for and even though Around the Bay beat us all up pretty badly (except for Sexy Chad who finished a lot faster than us), I still had fun. After running I told everybody that I was done and would be doing the relay next year. Less than an hour later I was already dreaming about running the 30k in another attempt for redemption. Who knows how many times Around the Bay will have to beat me up before I finally give up (or conquer it)?

This year they also had food trucks at the race, which was awesome! After the run Dan got us grilled cheese sandwiches from Gorilla Cheese. It was one of the best post-race snacks I’ve ever eaten. 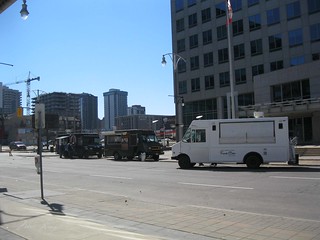 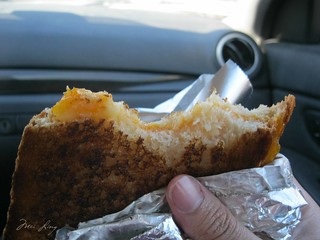 This was tweeted by @SteveWLayton. It was so true.

As you can see by my picture, I got some sun. 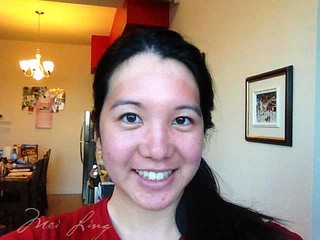 Here’s a last look at Daisy with my medal.