My last race in 2015 was the Tannenbaum 10k, which is organized by the Toronto Beaches Running Club (BRC). This year marked its 10th anniversary and it was the biggest one yet with over 1,000 participants signed up and the introduction of a kid’s race. Although the race is growing, it still retains its small local feel. It is also professionally chip timed and attracts the likes of Canadian Olympic marathon runner Krista Duchene (the reason why I will never win my age category in this race. That and my lack of speed!) and boasts a flat and fast race course. They also provide free race pictures that are taken by volunteers (some are local professional photographers who volunteer their time and services). The race kit is also one of the best, with goodies galore. I pigged out on the bag of chocolate covered Werther’s in this year’s kit and the coveted race toque is still keeping my head warm. 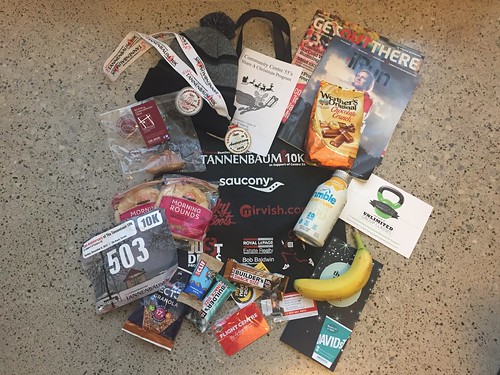 The Tannenbaum 10k race kit (plus my medal).

Now that I’ve been running in The Beaches for a year, running this race, with its familiar territory and familiar faces, was like coming home. The race course is one of my regular running routes and I know it like the back of my hand. I’m friends with several members of the BRC who were volunteering at the race. I didn’t even have to give them my name when I picked up my race kit (Olivia and Dave were running race kit pick up on the night that I went). I saw Maureen at the food station, Martin was getting the kids to the races and Isabelle, Jose and Dave were all marshalls on the race course. The added advantage to this is you get people on the course who will cheer for you by name.

The last time I ran this race, I didn’t know anyone else who was running it. Now I was surrounded by fellow Beaches runners and runners who I have met in the community and on social media. Dan didn’t run the race and instead met up with others at the Beaches Running Room to run their own 10k. I met up with Nanlee and we walked to the starting area where we randomly found Beth, Sam and Karen. I love how at some races you can just find everybody without planning a meeting spot. We all wished each other luck before starting the race.

During the first kilometre we were hit by a strong headwind and I said to Sam “A headwind now means a tailwind later right?” and she agreed. Then we all split up. I could see Nanlee up ahead but I couldn’t catch her. 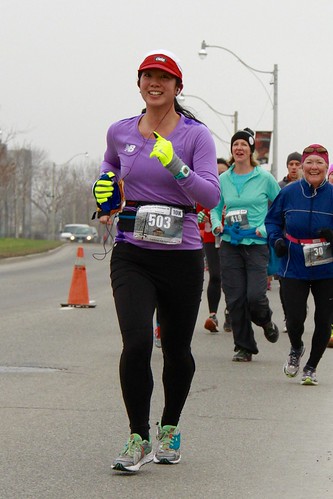 At the 2k point on Lakeshore. Photo by Bob Baldwin.

The race course took us through the Martin Goodman Trail in the Beaches, across Lakeshore and down Leslie Street to the spit (Tommy Thompson Park). We ran a few kilometres onto the spit and then turned around and ran back. As I was heading onto the spit, I started to see faster runners heading back. I remember making eye contact with Christine, who was running a strong race, and waving. This is my favourite part of out and back courses. I love cheering for the faster runners on their way back, looking out for friends and also cheering for runners behind me when I’m heading back. This is both good and bad. It’s good in that it keeps my mind off of the race, but it’s bad in that I tend to get distracted and not run as hard. I reached the 5k point in 27:38 and realized that today the latter had happened. In my last three 5k races I’ve finished in 27:03, 27:05 and 27:03. I almost feel like a metronome. With that said, I knew that I hadn’t run the first half fast enough but I had a chance to accomplish one of my goals, which was to run my first negative split. I picked up the pace and went for it. 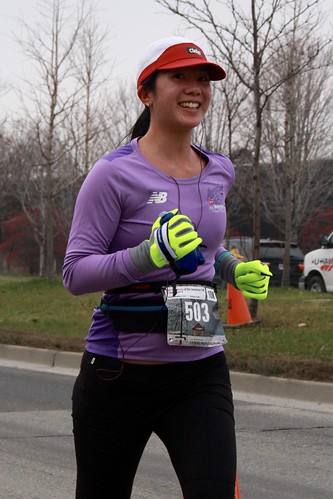 At the 8k point. Almost there! Photo by Bob Baldwin. 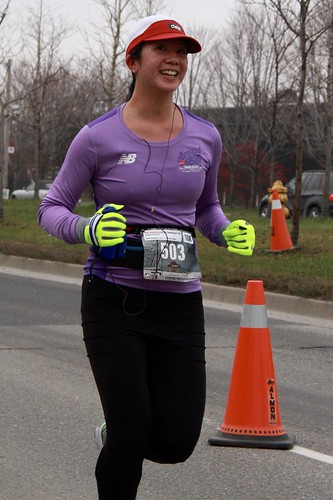 Another picture of me at the 8k point on Lakeshore. Photo by Bob Baldwin.

The second half of the race is a blur. With less than a kilometre to go I could see a woman starting to pass me out of the corner of my eye. Somebody was cheering “Run! Run! Don’t let her pass you!” I don’t know who he was yelling at (probably her) but it triggered something in me and I took off. I sprinted for the last 400 or so metres of the race. 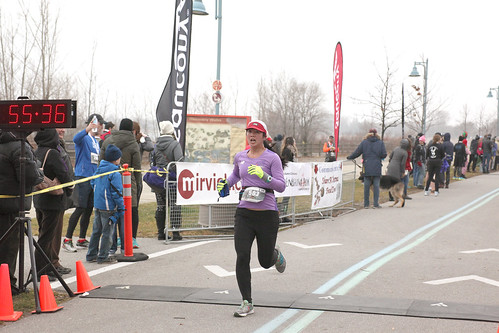 This is my new favourite finisher’s photo. Usually I take really good photos because I slow down and pose for the camera. This time I was concentrating so hard. My face says it all! Photo by Larry Lewis.

When I crossed the finish line I could almost hear Tim’s voice in my head telling me how when he sees runners sprint to the finish line (like I just did) that they obviously didn’t run hard enough during the race. Oops! Something to work on for next year. I finished in 54:43 and I was ecstatic. I accomplished my goal to run a negative split, finish my race strong and I also beat my previous Tannenbaum time of 59:39 by 5 minutes. I collected my medal (from Neil from the BRC) and immediately ran into Nanlee who had an amazing race. We congratulated each other and then cheered for Sam, Beth and Karen as they each came over the finish line. It was exciting. We also saw Nathan and Josh from our running group so we stopped and took a picture. 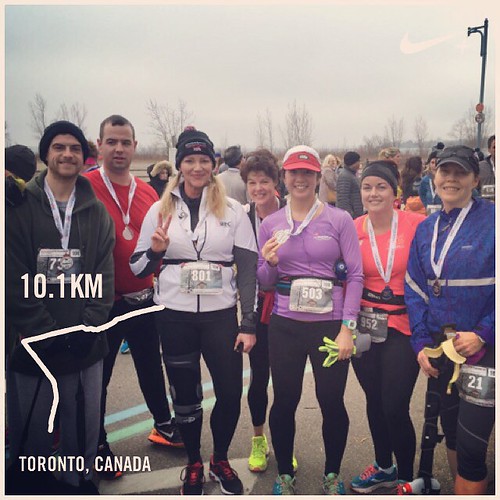 Group shot after the Tannenbaum 10k.

I grabbed some post-race food, which included bananas, morning rounds, cliff bars (two different flavours!), individually packaged pastries from Cobb’s Bakery and more. I found out later that Susan was running bag check and they had coffee and cookies there. Maybe next year. 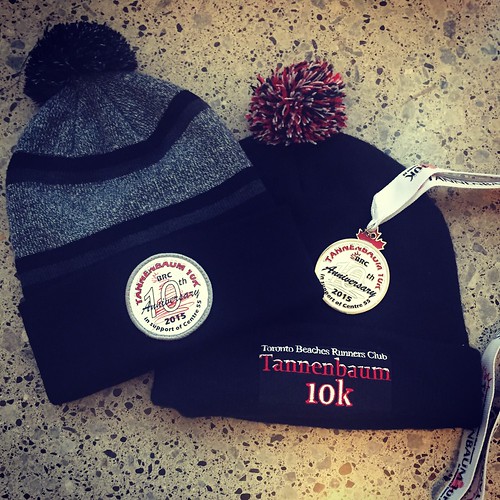 Tannenbaum is known for their fun draw prizes after the race, but we couldn’t stay because Dan, who met me after his own run, didn’t bring any warm clothes to wear! Instead, Dan, Nanlee, Sam and I went to the Sunset Grill for brunch. Maybe next year we’ll stick around and win some prizes. I liked this race before but I love it even more now and will definitely be back again.