In May 2013, Dan and I ran The Chocolate Race in St. Catharine’s. I had heard good things about this race and was especially lured by the promise of chocolate (on the course and at the finish) and pink champagne at the finish.

Me at the finish with some chocolate and my medal.

With so many goodies at this race how could I resist?

Dan and I were running late to this race and it was pretty stressful. When we arrived we found a parking spot on the road since the parking lot was full. Street parking was a breeze and race kit pick up was really easy. I had seen on Facebook that the shirts hadn’t come out as planned and that their vendor misprinted them. Instead of “I run 4 chocolate” the shirts said “I vollie 4 chocolate.” Oh well, nothing we could do. Mistakes happen and it was so close to the race when they received the shirts that it would have been impossible for their vendor to fix the mistake. I hope they got their money back. After picking up our race kits we then stood in line for a long time waiting for the bathroom. The line up took forever. I heard that there was another bathroom by bag drop off, so I went there and the line was much shorter. I also dropped off our bag. Now we were dangerously close to the start time for our 10 mile race.

We ran outside and sprinted to the race start line. It was then that I saw all of the unused portapotties in the race finishing area. If I had known, I would have used one of those. Since it was so cold out people were all indoors, which is why we didn’t see them.

We made it to the race start with minutes to spare. 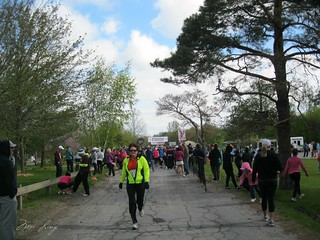 I took this picture as we arrived at the start line. We were relieved that we didn’t miss the beginning of the race. 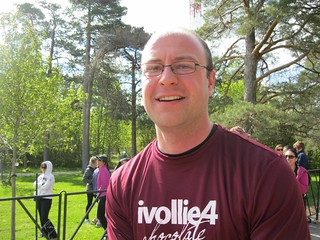 Dan was relieved that we weren’t late for the start. He hates being late.

The race itself was beautiful. I loved the route, which was challenging but scenic. It took us past the lake and through some park trails, as well as through a residential area and back again. It was challenging in that the wind was crazy and I felt like I was fighting against it for most of the run. It was also hilly. You know how I feel about hills. About 1k or 2k in they had the first chocolate station where they gave out chocolate covered marshmallows and strawberries on sticks. I stopped to eat one and then tried to run and eat it at the same time. It was harder to do than it looked. 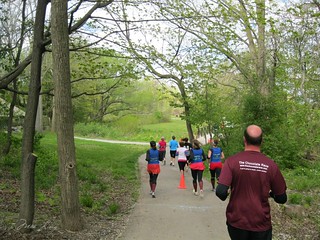 I tried to take some pictures as we were running. The women in front of us had awesome Superman/Supergirl costumes that said “Chocolate is my kryptonite.” 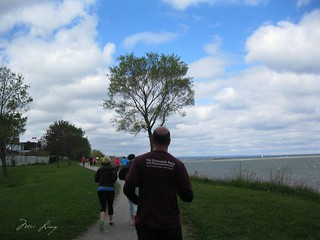 The run was scenic but very windy. 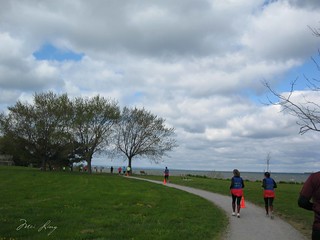 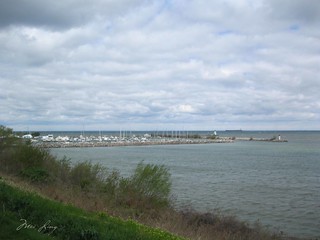 On the way back they had a truffle chocolate shot station with a few kilometres left. I missed it somehow though Dan saw it. With 1k left I also picked up another skewer of chocolate covered marshmallows and strawberries. I decided to run with it and eat it at the finish line.

Me approaching the finish line with my skewer of chocolate covered marshmallows and strawberries. It was delicious.

At the finish line we got our “I run 4 chocolate” medals (shaped like a box of chocolates) and some chocolate milk. We followed the crowd to the race finish area where we picked up our bag of goodies and our pink champagne. 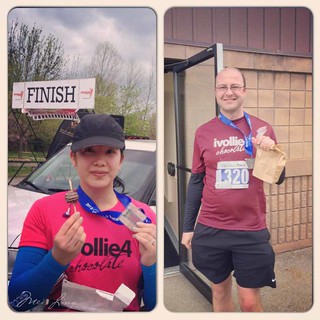 After finishing with our medals and goodies. 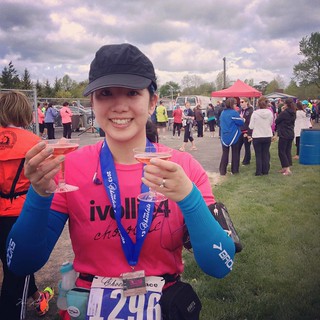 Pink champagne at the finish. A nice reward for running 10 miles.

The bag of goodies had chocolate truffles, fudge and a chocolate croissant. The best after race snacks ever. I ate them all in the car on the way home. Since it was pretty cold we didn’t stay for long after the race. This was definitely one of the sweetest races that I’ve ever been to! 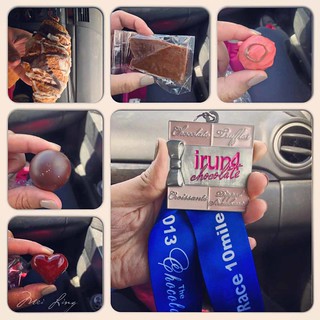 Yummy goodies from The Chocolate Race: truffles, fudge, croissant and my new medal.