The Around the Bay 30k road race in Hamilton on March 24 was our first race in 2013. I had heard many amazing things about this race, which is also the oldest road race in North America (older than the Boston Marathon by three years). Dan and I had also never run more than 21.1 k before so we were excited to challenge ourselves with a new distance. When we started training, I had every intention of training well and sticking to the plan. One week into training it all fell to pieces. First, we went on vacation for three weeks to Hong Kong and Taiwan and though we brought our running gear, surprisingly didn’t find time to go running. I know, I’m shocked too. So when we got back we spent about a week readjusting to the time change and then threw ourselves into training. I was determined to conquer this distance. After six solid weeks of training I strained my leg while moving furniture. I know, that’s pretty stupid. So I took a week off, which then turned to two weeks off. Then my grandma passed away. So that brings us to race day. Six weeks of training for a 30k. What could possibly go wrong? 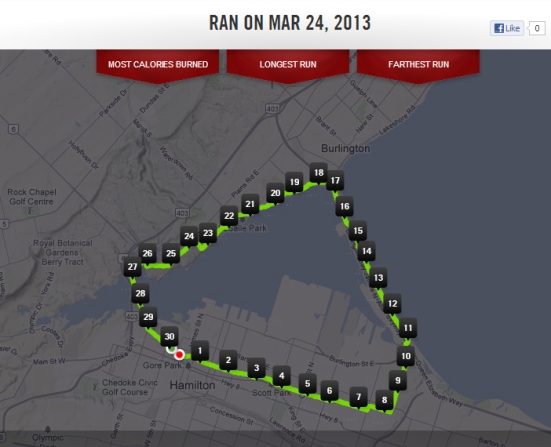 What could possibly go wrong in 30k with not enough training? My Nike Running app mapped out the course.

When my grandma passed away I had even wondered if we would still run the race. The schedule of her visitation, funeral service and interment of ashes ended up taking place in the three days before Around the Bay. All of our relatives left shortly after the interment of her ashes on March 23, so we decided there was no reason not to continue on. Plus I find running very therapeutic and after a sad and emotional few days, it was just what I needed. We weren’t able to go to the race expo, so someone who Dan knew (who was also running Around the Bay) picked up our race kits for us. We were really appreciative of this.

On the morning of Around the Bay I was really nervous (knowing that I hadn’t trained enough). I went into it knowing that we would have to walk. We picked up the race kits from Dan’s colleague, who was super excited about the race. She was running it with her husband and her friend and they had run it several times before. She was really motivating, reminding us that any time we finished it in was still a PB since we had never run this distance before. Good point!

I was also nervous because I had heard about the hills in Around the Bay. Here’s the elevation as mapped by my Nike Running app.

The race was really well organized. Parking wasn’t an issue and we got to sit inside Copps Coliseum and soak up the atmosphere as we waited for the race to start. The announcer recommended that those who were running Boston in a few weeks should take it a bit easy during the 30k so they still have something left for Boston. I found out later that Around the Bay is a popular training run for those who are doing the Boston Marathon (this explains the fast field. Pretty much everybody and their brother passed me!). I really liked waiting in Copps because it was warm and we got to use real toilets. Those things are important to me.

Thumbs up to warmth and real bathrooms before the start of a race!

Me and my timing tag, waiting in Copps.

Shortly before race time we headed out to the starting line. It took a while to work our way through the crowds of runners, but everybody was really polite. Dan and I usually don’t run together since he’s fast and I’m not, but he said he would run with me this time. As we headed into our start area, shortly behind the 3:15 pace bunny (feeling very optimistic I know), we saw a man dressed as a Monarch butterfly.

This man was amazing. Those wings and antennae were heavy. Photo by @janet_mcm

Finally it was time to go. They played really dramatic music at the start and then we were off. Within 1k I had lost sight of the 3:15 pacer. I knew that was ambitious (we had only planned to follow him for 5k or so, but that wasn’t realistic for me either). The first 10k of the race was very flat and I was amazed by all of the runners around me. A woman passed me with a sign on her back that said “Recovering from a heart attack. YOU should be passing ME!” I wanted to tell her that she was my hero. I wanted to tell everyone that they were my hero actually. I saw a man wearing an army pack running. I saw a woman running whose shirt said that it was in honour of Constable Jen Kovich. I saw a woman whose shirt said “30 minutes of CPR saved my life. Ask me how.” while her husband’s shirt said “30 minutes of CPR saved my wife’s life…” and her daughter’s shirt said “30 minutes of CPR saved my mom’s life…” They were amazing. 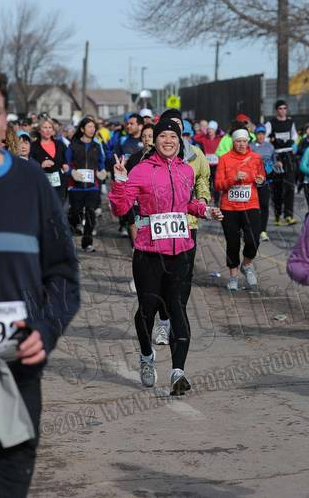 Back when I was still running and still feeling good. Note, I’m still deciding on pics to buy so as you can see by the watermark, I’m using the proofs in the meantime.

About 10k in my legs started to really cramp up. My left knee started to kill and I knew it was because of my tight IT bands. I stopped for a quick stretch and then decided to try to run for 5k intervals. At about 15k I stopped again and then I had to walk a bit. We walked up a hill and ended up on the bridge where we ran. A little after that I started walking more and running less. My legs just ached so much but I knew I had to continue. 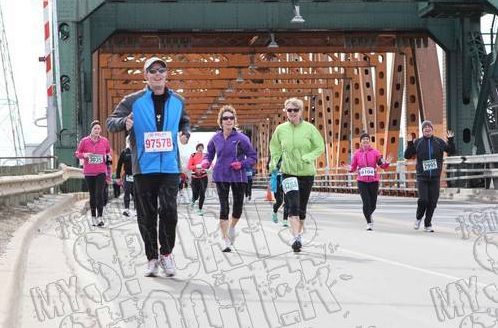 Running across the bridge. Still going.

The next 10k of the race was beautiful. We passed some road kill and someone yelled something along the lines of “mmm lunch!”, which made me laugh. We went through several neighbourhoods and the spectators were amazing. One woman had a sign at the top of a hill that said “Don’t poop your pants!” Dan loved that sign. One woman called to us “Sorry about the hill!”, which made us laugh. There was a trumpet player who played the theme from Rocky as we went up another hill, and there was a group of people who also played the theme from Rocky from their stereo on repeat. It was awesome. There was so much energy thanks to these spectators. Later on we even got to do the YMCA a little (spectators doing the YMCA while cheering for us).

After 22k I started counting down in my brain. 8k to go. That’s not too bad. That’s only 5 miles. It was the longest 5 miles of my life. I just also want to add that there were some incredible power walkers on the course. They were so fast and they became my heroes too. Since it was Palm Sunday, people outside of the church were carrying palms and waving them at us. I felt as though they were blessing us to keep going and finish the race. 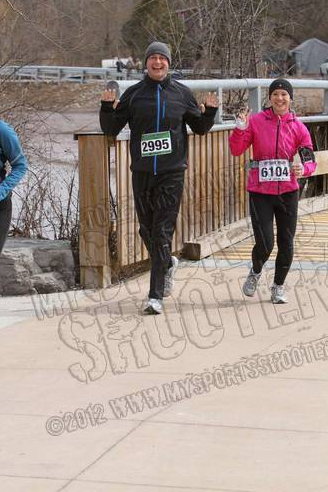 Soon we were only running whenever we saw a camera.

The last 5k were the hardest I’ve ever done. The front of my legs started to hurt from lack of training but I knew I couldn’t stop or I’d never finish. The spectators continued to be amazing as they cheered for us. Finally, we saw the Grim Reaper. He was really nice.

The Grim Reaper was really nice. Here’s an old picture of the reaper with Reid Coolsaet from a previous Around the Bay race. Photo credit: The Record. 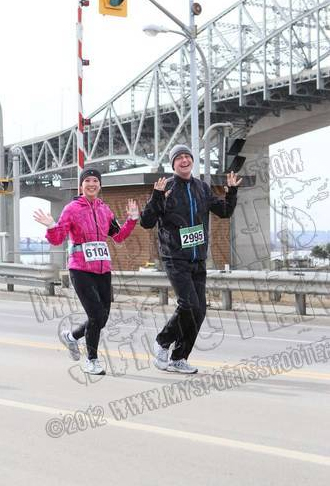 I love this picture. I’ll probably buy it. We look so happy even though we were so tired.

As we went into Copps Coliseum we started running. (I should really say “running” because it was very slow. Even for me). It was so exciting. Even though the stadium was mostly empty it was still thrilling to hear the announcer call our names as we crossed the finish line. 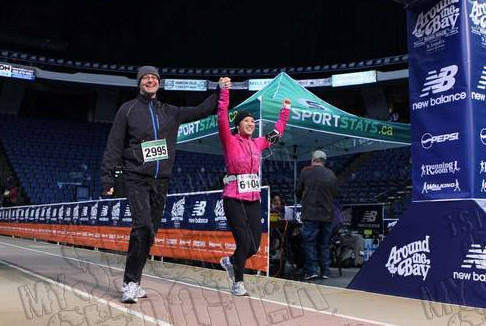 Dan made fun of me later because he didn’t know that I had raised both my arms in the air until he saw the proof. He’s just jealous because I look awesome and triumphant.

Had we trained properly and not been so distracted with everything that had happened earlier this month, I probably would have finished the run in about 3:30. Dan probably could have finished in 3 hours (or maybe even less). Anyway, we ended up finishing in 4:18, which doesn’t matter because what matters is we finished! We are both desperate for redemption now and are planning to run it again next year (now that we’ve set the bar so low I’m sure there will be another PB in the future;). 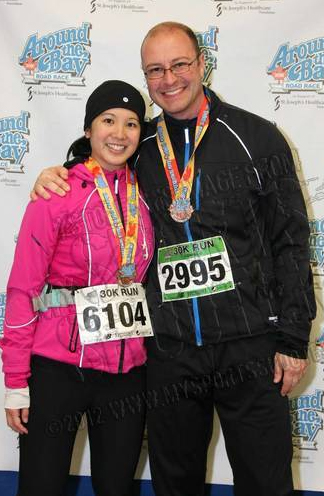 We may not have crushed it but at least we finished. Maybe next year we’ll crush it!

Despite all of the pain this was an amazing race. I loved the atmosphere, the spectators, the other runners, the inspirational kilometre markers (they had sayings on each one like “Some people don’t have guts for distance running. The polite term for them is sprinters.”), just everything. Even though I was in pain after the race I was already thinking about next year. That’s how good it was.

I dedicate this medal to my grandma.

Over a week later, I’m still thinking about the race. It was definitely what the doctor ordered (though next time, more preparation!). I can’t wait.

Now that I know what the Around the Bay shirt looks like, I keep seeing it on other runners around town. Wearing it feels like a badge of honour.

In all it was a great race. I even found out later that a train went through, making runners wait for as long as 5 minutes (even though the race organizers told CN rail about the race ahead of time). And there was also a marriage proposal! Makes me wonder what next year’s race will bring.